The Confessions of St. Augustine

“The Confessions of St. Augustine” (Latin: Confessiones) is an autobiographical work by St. Augustine of Hippo. The work describes Augustine’s sinful youth and his conversion to Christianity. It is generally recognized as the first Western autobiography ever written, and was an influential model for Christian writers throughout the following 1000 years of the Middle Ages. 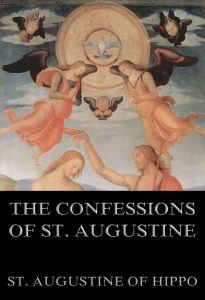 The Confessions of St. Augustine

The Confessions of St. Augustine.