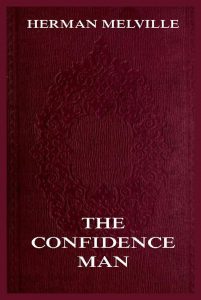 The novel’s title refers to its central character, an ambiguous figure who sneaks aboard a Mississippi steamboat on April Fool’s Day. This stranger attempts to test the confidence of the passengers, whose varied reactions constitute the bulk of the text. Each person including the reader is forced to confront that in which he places his trust.

The Confidence-Man uses the Mississippi River as a metaphor for those broader aspects of American and human identity that unify the otherwise disparate characters. Melville also employs the river’s fluidity as a reflection and backdrop of the shifting identities of his “confidence man”.

The novel is written as cultural satire, allegory, and metaphysical treatise, dealing with themes of sincerity, identity, morality, religiosity, economic materialism, irony, and cynicism. Many critics have placed The Confidence-Man alongside Melville’s Moby-Dick and “Bartleby, the Scrivener” as a precursor to 20th-century literary preoccupations with nihilism, existentialism, and absurdism.

Melville’s choice to set the novel on April Fool’s Day underlines the work’s satirical nature and reflects Melville’s worldview, once expressed in a letter to his friend Samuel Savage: “It is—or seems to be—a wise sort of thing, to realise that all that happens to a man in this life is only by way of joke, especially his misfortunes, if he have them. And it is also worth bearing in mind, that the joke is passed round pretty liberally & impartially, so that not very many are entitled to fancy that they in particular are getting the worst of it.”

The work includes presumed satires of 19th century literary figures: Mark Winsome is based on Ralph Waldo Emerson while his “practical disciple” Egbert is Henry David Thoreau; Charlie Noble is based on Nathaniel Hawthorne; Edgar Allan Poe inspired a beggar in the story.