The History of Cook County, Illinois – Weston A. Goodspeed

In this book the author, Weston A. Goodspeed, and the editor, Juergen beck, offer a general survey of Cook County history, including a condensed history of Chicago and special account of districts outside the city limits, from the earliest settlement to the time of the turn of the 20th century. There is hardly a book that contains more information and is more complete than this edition with more than 540 pages full of facts and data. 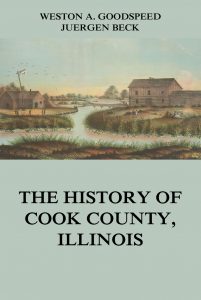