The History of Freedom and other Essays

The History of Freedom and other Essays – John Emerich Edward Dalberg

This volume must be regarded not as the support of an existing reputation, or as a bid for the establishment of posthumous renown, but as the record and memorial of a rare and attractive personality. The accurate, insatiable, and broad-minded student is revealed ; the generous champion of a noble cause which has suffered temporary defeat is seen on the field of his eager endeavour in controversy with Popes and Cardinals for the sake of freedom and truth ; and the principles which he brought to the study of history or elicited from his observation of men and affairs throughout the centuries are set forth for all to read. This is the annotated edition including several hundred footnotes. 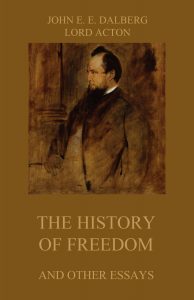 The History of Freedom and other Essays

The History of Freedom and other Essays.