The History Of Scotland – Volume 3: From the early 17th century to the death of Dundee

The History Of Scotland – Volume 3: From the early 17th century to the death of Dundee – Andrew Lang

This is volume 3, covering the time from the early 17th century to the death of Dundee. In four volumes of more than 1500 combined pages the series “The History of Scotland” deals with something less than two millenniums of Scottish history. Every single volume covers a certain period in an attempt to examine the elements and forces which were imperative to the making of the Scottish people, and to record the more important events of that time. 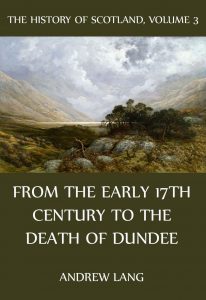 The History Of Scotland – Volume 3: From the early 17th century to the death of Dundee

The History Of Scotland – Volume 3: From the early 17th century to the death of Dundee.