The History of the Abolition of the African Slave-Trade

This book, here in an edition with both original volumes, is widely considered as Clarkson’s most important work. Thomas Clarkson was an English abolitionist, and a leading campaigner against the slave trade in the British Empire. He was not only instrmuental in achieving the passage of the Slave Trade Act of 1807, which ended British trade in slaves, but also campaigned for the abolition of slavery worldwide. 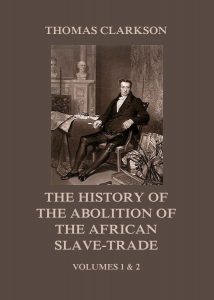 The History of the Abolition of the African Slave-Trade

The History of the Abolition of the African Slave-Trade.

Encouraged by publication of Clarkson’s essay, an informal committee was set up between small groups from the petitioning Quakers, Clarkson and others, with the goal of lobbying Members of Parliament (MPs). In May 1787, they formed the Committee for the Abolition of the Slave Trade. The Committee included Granville Sharp as Chairman and Josiah Wedgwood, as well as Clarkson. Clarkson also approached the young William Wilberforce, who as an Anglican and an MP was connected within the British Parliament. Wilberforce was one of few parliamentarians to have had sympathy with the Quaker petition; he had already put a question about the slave trade before the House of Commons, and became known as one of the earliest Anglican abolitionists.

Clarkson took a leading part in the affairs of the Committee for the Abolition of the Slave Trade, and was tasked to collect evidence to support the abolition of the slave trade. He faced much opposition from supporters of the trade in some of the cities he visited. The slave traders were an influential group because the trade was a legitimate and highly lucrative business, generating prosperity for many of the ports.

Liverpool was a major base of slave trading syndicates and home port for their ships. In 1787, Clarkson was attacked and nearly killed when visiting the city, as a gang of sailors was paid to assassinate him. He barely escaped with his life. Elsewhere, however, he gathered support. Clarkson’s speech at the collegiate church in Manchester (now Manchester Cathedral) on 28 October 1787 galvanized the anti-slavery campaign in the city. That same year, Clarkson published the pamphlet A Summary View of the Slave Trade and of the Probable Consequences of Its Abolition.

Clarkson was very effective at giving the Committee a high public profile: he spent the next two years traveling around England, promoting the cause and gathering evidence. He interviewed 20,000 sailors during his research. He obtained equipment used on slave-ships, such as iron handcuffs, leg-shackles, and thumbscrews; instruments for forcing open slaves’ jaws; and branding irons. He published engravings of the tools in pamphlets and displayed the instruments at public meetings.

Clarkson’s research took him to English ports such as Bristol, where he received much data from the landlord of the Seven Stars pub. (The building still stands in Thomas Lane.) He also traveled repeatedly to Liverpool and London, collecting vital evidence to support the abolitionist case.

Clarkson visited The Lively, an African trading ship. Although not a slave ship, it carried cargo of high quality goods: carved ivory and woven textiles, beeswax, and produce such as palm oil and peppers. Impressed by the high quality of craftsmanship and skill expressed in these items, Clarkson was horrified to think that the people who could create such items were being enslaved. He bought samples from the ship and started a collection to which he added over the years. It included crops, spices and raw materials, along with refined trade goods.

Clarkson noticed that pictures and artifacts could influence public opinion more than words alone. He began to display items from his collection of fine goods to reinforce his anti-slavery lectures. Demonstrating that Africans were highly skilled artisans, he argued for an alternative humane trading system based on goods rather than laborers. He carried a “box” featuring his collection, which became an important part his public meetings. It was an early example of a visual aid.

He rode by horseback some 35,000 miles for evidence and visited local anti-slave trade societies founded across the country. He enlisted the help of Alexander Falconbridge and James Arnold, two ship’s surgeons whom he met in Liverpool. They had been on many voyages aboard slave ships, and were able to recount their experiences in detail for publication.

Clarkson also continued to write against the slave trade. He filled his works with vivid firsthand descriptions from sailors, surgeons and others who had been involved in the slave traffic. In 1788 Clarkson published large numbers of his Essay on the Impolicy of the African Slave Trade (1788). Another example was his “An Essay on the Slave Trade” (1789), the account of a sailor who had served aboard a slave ship. These works provided a grounding for William Wilberforce’s first abolitionist speech in the House of Commons on 12 May 1789, and his 12 propositions.

Olaudah Equiano (Gustavus Vassa) published his memoir, one of the genre of what became known as slave narratives – accounts by slaves who achieved freedom. As an African with direct experience of the slave trade and slavery, Equiano was pleased that his book became highly influential in the anti-slavery movement. Clarkson wrote to the Rev. Mr. Jones at Trinity College, to introduce Equiano to him and the community. He asked for aid from the Rev. Jones in selling copies of the memoir and arranging for Equiano to visit Cambridge to lecture.

In 1791 Wilberforce introduced the first Bill to abolish the slave trade; it was easily defeated by 163 votes to 88. As Wilberforce continued to bring the issue of the slave trade before Parliament, Clarkson traveled and wrote anti-slavery works. Based on a plan of a slave ship he acquired in Portsmouth, he had an image drawn of slaves loaded on the slave ship Brookes; he published this in London in 1791, took the image with him on lectures, and provided it to Wilberforce with other anti-slave trade materials for use in parliament.

This was the beginning of their protracted parliamentary campaign, during which Wilberforce introduced a motion in favour of abolition almost every year. Clarkson, Wilberforce and the other members of the Committee for the Abolition of the Slave Trade and their supporters, were responsible for generating and sustaining a national movement that mobilised public opinion as never before. Parliament, however, refused to pass the bill. The outbreak of War with France effectively prevented further debate for many years.

By 1794, Clarkson’s health was failing, as he suffered from exhaustion. He retired from the campaign and spent some time in the Lake District, where he bought an estate at Ullswater. There he became a friend of the poet William Wordsworth.

In 1796 he married Catherine Buck of Bury St Edmunds, Suffolk; their only child Thomas was born in 1796. They moved back to the south of England for the sake of Catherine’s health, and settled at Bury St Edmunds from 1806 to 1816. Next they lived at Playford Hall, located halfway between Ipswich and Woodbridge, Suffolk.

When the war with France appeared to be almost over, in 1804 Clarkson and his allies revived the anti-slave trade campaign. After his ten years’ retreat, he mounted his horse to travel again all over Great Britain and canvass support for the measure. He appeared to have returned with all his old enthusiasm and vigour. He was especially active in persuading MPs to back the parliamentary campaign.

Passage of the Slave Trade Act in 1807 ended the trade and provided for British naval support to enforce the law. Clarkson directed his efforts toward enforcement and extending the campaign to the rest of Europe, as Spain and France continued a trade in their American colonies. The United States also prohibited the international trade in 1807, and operated chiefly in the Caribbean to interdict illegal slave ships. In 1808 Clarkson published a book about the progress in abolition of the slave trade. He traveled to Paris in 1814 and Aix-la-Chapelle in 1818, trying to reach international agreement on a timetable for abolition of the trade. He contributed the article on the “Slave Trade” for Rees’s Cyclopædia, Vol. 33, 1816.