The Hound of the Baskervilles

The Hound of the Baskervilles – Arthur Conan Doyle

Another, and one of the best known adventures of Sherlock Holmes, lets him dive into an old English west country legend. One of the squires of Baskerville in a drunken frolic, it is said, sold himself, for a consideration, to the evil one. Forever afterwards, an immense and hideous hound at times haunted the moors at night … 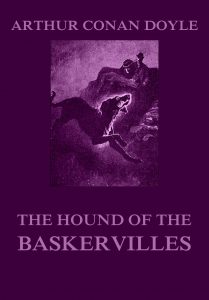 The Hound of the Baskervilles

The Hound of the Baskervilles.

Dr James Mortimer asks Sherlock Holmes to investigate the death of his friend, Sir Charles Baskerville. Sir Charles was found dead on the grounds of his Devonshire estate, Baskerville Hall, and Mortimer now fears for Sir Charles’s nephew and sole heir, Sir Henry Baskerville, who is the new master of Baskerville Hall. The death was attributed to a heart attack, but Mortimer is suspicious, because Sir Charles died with an expression of horror on his face, and Mortimer noticed “the footprints of a gigantic hound” nearby. The Baskerville family has supposedly been under a curse since the era of the English Civil War when ancestor Hugo Baskerville allegedly offered his soul to the devil for help in abducting a woman and was reportedly killed by a giant spectral hound. Sir Charles believed in the curse and was apparently fleeing from something in fright when he died.

Intrigued, Holmes meets with Sir Henry, newly arrived from Canada. Sir Henry has received an anonymous note, cut and pasted from newsprint, warning him away from the Baskerville moors, and one of his new boots is inexplicably missing from his London hotel room. The Baskerville family is discussed: Sir Charles was the eldest of three brothers; the youngest, black sheep Rodger, is believed to have died childless in South America, while Sir Henry is the only child of the middle brother. Sir Henry plans to move into Baskerville Hall, despite the ominous warning message. Holmes and Dr Watson follow him from Holmes’s Baker Street apartment back to his hotel and notice a bearded man following him in a cab; they pursue the man, but he escapes. Mortimer tells them that Mr Barrymore, the butler at Baskerville Hall, has a beard like the one on the stranger. Sir Henry’s boot reappears, but an older one vanishes.

Holmes sends for the cab driver who shuttled the bearded man after Sir Henry and is both astounded and amused to learn that the stranger had made a point of giving his name as ‘Sherlock Holmes’ to the cabbie. Holmes, now even more interested in the Baskerville affair but held up with other cases, dispatches Watson to accompany Sir Henry to Baskerville Hall with instructions to send him frequent reports about the house, grounds, and neighbours. Upon arrival at the grand but austere Baskerville estate, Watson and Sir Henry learn that an escaped murderer named Selden is believed to be in the area.

Barrymore and his wife, who also works at Baskerville Hall, wish to leave the estate soon. Watson hears a woman crying in the night; it is obvious to him that it was Mrs Barrymore, but her husband denies it. Watson has no proof that Barrymore was in Devon on the day of the chase in London. He meets a brother and sister who live nearby: Mr Stapleton, a naturalist, and the beautiful Miss Stapleton. When an animalistic sound is heard, Stapleton is quick to dismiss it as unrelated to the legendary hound. When her brother is out of earshot, Mrs Stapleton mistakes Watson for Sir Henry and warns him to leave. She and Sir Henry later meet and quickly fall in love, arousing Stapleton’s anger; he later apologises and invites Sir Henry to dine with him a few days later.

Barrymore arouses further suspicion when Watson and Sir Henry catch him at night with a candle in an empty room. Barrymore refuses to answer their questions, but Mrs. Barrymore confesses that Selden is her brother, and her husband is signalling that they have left supplies for him. Watson and Sir Henry pursue Selden on the moor, but he eludes them, while Watson notices another man on a nearby tor. After an agreement is reached to allow Selden to flee the country, Barrymore reveals the contents of an incompletely burnt letter asking Sir Charles to be at the gate at the time of his death. It was signed with the initials L.L.; on Mortimer’s advice, Watson questions a Laura Lyons, who admits to writing the letter in hopes that Sir Charles would help finance her divorce, but says she did not keep the appointment. Watson tracks the second man he saw in the area and discovers it to be Holmes, investigating independently in hopes of a faster resolution. Holmes reveals further information: Stapleton is actually married to the supposed Miss Stapleton, and he promised marriage to Laura Lyons to get her cooperation.

They hear a scream and discover the body of Selden, dead from a fall. They initially mistake him for Sir Henry, whose old clothes he was wearing.

At Baskerville Hall, Holmes notices a resemblance between Stapleton and a portrait of Hugo Baskerville. He realises that Stapleton could be an unknown Baskerville family member, seeking to claim the Baskerville wealth by eliminating his relatives. Accompanied by Inspector Lestrade, whom Holmes has summoned, Holmes and Watson travel to the Stapleton home, where Sir Henry is dining. They rescue him from a hound that Stapleton releases while Sir Henry is walking home across the moor. Shooting the animal dead in the struggle, Sherlock reveals that it was a perfectly mortal dog – a mix of bloodhound and mastiff, painted with phosphorus to give it a hellish appearance. They find Miss Stapleton bound and gagged inside the house, while Stapleton apparently dies in an attempt to reach his hideout in a nearby mine. They also find Sir Henry’s boot, which was used to give the hound Sir Henry’s scent.

Weeks later, Holmes provides Watson with additional details about the case. Stapleton was, in fact, Rodger Baskerville’s son, also named Rodger. His now-widow is a South American woman, the former Beryl Garcia. He supported himself through crime for many years, before learning that he could inherit a fortune by murdering his uncle and cousin. Stapleton had taken Sir Henry’s old boot because the new, unworn boot lacked his scent. The hound had pursued Selden to his death because of the scent on Sir Henry’s old clothes. Mrs Stapleton had disavowed her husband’s plot, so he had imprisoned her to prevent her from interfering.