The Law of the Offerings

The Law of the Offerings – Andrew Jukes

Mr. Jukes’ books throw more light upon the teaching of Scripture, with regard to the mysterious subjects of which they treat, than any with which we are acquainted. His strain of writing is eminently devout and edifying, especially in the views which he advocates of particular rites and usages. The notion of the pre-millennial reign of Christ vitiates, in our judgment, many of the most pious and devout passages which abound in this volume. 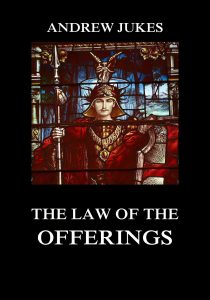 The Law of the Offerings

The Law of the Offerings.

Biography of Andrew Jukes (from wikipedia.com)

The son of Andrew Jukes and his wife Georgina Ewart, he was educated at Harrow School and Trinity College, Cambridge. He was initially a curate in the Church of England at St. John’s Church, Hull, but became convinced of Baptist teaching and underwent adult baptism at the George Street Chapel, Hull, on August 31, 1843. After leaving the Church of England, he joined the Plymouth Brethren.

Jukes later left the Plymouth Brethren and founded an independent chapel in Hull. Among those influenced by Jukes was Hudson Taylor.