Apart from his many novels, William Dean Howells was a prolific author of plays, especially farces. This volume includes the following of his works: The Parlor-Car, The Sleeping Car, The Register, The Elevator, The Garotters, Five O’clock Tea, A Likely Story, The Albany Depot, A Letter Of Introduction, The Unexpected Guests, Evening Dress, Bride Roses. 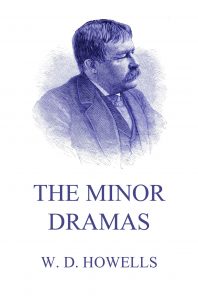 Scene: A Parlor-Car on the New York Central Railroad. It is late afternoon in the early autumn, with a cloudy sunset threatening rain. The car is unoccupied save by a gentleman, who sits fronting one of the windows, with his feet in another chair; a newspaper lies across his lap; his hat is drawn down over his eyes, and he is apparently asleep. The rear door of the car opens, and the conductor enters with a young lady, heavily veiled, the porter coming after with her wraps and travelling-bags. The lady’s air is of mingled anxiety and desperation, with a certain fierceness of movement. She casts a careless glance over the empty chairs.

Conductor: “Here’s your ticket, madam. You can have any of the places you like here, or,”—glancing at the unconscious gentleman, and then at the young lady,—“if you prefer, you can go and take that seat in the forward car.”

Miss Lucy Galbraith: “Oh, I can’t ride backwards. I’ll stay here, please. Thank you.” The porter places her things in a chair by a window, across the car from the sleeping gentleman, and she throws herself wearily into the next seat, wheels round in it, and lifting her veil gazes absently out at the landscape. Her face, which is very pretty, with a low forehead shadowed by thick blond hair, shows the traces of tears. She makes search in her pocket for her handkerchief, which she presses to her eyes. The conductor, lingering a moment, goes out.

Porter: “I’ll be right here, at de end of de cah, if you should happen to want anything, miss,”—making a feint of arranging the shawls and satchels. “Should you like some dese things hung up? Well, dey’ll be jus’ as well in de chair. We’s pretty late dis afternoon; more’n four hours behin’ time. Ought to been into Albany ‘fore dis. Freight train off de track jus’ dis side o’ Rochester, an’ had to wait. Was you going to stop at Schenectady, miss?”

Miss Galbraith, absently: “At Schenectady?” After a pause, “Yes.”

Porter: “Well, that’s de next station, and den de cahs don’t stop ag’in till dey git to Albany. Anything else I can do for you now, miss?”

Miss Galbraith: “No, no, thank you, nothing.” The Porter hesitates, takes off his cap, and scratches his head with a murmur of embarrassment. Miss Galbraith looks up at him inquiringly and then suddenly takes out her porte-monnaie, and fees him.

Porter: “Thank you, miss, thank you. If you want anything at all, miss, I’m right dere at de end of de cah.” He goes out by the narrow passage-way beside the smaller enclosed parlor. Miss Galbraith looks askance at the sleeping gentleman, and then, rising, goes to the large mirror, to pin her veil, which has become loosened from her hat. She gives a little start at sight of the gentleman in the mirror, but arranges her head-gear, and returning to her place looks out of the window again. After a little while she moves about uneasily in her chair, then leans forward, and tries to raise her window; she lifts it partly up, when the catch slips from her fingers, and the window falls shut again with a crash.

Miss Galbraith: “Oh, dear, how provoking! I suppose I must call the porter.” She rises from her seat, but on attempting to move away she finds that the skirt of her polonaise has been caught in the falling window. She pulls at it, and then tries to lift the window again, but the cloth has wedged it in, and she cannot stir it. “Well, I certainly think this is beyond endurance! Porter! Ah,—Porter! Oh, he’ll never hear me in the racket that these wheels are making! I wish they’d stop,—I”—The gentleman stirs in his chair, lifts his head, listens, takes his feet down from the other seat, rises abruptly, and comes to Miss Galbraith’s side.

Mr. Allen Richards: “Will you allow me to open the window for you?” Starting back, “Miss Galbraith!”

Miss Galbraith: “Al— Mr. Richards!” There is a silence for some moments, in which they remain looking at each other; then,—

Miss Galbraith: “I forbid you to address me in that way, Mr. Richards.”

Mr. Richards: “Why, you were just going to call me Allen!”

Miss Galbraith: “That was an accident, you know very well,—an impulse”—

Miss Galbraith: “Of which you ought to be ashamed to take advantage. I wonder at your presumption in speaking to me at all. It’s quite idle, I can assure you. Everything is at an end between us. It seems that I bore with you too long; but I’m thankful that I had the spirit to not at last, and to act in time. And now that chance has thrown us together, I trust that you will not force your conversation upon me. No gentleman would, and I have always given you credit for thinking yourself a gentleman. I request that you will not speak to me.”

Mr. Richards: “You’ve spoken ten words to me for every one of mine to you. But I won’t annoy you. I can’t believe it, Lucy; I can not believe it. It seems like some rascally dream, and if I had had any sleep since it happened, I should think I—”

Miss Galbraith: “Oh! You were sleeping soundly enough when I got into the car!”

Mr. Richards: “I own it; I was perfectly used up, and I had dropped off.”

Miss Galbraith, scornfully: “Then perhaps you have dreamed it.”

Mr. Richards: “I’ll think so till you tell me again that our engagement is broken; that the faithful love of years is to go for nothing; that you dismiss me with cruel insult, without one word of explanation, without a word of intelligible accusation, even. It’s too much! I’ve been thinking it all over and over, and I can’t make head or tail of it. I meant to see you again as soon as we got to town, and implore you to hear me. Come, it’s a mighty serious matter, Lucy. I’m not a man to put on heroics and that; but I believe it’ll play the very deuce with me, Lucy,—that is to say, Miss Galbraith,—I do indeed. It’ll give me a low opinion of woman.”

Miss Galbraith, averting her face: “Oh, a very high opinion of woman you have had!”

Mr. Richards, with sentiment: “Well, there was one woman whom I thought a perfect angel.”

Miss Galbraith: “Indeed! May I ask her name?”

Mr. Richards, with a forlorn smile. “I shall be obliged to describe her somewhat formally as—Miss Galbraith.”

Mr. Richards: “Why, you’ve just forbidden me to say Lucy! You must tell me, dearest, what I have done to offend you. The worst criminals are not condemned unheard, and I’ve always thought you were merciful if not just. And now I only ask you to be just.”

Miss Galbraith, looking out of the window: “You know very well what you’ve done. You can’t expect me to humiliate myself by putting your offence into words.”

Mr. Richards: “Upon my soul, I don’t know what you mean! I don’t know what I’ve done. When you came at me, last night, with my ring and presents and other little traps, you might have knocked me down with the lightest of the lot. I was perfectly dazed; I couldn’t say anything before you were off, and all I could do was to hope that you’d be more like yourself in the morning. And in the morning, when I came round to Mrs. Philips’s, I found you were gone, and I came after you by the next train.”

Miss Galbraith: “Mr. Richards, your personal history for the last twenty-four hours is a matter of perfect indifference to me, as it shall be for the next twenty-four hundred years. I see that you are resolved to annoy me, and since you will not leave the car, I must do so.” She rises haughtily from her seat, but the imprisoned skirt of her polonaise twitches her abruptly back into her chair. She bursts into tears. “Oh, what shall I do?”

Mr. Richards, dryly: “You shall do whatever you like, Miss Galbraith, when I’ve set you free; for I see your dress is caught in the window. When it’s once out, I’ll shut the window, and you can call the porter to raise it.” He leans forward over her chair, and while she shrinks back the length of her tether, he tugs at the window-fastening. “I can’t get at it. Would you be so good as to stand up,—all you can?” Miss Galbraith stands up, droopingly, and Mr. Richards makes a movement towards her, and then falls back. “No, that won’t do. Please sit down again.” He goes round her chair and tries to get at the window from that side. “I can’t get any purchase on it. Why don’t you cut out that piece?” Miss Galbraith stares at him in dumb amazement. “Well, I don’t see what we’re to do: I’ll go and get the porter.” He goes to the end of the car, and returns. “I can’t find the porter,—he must be in one of the other cars. But”—brightening with the fortunate conception—“I’ve just thought of something. Will it unbutton?”

Mr. Richards: “Yes; this garment of yours.”

Mr. Richards: “Well, then, it’s a very simple matter. If you will just take it off I can easily”—

Miss Galbraith, faintly: “I can’t. A polonaise isn’t like an overcoat”—

Miss Galbraith, with polite ceremony: “The porter will be back soon. Don’t trouble yourself any further about it, please. I shall do very well.”

Mr. Richards, without heeding her: “If you could kneel on that foot-cushion, and face the window”—

Mr. Richards: “Yes, and now”—kneeling beside her—“if you’ll allow me to—to get at the window-catch,”—he stretches both arms forward; she shrinks from his right into his left, and then back again,—“and pull while I raise the window”—

Miss Galbraith: “Yes, yes; but do hurry, please. If any one saw us, I don’t know what they would think. It’s perfectly ridiculous!”—pulling. “It’s caught in the corner of the window, between the frame and the sash, and it won’t come! Is my hair troubling you? Is it in your eyes?”

Mr. Richards: “It’s in my eyes, but it isn’t troubling me. Am I inconveniencing you?”