The Natural Law of Money

This textbook is successful where Jevons falls. The author illustrates the evolution of money and credit by reference to the monetary history of this country, the salient features of which he points out. . . . The prevailing idea of the author is his opposition to any legal-tender law. He pleads for free as opposed to mandatory money. In applying this to our own condition, he presents in strong colors the arguments for a bank-note currency as against a government paper currency. . . . The broad standpoint the author occupies in discussing the currency problems, and the emphasis he places on credit and its extension, that is. on the close connection between the money and the banking problem, gives the book a peculiar value. Everything is centred about the distinction between an artificial and a natural monetary system. 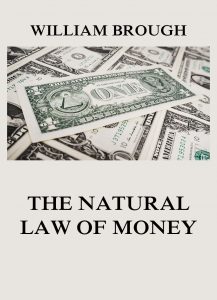 The Natural Law of Money

The Natural Law of Money.

A Definition of Money (from Wikipedia):

Money is any item or verifiable record that is generally accepted as payment for goods and services and repayment of debts in a particular country or socio-economic context. The main functions of money are distinguished as: a medium of exchange; a unit of account; a store of value; and, sometimes, a standard of deferred payment. Any item or verifiable record that fulfills these functions can be considered as money.

Money is historically an emergent market phenomenon establishing a commodity money, but nearly all contemporary money systems are based on fiat money. Fiat money, like any check or note of debt, is without use value as a physical commodity. It derives its value by being declared by a government to be legal tender; that is, it must be accepted as a form of payment within the boundaries of the country, for “all debts, public and private”.

The money supply of a country consists of currency (banknotes and coins) and, depending on the particular definition used, one or more types of bank money (the balances held in checking accounts, savings accounts, and other types of bank accounts). Bank money, which consists only of records (mostly computerized in modern banking), forms by far the largest part of broad money in developed countries.