‘The Ostler” was originally published in 1855 as a short story, which later became the foundation for the much longer story ‘The Dream Woman.’ It is one of Wilkie Collins’ first supernatural stories, revolving around the forty-year-old Isaac Scatchard, who has a very strange dream of a young woman – or wasn’t it a dream, but a ghost? Seven years later he even gets more lost when he encounters a woman who looks very much like his strange dream creature …. 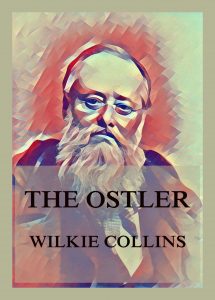 “I have looked—there is no bell.”

“And nobody in the yard. How very extraordinary! Call again, dear.”

My second call echoes through empty space, and rouses nobody—produces, in short, no visible result. I am at the end of my resources—I don’t know what to say or what to do next. Here I stand in the solitary inn yard of a strange town, with two horses to hold, and a lady to take care of. By way of adding to my responsibilities, it so happens that one of the horses is dead lame, and that the lady is my wife.

There is plenty of time to answer the question. Nothing happens; and nobody appears to receive us. Let me introduce myself and my wife.

My wife is a French lady. She was Mademoiselle Clotilde Delorge—when I was first presented to her at her father’s house in France. I fell in love with her—I really don’t know why. It might have been because I was perfectly idle, and had nothing else to do at the time. Or it might have been because all my friends said she was the very last woman whom I ought to think of marrying. On the surface, I must own, there is nothing in common between Mrs. Fairbank and me. She is tall; she is dark; she is nervous, excitable, romantic; in all her opinions she proceeds to extremes. What could such a woman see in me? what could I see in her? I know no more than you do. In some mysterious manner we exactly suit each other. We have been man and wife for ten years, and our only regret is, that we have no children. I don’t know what you may think; I call that—upon the whole—a happy marriage.

So much for ourselves. The next question is—what has brought us into the inn yard? and why am I obliged to turn groom, and hold the horses?

We live for the most part in France—at the country house in which my wife and I first met. Occasionally, by way of variety, we pay visits to my friends in England. We are paying one of those visits now. Our host is an old college friend of mine, possessed of a fine estate in Somersetshire; and we have arrived at his house—called Farleigh Hall—toward the close of the hunting season.

On the day of which I am now writing—destined to be a memorable day in our calendar—the hounds meet at Farleigh Hall. Mrs. Fairbank and I are mounted on two of the best horses in my friend’s stables. We are quite unworthy of that distinction; for we know nothing and care nothing about hunting. On the other hand, we delight in riding, and we enjoy the breezy Spring morning and the fair and fertile English landscape surrounding us on every side. While the hunt prospers, we follow the hunt. But when a check occurs—when time passes and patience is sorely tried; when the bewildered dogs run hither and thither, and strong language falls from the lips of exasperated sportsmen—we fail to take any further interest in the proceedings. We turn our horses’ heads in the direction of a grassy lane, delightfully shaded by trees. We trot merrily along the lane, and find ourselves on an open common. We gallop across the common, and follow the windings of a second lane. We cross a brook, we pass through a village, we emerge into pastoral solitude among the hills. The horses toss their heads, and neigh to each other, and enjoy it as much as we do. The hunt is forgotten. We are as happy as a couple of children; we are actually singing a French song—when in one moment our merriment comes to an end. My wife’s horse sets one of his forefeet on a loose stone, and stumbles. His rider’s ready hand saves him from falling. But, at the first attempt he makes to go on, the sad truth shows itself—a tendon is strained; the horse is lame.

What is to be done? We are strangers in a lonely part of the country. Look where we may, we see no signs of a human habitation. There is nothing for it but to take the bridle road up the hill, and try what we can discover on the other side. I transfer the saddles, and mount my wife on my own horse. He is not used to carry a lady; he misses the familiar pressure of a man’s legs on either side of him; he fidgets, and starts, and kicks up the dust. I follow on foot, at a respectful distance from his heels, leading the lame horse. Is there a more miserable object on the face of creation than a lame horse? I have seen lame men and lame dogs who were cheerful creatures; but I never yet saw a lame horse who didn’t look heartbroken over his own misfortune.

For half an hour my wife capers and curvets sideways along the bridle road. I trudge on behind her; and the heartbroken horse halts behind me. Hard by the top of the hill, our melancholy procession passes a Somersetshire peasant at work in a field. I summon the man to approach us; and the man looks at me stolidly, from the middle of the field, without stirring a step. I ask at the top of my voice how far it is to Farleigh Hall. The Somersetshire peasant answers at the top of his voice:

Mrs. Fairbank doesn’t view the study of agricultural human nature with my relish. Her fidgety horse will not allow her a moment’s repose; she is beginning to lose her temper.

“We can’t go fourteen miles in this way,” she says. “Where is the nearest inn? Ask that brute in the field!”

I take a shilling from my pocket and hold it up in the sun. The shilling exercises magnetic virtues. The shilling draws the peasant slowly toward me from the middle of the field. I inform him that we want to put up the horses and to hire a carriage to take us back to Farleigh Hall. Where can we do that? The peasant answers (with his eye on the shilling):

“Is it far to Underbridge?”

The peasant repeats, “Var to Oonderbridge?”—and laughs at the question. “Hoo-hoo-hoo!” (Underbridge is evidently close by—if we could only find it.) “Will you show us the way, my man?” “Will you gi’ oi a drap of zyder?” I courteously bend my head, and point to the shilling. The agricultural intelligence exerts itself. The peasant joins our melancholy procession. My wife is a fine woman, but he never once looks at my wife—and, more extraordinary still, he never even looks at the horses. His eyes are with his mind—and his mind is on the shilling.

We reach the top of the hill—and, behold on the other side, nestling in a valley, the shrine of our pilgrimage, the town of Underbridge! Here our guide claims his shilling, and leaves us to find out the inn for ourselves. I am constitutionally a polite man. I say “Good morning” at parting. The guide looks at me with the shilling between his teeth to make sure that it is a good one. “Marnin!” he says savagely—and turns his back on us, as if we had offended him. A curious product, this, of the growth of civilization. If I didn’t see a church spire at Underbridge, I might suppose that we had lost ourselves on a savage island.

Arriving at the town, we had no difficulty in finding the inn. The town is composed of one desolate street; and midway in that street stands the inn—an ancient stone building sadly out of repair. The painting on the sign-board is obliterated. The shutters over the long range of front windows are all closed. A cock and his hens are the only living creatures at the door. Plainly, this is one of the old inns of the stage-coach period, ruined by the railway. We pass through the open arched doorway, and find no one to welcome us. We advance into the stable yard behind; I assist my wife to dismount—and there we are in the position already disclosed to view at the opening of this narrative. No bell to ring. No human creature to answer when I call. I stand helpless, with the bridles of the horses in my hand. Mrs. Fairbank saunters gracefully down the length of the yard and does—what all women do, when they find themselves in a strange place. She opens every door as she passes it, and peeps in. On my side, I have just recovered my breath, I am on the point of shouting for the hostler for the third and last time, when I hear Mrs. Fairbank suddenly call to me:

Her voice is eager and agitated. She has opened a last door at the end of the yard, and has started back from some sight which has suddenly met her view. I hitch the horses’ bridles on a rusty nail in the wall near me, and join my wife. She has turned pale, and catches me nervously by the arm.

I look—and what do I see? I see a dingy little stable, containing two stalls. In one stall a horse is munching his corn. In the other a man is lying asleep on the litter.

A worn, withered, woebegone man in a hostler’s dress. His hollow wrinkled cheeks, his scanty grizzled hair, his dry yellow skin, tell their own tale of past sorrow or suffering. There is an ominous frown on his eyebrows—there is a painful nervous contraction on the side of his mouth. I hear him breathing convulsively when I first look in; he shudders and sighs in his sleep. It is not a pleasant sight to see, and I turn round instinctively to the bright sunlight in the yard. My wife turns me back again in the direction of the stable door.

“He was talking in his sleep, Percy, when I first looked in. He was dreaming some dreadful dream. Hush! he’s beginning again.”

I look and listen. The man stirs on his miserable bed. The man speaks in a quick, fierce whisper through his clinched teeth. “Wake up! Wake up, there! Murder!”

There is an interval of silence. He moves one lean arm slowly until it rests over his throat; he shudders, and turns on his straw; he raises his arm from his throat, and feebly stretches it out; his hand clutches at the straw on the side toward which he has turned; he seems to fancy that he is grasping at the edge of something. I see his lips begin to move again; I step softly into the stable; my wife follows me, with her hand fast clasped in mine. We both bend over him. He is talking once more in his sleep—strange talk, mad talk, this time.

“Light gray eyes” (we hear him say), “and a droop in the left eyelid—flaxen hair, with a gold-yellow streak in it—all right, mother! afair, white arms with a down on them—little, lady’s hand, with a reddish look round the fingernails—the knife—the cursed knife—first on one side, then on the other—aha, you she-devil! where is the knife?”