“The Sacred Writings Of …” provides you with the essential works among the Christian writings. The volumes cover the beginning of Christianity until medieval times. This is volume one out of two and containing the following writings: The Apology, On Idolatry, De Spectaculis, De Corona, Ad Nationes, The Soul’s Testimony, A Treatise on the Soul, The Five Books Against Marcion and many more. 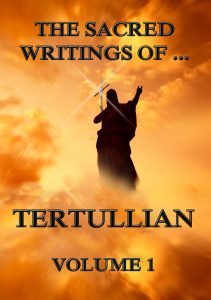 The Sacred Writings of Tertullian, Volume 1.

Short biography of Tertullian (from wikipedia)

Though conservative in his worldview, Tertullian originated new theological concepts and advanced the development of early Church doctrine. He is perhaps most famous for being the first writer in Latin known to use the term trinity (Latin: trinitas). According to The Stanford Encyclopedia of Philosophy, “Tertullian’s trinity [is] not a triune God, but rather a triad or group of three, with God as the founding member”. A similar word had been used earlier in Greek, though Tertullian gives the oldest extant use of the terminology as later incorporated into the Nicene Creed at the 2nd Ecumenical Council, the First Council of Constantinople in 381 AD, or as the Athanasian Creed, or both. Other Latin formulations that first appear in his work are “three persons, one substance” as the Latin “tres personae, una substantia”, (‘ consubstantial ‘, in English), itself from the Koine Greek “treis hypostases, homoousios”). Influenced by Stoic philosophy, the “substance” of Tertullian, however, was a material substance that did not refer to a single God, but to the sharing of a portion of the substance of the Father (the only being who was fully God) with the Son and, through the Son, with the Holy Spirit. He wrote his understanding of the three members of the trinity after becoming a Montanist.

Unlike many Church fathers, he was never recognized as a saint by the Eastern or Western catholic tradition churches, as several of his teachings on issues such as the clear subordination of the Son and Spirit to the Father, and his condemnation of remarriage for widows and of fleeing from persecution, contradicted the doctrines of these traditions.