The Science of Getting Rich, Great And Well

The Science of Getting Rich, Great And Well – Wallace D. Wattles

The purpose of the lessons in this book is to raise the mental and spiritual vibrations of the student – to inspire hope, faith, courage – to awaken larger thought within the mind, inspire greater plans and purposes and awaken the dormant energy in the life to fire the enthusiasm and call into active service hidden talent which the student, possibly, does not dream at his present stage of unfoldment, he possesses. In short our purpose is to awaken men from mental slumber, show the unlimited resources in human nature, the unseen yet open doors to mental wealth first, then as a natural sequence to wealth in material conditions, and thus enlarge and ennoble the life as well as add to its material expressions. This edition includes all three of Wattles’ masterworks: The Science of Getting Rich, The Science of Being Great and The Science of Being Well. 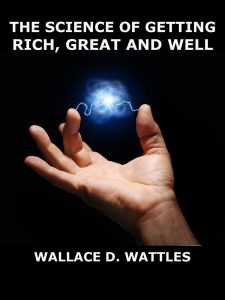 The Science of Getting Rich, Great And Well

The Science of Getting Rich, Great And Well.

Wattles and New Thought (from wikipedia)

As a Midwesterner, Wattles traveled to Chicago, where several leading New Thought leaders were located, among them Emma Curtis Hopkins and William Walker Atkinson, and he gave “Sunday night lectures” in Indiana; however, his primary publisher was Massachusetts-based Elizabeth Towne.

He studied the writings of Georg Wilhelm Friedrich Hegel and Ralph Waldo Emerson and recommended the study of their books to his readers who wished to understand what he characterized as “the monistic theory of the cosmos.”

Through his personal study and experimentation Wattles claimed to have discovered the truth of New Thought principles and put them into practice in his own life. He also advocated the then-popular health theories of “The Great Masticator” Horace Fletcher as well as the “No-Breakfast Plan” of Edward Hooker Dewey, which he claimed to have applied to his own life. He wrote books outlining these principles and practices, giving them titles that described their content, such as Health Through New Thought and Fasting and The Science of Being Great. His daughter Florence recalled that “he lived every page” of his books.

A practical author, Wattles encouraged his readers to test his theories on themselves rather than take his word as an authority, and he claimed to have tested his methods on himself and others before publishing them.

Wattles practiced the technique of creative visualization. In his daughter Florence’s words, he “formed a mental picture” or visual image, and then “worked toward the realization of this vision”

He wrote almost constantly. It was then that he formed his mental picture. He saw himself as a successful writer, a personality of power, an advancing man, and he began to work toward the realization of this vision. He lived every page. His life was truly the powerful life.