The Secret Doctrine of the Rosicrucians

The Secret Doctrine of the Rosicrucians – William Walker Atkinson

The student of the history of occultism and the esoteric teachings, and even the average reader of current books and magazines, finds many references to “The Rosicrucians,” a supposed ancient secret society devoted to the study of occult doctrines and the manifestation of occult powers. But when such person seeks to obtain detailed information concerning this supposed ancient “order” he finds himself baffled and defeated. Before acknowledging the futility of the quest, however, he usually investigates one or more so-called “orders” having as a part of their title the word “Rosicrucian,” only to find himself invited to join such “order” upon the payment of a fee or fees ranging from a small amount in some cases to quite large amounts in others, each “order” claiming to be the “only original order,” and asserting that all the others are base imitators. This book will give you all the insights on this secret order. 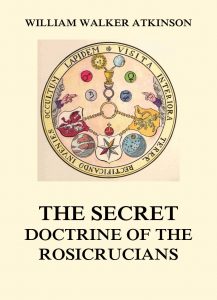 The Secret Doctrine of the Rosicrucians

The Secret Doctrine of the Rosicrucians.

What is Rosicrucianism? (from wikipedia.com)

Rosicrucianism was a cultural movement which arose in Europe in the early 17th century after the publication of several texts which purported to announce the existence of a hitherto unknown esoteric order to the world and made seeking its knowledge attractive to many. The mysterious doctrine of the order is allegedly “built on esoteric truths of the ancient past”, which “concealed from the average man, provide insight into nature, the physical universe and the spiritual realm.” The manifestos do not elaborate extensively on the matter, but clearly combine references to Kabbalah, Hermeticism, and mystical Christianity.

The Rosicrucian Manifestos heralded a “universal reformation of mankind”, through a science allegedly kept secret for decades until the intellectual climate might receive it. Controversies have arisen on whether they were a hoax, whether the “order of the Rosy Cross” existed as described in the manifestos, or whether the whole thing was a metaphor disguising a movement that really existed, but in a different form. In 1616, Johann Valentin Andreae famously designated it as a “ludibrium”.

By promising a spiritual transformation at a time of great turmoil, the manifestos tempted many figures to seek esoteric knowledge. Seventeenth-century occult philosophers such as Michael Maier, Robert Fludd, and Thomas Vaughan interested themselves in the Rosicrucian world view. According to historian David Stevenson, it was influential to Freemasonry as it was emerging in Scotland. In later centuries, many esoteric societies have claimed to derive from the original Rosicrucians. Rosicrucianism is symbolized by the Rosy Cross or Rose Cross.