The Son Of Royal Langbrith

Mr. Howells is at his best in this novel. There is in it the same perfection of finish, the same absolute sureness of technique, the same realism (to use an overworked word, but here used in its true sense, not meaning either nastiness or stupidity) which one is always sure to find in his work. But there is something more in this book than in some of his others – more strength, more interest, and a bigger, and successful, attempt to show the more emotional and more vital side of life. The plot is almost precisely that of Ibsen’s “Ghosts,” with the very great difference, however, that the young man turns out well, and the book ends happily, instead of in the sickening horror of the Ibsen play. Langbrith senior, dead before the story opens, had been a vicious and criminal man in all respects; his widow had allowed their son to come to manhood as a hero-worshipper of his father, knowing that it was wrong, but never having the courage to tell him the true state of affairs. The son is in love with, and is loved by, the daughter of the man whom his father has most wronged. In a quarrel with his uncle the young man is told what his father really was. This terrible blow overturns his whole attitude toward life. He wishes to sacrifice everyone by confession to the world, but is wisely and sanely persuaded that it is best to bear his burden as it is, till the fitting, not Quixotic, time for disclosure arrives. In his trouble, all the characters show their sweetness and strength in helping him to bear the burden. So meagre an outline of the story necessarily means little ; but imagine this plot filled in with every delicacy and sweetness, with fine character-drawing, with real humanity, and with that beautiful and tolerant point of view of life which has come to Mr. Howells in his old age, and you can easily see how fine a novel is ‘The Son of Royal Langbrith’, how well worth reading it is by everyone who cares for the best in fiction. 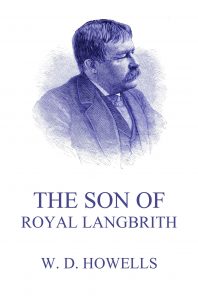 The Son Of Royal Langbrith.

The Son Of Royal Langbrith.

“We’re neither of us young people, I know, and I can very well believe that you had not thought of marrying again. I can account for your surprise at my offer, even your disgust—” Dr. Anther hesitated.

“But I can’t see why it should be ‘terrible,’ as you call it. If you had asked me simply to take ‘ no ’ for an answer, I could have taken it. Or taken it better.’’

He looked at her with a wounded air, and she said, “I didn’t mean ‘terrible’ in that way. I was only thinking of it for myself, or not so much myself as — someone.” She glanced at him, where, tenderly indignant with her, he stood by the window, quite across the room, and she seemed to wish to say more, but let her eyes drop without saying more.

He was silent, too, for a time which he allowed to prolong itself in the apparent expectation that she would break their silence. But he had to speak first. “I don’t like mysteries. I can forget—or ignore—any sense of ‘ terrible ’ you had in mind, if you will tell me one thing. Do you ask me now to take simply ‘no’ for an answer?”

‘‘Oh no!” The words were as if surprised from her, and she made with her catching breath as if she would have caught them back.

He came quickly across the room to her. “ What is it, Amelia?”

“ I can’t tell you,” she shuddered out, and she recoiled, pulling herself up, as if she wished to escape but felt an impenetrable hinderance at her back. In the action, she showed taller than she was, and more girlishly slender. At forty, after her wifehood of three years and her widowhood of nineteen years, the inextinguishable innocence of girlhood, which keeps itself through all the experiences of a good woman’s life, was pathetic in her appealing eyes; and the mourning, subdued to the paler shades of purple, which she permanently wore, would have made a stranger think of an orphan rather than a widow in her presence.

Anther’s burly frame arrested itself at her recoil. His florid face, clean shaven at a time when nearly all men wore beards, was roughed to a sort of community of tint with his brown overcoat by the weather of many winters’ and summers’ driving in his country practice. His iron-gray hair, worn longer than the fashion was in towns, fell down his temples and neck from under his soft hat. He had on his driving gloves, and he had his whip in one hand. He had followed Mrs. Langbrith indoors in that figure from the gate, where his unkempt old horse stood with his mud spattered buggy, to pursue the question which she tried rather than wished to shun, and he did not know that he had not uncovered. At the pathos in her eyes and in her cheeks, which had the vertical hollows showing oftener in youth than in later life, the harshness of gathered will went out of his face. “ I know what you mean,” he said; and at his words the tears began to drip down her face without the movement of any muscle in it, as if a habit of self-control which enabled her to command the inward effects of emotion had not been able to extend itself to its displays. “Poor thing!” he pitied her. “Must you always have a tyrant?”

“Oh yes, he is! I know the type. I dare say he doesn’t hit you, but he terrorizes you.”

Mrs. Langbrith did not speak. In her reticence, even her tears stopped.

“You tempt him to bully you. Lord bless me, you tempt me! But I won’t; no, I won’t. Amelia, why, in Heaven’s name, should he object? He has his own interests, quite apart from yours; his own world, which you couldn’t enter if he would let you. A fellow in his junior year at college is as remote from his mother in everything as if he were in another planet!”

“We write to each other every Sunday,” she urged, diffidently.

“ I have no doubt you try to keep along with him; that’s your nature; but I know that he cowed you before he left home, and I know that he cows you still. I could read your correspondence—the spirit -—without seeing it. He isn’t to blame. You’ve let him walk over you till he thinks there is no other path to manhood. Remember, I don’t say Jim is a bad fellow. He is a very good fellow—considering.”

The doctor went to the window and stooped to look out at his horse, which remained as he had left it, only more patiently sunken in a permanence expressed by the collapsing of its hind quarters into a comfortable droop, and a dreamy dejection of its large head. In the meantime, Mrs. Langbrith had sat down in a chair which she seemed to think had offered itself to her, and when the doctor came back, he asked, “May I sit down?”

In the act of sitting down, he realized that he had his hat on. He took it off and put it on the floor near his feet, where it toppled into a soft heap. His hair had partly lifted with it, and its disorder on his crown somewhat concealed its thinness. “ I want to talk this matter over sensibly. We are not two young things that we need be scared at our own feelings, or each other’s. I suppose I may say we both knew it was coming to something like this?”

She might not have let him say so for her, but in her silence,  he went on to say so for himself.

“I knew it was coming, anyway, and I’ve known it for a good while. I have liked you ever since I came to Saxmills she trembled and colored a little—“but I wouldn’t be saying what I am saying to you, if I had cared for you before Langbrith died as I care for you now. That would be, to my thinking, rather loathsome. I should despise myself for it; I should despise you; I couldn’t help it. But we are both fairly outside of that. I didn’t begin to realize how it was with me till about a year ago, and I don’t suppose that you—’’

Mrs. Langbrith shifted her position slightly, but he did not notice, and he began again.

“ So I feel that I can offer you a clean hand. I’m six years older than you are, which makes it just about right; and I’m not so poor that I need seem to be after your—thirds. I’ve got a good practice, and I don’t intend to take life so hard hereafter. I could give you as pleasant a home—”

“Oh, I couldn’t think of leaving this!” she broke out, helplessly.

Anther allowed himself to smile. “Well, well, there’s no hurry. But if Jim marries—”

“ I’m imagining that you would live with me.”

“I’m merely imagining; I’m not trying to commit you to anything, or to overrule you at all. My idea is, that there’s been enough of that in your life. I want you to overrule me, and if you don’t fancy settling down immediately, and would like a year or two in Europe first, I could freshen my science up in Vienna or Paris, and come back all the better prepared to keep on in my practice here, or I could give up my practice altogether.”

“ No, I oughtn’t. But all this is neither here nor there, till the great point is settled. Do you think anyone could care for me as I care for you?

“Do you care for me—that way—now?” He seemed to expect evasion or hesitation, even such elusion as might have expressed itself in material escape from him, and, unconsciously, he hitched his chair forward as if to hem her in.

It was a needless precaution. She answered instantly, “You know I do.”

“Amelia,” Anther asked solemnly, without changing his posture or the slant of his face in its lift towards hers, “have I put any pressure on you to say this? Do you say it as freely as if I hadn’t asked you?”

The absurdity of the question did not appear to either of them. She answered, “I say it as freely as if it had never been asked. I would have said it years ago. I have always liked you—that way. Or ever since—”

He leaned back in his chair and pushed his hands forward on the arms. “ Then—then—’” he began, bewilderedly, and she said:

“ No, he likes you; he respects you. He says you are a physician who would be famous in a large place. He—”

Anther put the rest aside with his hand. “Then he would object to anyone? Is that it?’’

“Yes,’’ said Mrs. Langbrith, with a drop to specific despair from her general hopelessness.

“ Out of reverence for his father’s memory.”