The Spiritual Exercises of St. Ignatius of Loyola

The Spiritual Exercises of St. Ignatius of Loyola, (composed from 1522-1524) are a set of Christian meditations, prayers and mental exercises, divided into four thematic ‘weeks’ of variable length, designed to be carried out over a period of 28 to 30 days. They were composed with the intention of helping the retreatant to discern Jesus in his life, leading then to a personal commitment to follow him. Though the underlying spiritual outlook is Catholic, the exercises are often made nowadays by non-Catholics. The ‘Spiritual Exercises’ booklet was formally approved in 1548 by Paul III. 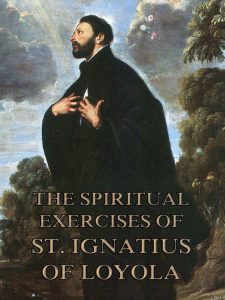 The Spiritual Exercises of St. Ignatius of Loyola

The Spiritual Exercises of St. Ignatius of Loyola.

Background on Ignatius of Loyola (from Wikipedia):

Saint Ignatius of Loyola (Basque: Ignazio Loiolakoa, Spanish: Ignacio de Loyola; c. October 23, 1491 – July 31, 1556) was a Spanish priest and theologian, who founded the religious order called the Society of Jesus (Jesuits) and became its first Superior General. The Jesuit order served the Pope as missionaries, and they were bound by a vow of special obedience to the sovereign pontiff in regard to the missions. They therefore emerged as an important political force during the time of the Counter-Reformation.

Ignatius is remembered as a talented spiritual director. He recorded his method in a celebrated treatise called the Spiritual Exercises, a simple set of meditations, prayers, and other mental exercises, first published in 1548.

Ignatius was beatified in 1609, and then canonized, receiving the title of Saint on March 12, 1622. His feast day is celebrated on July 31. He is the patron saint of the provinces of Gipuzkoa and Biscay as well as the Society of Jesus, and was declared patron saint of all spiritual retreats by Pope Pius XI in 1922. Ignatius is also a foremost patron saint of soldiers.