Mr. Wells’s Wheels of Chance is assuredly one of the best books he has written. It is as delightful a jeu d’esprit as we have seen for many a day. Mr. Wells has a vein of the richest and most delicate humor, which enlivens every page. The hero is an original conception—original, because he comes from so very familiar a type that he is, indeed, the last hero a novelist would ordinarily select. He is a clerk in a dry goods establishment, absolutely commonplace in body, mind, and soul. For this very reason his adventures on his cycling tour in southern England make delightful reading—his deeds, words, and thoughts are so completely within the limits of our common humanity. Every reader who wheels will vote this book a triumph of psychology. The struggles at mounting, the unexpected violence of dismounting, the mastery of the simultaneous use of the handkerchief and continuous progress, the perils that envelop raising one’s hat to a passer, the accurate localization of fatigue sensations—all of these are faithfully presented by the author. A charming Quixotic romance is interwoven with the natural adventures of the tour, and the “shameful episode of the young lady in grey” will remain bright in the reader’s memory long after the book is laid aside. Unqualified praise is simply what The Wheels of Chance deserves; and underneath the sparkle of wit and fancy, one sees easily that Mr. Wells is not only a literary expert but a man of genuinely refined taste and a big heart. 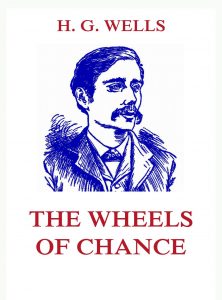 The Wheels Of Chance.

Herbert George “H. G.” Wells (21 September 1866 – 13 August 1946) was an English writer. He was prolific in many genres, including the novel, history, politics, social commentary, and textbooks and rules for war games. Wells is now best remembered for his science fiction novels and is called a “father of science fiction”, along with Jules Verne and Hugo Gernsback. His most notable science fiction works include The Time Machine (1895), The Island of Doctor Moreau (1896), The Invisible Man (1897), and The War of the Worlds (1898). He was nominated for the Nobel Prize in Literature four times.

Wells’s earliest specialised training was in biology, and his thinking on ethical matters took place in a specifically and fundamentally Darwinian context. He was also from an early date an outspoken socialist, often (but not always, as at the beginning of the First World War) sympathising with pacifist views. His later works became increasingly political and didactic, and he wrote little science fiction, while he sometimes indicated on official documents that his profession was that of journalist. Novels like Kipps and The History of Mr Polly, which describe lower-middle-class life, led to the suggestion that he was a worthy successor to Charles Dickens, but Wells described a range of social strata and even attempted, in Tono-Bungay (1909), a diagnosis of English society as a whole. A diabetic, in 1934, Wells co-founded the charity The Diabetic Association (known today as Diabetes UK).