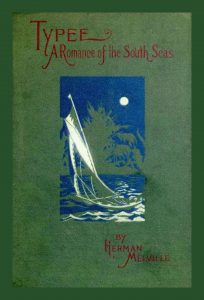 Typee is “in fact, neither literal autobiography nor pure fiction”. Melville “drew his material from his experiences, from his imagination, and from a variety of travel books when the memory of his experiences were inadequate.” He departed from what actually happened in several ways, sometimes by extending factual incidents, sometimes by fabricating them, and sometimes by what one scholar calls “outright lies”.

The actual one-month stay on which Typee is based is presented as four months in the narrative; there is no lake on the actual island on which Melville might have canoed with the lovely Fayaway, and the ridge which Melville describes climbing after escaping the ship he may actually have seen in an engraving. He drew extensively on contemporary accounts by Pacific explorers to add to what might otherwise have been a straightforward story of escape, capture, and re-escape. Most American reviewers accepted the story as authentic, though it provoked disbelief among some British readers.

Two years after the novel’s publication, many of the events described therein were corroborated by Melville’s fellow castaway, Richard Tobias “Toby” Greene.