‘Will’s Wonder Book’ was first published in “Merry’s Museum” from April to November 1868 and was published in book form by Horace B. Fuller in 1870. It’s a collection of dialogues between two children and their grandmother about animals and insects. A fantastic book by the author of all-time-classic ‘Little Women’ with detailed insights and very easy to grasp facts about the world of the animals. 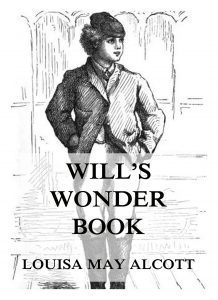 TELL about the ants, grandma. I’ve looked into a beehive, and seen the busy folks at work; but I never saw the inside of an ant’s house,” said Polly, as Will lay down again.

“It is a city, my dear, full of little houses, or cells, streets, bridges, galleries, and gates, built of earth, rushes, grass, and tiny twigs, in the most wonderful manner. There are many roads leading up to the air, and on fine days, the gates stand open; at night, the sentinels shut them, also in rainy weather; and so keep all safe and snug. In the lower rooms, they keep their young when it is cold; but whenever the sun shines, the faithful nurses carry the ant-babies up to the warm, light rooms above, just as our babies are taken out in sunny weather.”

” Yes, really; and many other things do these interesting creatures do very like us. The mother-ant has pretty gauze wings at first, and flies about in the open air very gaily for a time. But when the little ones are born, she pulls off her fine wings, stays at home, and takes care of her family, like a wise and faithful mother. She can’t take all the care, because she often has several thousand children; so, a great many nurses are needed; and Mrs. Ant is more fortunate than we often are in getting good ones. So devoted are the attendants, that they guard the eggs, from the time they are laid till the perfect ant flies away. They put the eggs in heaps in the cells, moving them to warm or cool places, as they think best, and often brood over them in damp weather. When the little grubs are hatched, they feed, wash, and tend them carefully. Not a very easy task, you may see, to take care of four or five thousand babies at once.”

” No; they are good babies, and don’t worry; because their nurses give them simple food, plenty of exercise, and don’t spoil them as we spoil our babies,” answered grandma, shaking her head, for she thought the old ways best.

” What do they eat and do? ” asked Polly, forgetting to read, in her interest in the ant-lings.

” The nurses feed them, at first, with a sweetish fluid from their own bodies, and afterward with various things, putting the food into the little mouths, as birds feed their young. If anyone disturbs the nests, these devoted nurses think only of saving the young, and may be seen running away with the tiny white eggs, or grubs, in their mouths. I read of a faithful nurse who got cut in two during some accident which happened to the nest; and so bent on saving her little charges was she, that the half of the body on which the head remained actually carried ten eggs to a place of safety before it died.”

” Well, that ant was a regular brick! ” cried Will. ” You don’t like slang, grandma; but I must say ‘ brick ‘ this once, for no other word is good enough for that plucky little nurse.”

” I hope Betsy would do as much for us, if our house tumbled down,” began Polly, soberly; but went off into a giggle, at the idea of old Betsy’s head trotting away with the baby.

” Let me tell you one more thing about the nurseries, and then we will go on to the battles and language and games of our friends, ,, said grandma, watching the two attentive faces before her with the kind old eyes that twinkled behind her glasses. ” After a while, the grubs spin themselves into cocoons, and stay there till they are perfect ants. When it is time for them to come out of their yellow cradles, the nurses help unfold the silken covers, as mamma undoes baby from his blankets, and take the young ones up from their long naps. They wash and brush them, spread their wings, lead them through the winding streets, as if teaching them to walk; and when they are strong enough, the nurses follow them to the plants outside, feed them for the last time, kiss, and say good-by. And as the young ones fly away, the faithful creatures linger, as if they found it hard to part from the nurslings they have loved so well.”

” No I ain’t,” returned Polly, winking more than was necessary; for she was rather touched by the tenderness of the little creatures whom she had never known, or cared to know, till now.

” I shan’t walk on ant-hills anymore,” she said, with a small sniff.

Will said nothing, but lay leaning over the busy workers in the grass, thinking of the happy little homes below, and privately determining that he never would disturb his small neighbors again.

” I forgot to tell you,” continued grandma, ” that there were three sorts of ants, — the males, the females, and the neuters. The first two are kings and queens, and live in state; the others are the workers and soldiers. The first have no wings; but the workers have strong legs and feelers, for building, pulling, ‘and running errands. The soldiers have large, sharp jaws for biting, and stings, also; beside little poison-bags, from which they throw a venomous fluid when attacked. Each sort do their parts, and all goes smoothly. The fathers soon die, or fly away; the mothers lay the eggs, and oversee the housekeeping; the workers take care of the babies, build, find food, and wait on the queen; while the soldiers guard the gates, defend the city, and march out to fight the neighboring tribes when wars occur.”

” They are very brave; for these little fellows will attack ants much larger than themselves, and fight gallantly, till they win or die. When they once take hold, they will be torn limb from limb before they let go; and after a battle, the victors may be seen with their enemies’ heads fastened to their feelers, or legs, for they can’t get them off; and, proud as they may be of them, they must be very inconvenient To these brave and bustling mites, a foot of ground is a territory worth fighting for; the body of a beetle, a cargo of straws, or a drop of honey, are possessions of great value. The males and females don’t fight; but the neuters have great battles with their neighbors, and sometimes with each other. Idle ants are driven out of the city, and have their heads cut off before the people, as a warning. But the famous battles are between different communities of the same species. Rival cities, like the Rome and Carthage you read of, Will, send out their armies to settle some dispute; and one may see them meet half-way on a battle-field of two or three feet square. Led by their generals, some seize each other in their powerful jaws; some make prisoners, who are afterward used as slaves in the cities of their enemies; others, joined together by legs or jaws, in long strings, pull and drag in opposite directions, till one side gets stronger than the other, when the chain breaks, and all fight again, two and two. These battles last for days, and at night, each army retires to its own city, only to march out again with fresh courage in the morning. So they keep it up, till one side yields, or a rain quenches the feud, when they go home, and forget all about the quarrel.”

” I’d like to see an ant-battle, if it was a good lively one, and the generals didn’t get the men into scrapes,” said Will, who sometimes read the newspapers.

“I pity the poor ant-slaves, and hope they got away after a while,” added Polly, who had given a dollar to the Freedmen’s Aid Society.

” British and American ants don’t make slaves, the books say, and I am glad of it,” replied grandma. ” One curious thing I must tell you; and that is, that the ants not only have slaves, but cows, or rather another species of insect, from which the ants get a sweet fluid, of which they are very fond. I don’t know whether all ants do this; but Huber tells us that some ants haunt the trees where the aphides go to get sweet sap, and as fast as the little tubes on the bodies of the aphides are full of honey, the ants draw it out, and carry it home for their young, as we do milk.”

” Well, that’s the funniest thing I’ve heard yet Cows, with wings; and ants going a milking, up trees! ” Will lay back in the grass, and shouted; and Polly’s eyes were rounder than ever with -wonders at the discoveries she was making.

” Laugh away, my dear, but it is true; and ants often have their own cows, and guard them, and build walls round them, as we fence in our pastures. Certain beetles are kept by German ants, who have droves of these yellow cattle, and take good care of them,” added grandma.

” It sounds like a fairy story,” said Polly, with a long breath.

” Do the ants talk, and have schools, and do everything else, as we do?”

” Not everything, as we do; but they talk somewhat as the deaf and dumb do, with their feelers or hands. Careful observers say, that when the ants want to warn others, they run and strike sharply against them. If one finds something good to eat, it hurries to the others, and waves its antennae, as if to say , ‘ Come, and taste it’ If the military ants wish to give the order to march, they touch each other on the trunk and forehead. In a fight, if two friends mistake and attack one another, they soon beg pardon by caressing each other. When the queen walks through the city, her people show their joy by tapping her lightly, dancing on their hind-legs before her, and carrying her on their feelers; and when two meet, after being long parted, they seem to shake hands, kiss, and embrace most affectionately.”

” Little dears! ” exclaimed Polly; and down she went, to watch the small people, some of whom had climbed up the tall grass-blades, as if to listen, and be sure that grandma made no mistakes in telling their history.