Your Forces And How To Use Them

Your Forces And How To Use Them – Prentice Mulford

This edition contains all essays that Prentice Mulford published before in six different volumes. That makes more than seventy valuable and extremely useful writings on how results may be obtained in Art, Business, and Health through the force of thought and silent power of mind. 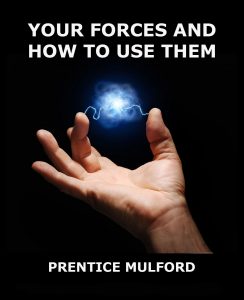 Your Forces And How To Use Them

Your Forces And How To Use Them.

Biography of Prentice Mulford (from Wikipedia):

Prentice Mulford (5 April 1834 – 27 May 1891) was a noted literary humorist and California author. In addition, he helped found the New Thought movement. He also coined the term Law of Attraction.

Mulford was born in Sag Harbor, New York and, in 1856, sailed to California where he would spend the next 16 years. During this time, Mulford spent several years in mining towns, trying to find his fortune in gold, copper, or silver. After leaving the mining life, Mulford ran for a position on the California State Assembly in Sacramento. Although he was nominated, he ultimately lost the election. He returned to San Francisco and began writing for a weekly newspaper, The Golden Era. Mulford spent five years as a writer and editor for various papers and was named by many San Franciscans a “Bohemian,” for his disregard for money. Mulford states in his autobiography, “poverty argued for us possession of more brains” (Prentice Mulford’s Story 130). He became known for his humorous style of writing and vivid descriptions of both mining life as well as life at sea. In 1872, Mulford returned to New York City, where he became known as a comic lecturer, author of poems and essays, and a columnist for [The New York Daily Graphic] from 1875-1881. Mulford was also instrumental in the founding of the popular philosophy, New Thought, along with other notable writers including Ralph Waldo Emerson. Mulford’s book, Thoughts are Things served as a guide to this new belief system and is still popular today.