A Confederate Soldier in Egypt

General Loring was one of many Confederate officers who after the close of the War of the Rebellion offered their services to foreign rulers. A number of these officers took their way to Egypt, and the author of this book was one of the most successful ot them all. He was made Pasha by the Khedive, and he rendered that ruler honorable and efficient service. It was natural that Loring Pasha should have been led to give his Egyptian experiences durable shape, and his book gives a clear and agreeably written account of the country. Such a writer has much more authority than the mere traveler. General Loring lived long in the country, and in intimate relations with persons at the centre of affairs; being withal a man of thought and intelligence he could not, with his opportunities, fail to acquire and retain impressions and facts of interest and value. 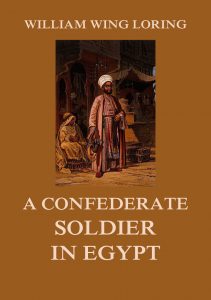 A Confederate Soldier in Egypt

A Confederate Soldier in Egypt.