A Girl fo the Limberlost

The scene is laid in the same country as that of “Freckles”, which appeared a few years before. A number of the characters in “Freckles” are introduced here, and Elnora, the chief character, has the same deep love for the woods that possessed the boy Freckles. She has also become the proud owner of all his books on birds, insects, etc., and has tried to preserve the wonderful room he had made on the edge of the swamp. Elnora is a strong character, and although she has many things to contend with, she accomplishes what she has set out to do—namely, win for herself the education she craved. Through the money she received from the Bird Woman for the specimens she gathered and carried to the city she is able to pay her way through the High School and eventually is able to accept the position of Lecturer on Natural History in the city schools. 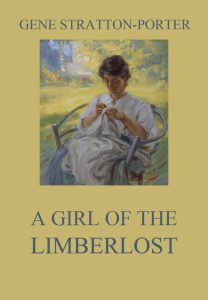 A Girl fo the Limberlost

A Girl fo the Limberlost.