A House to Let

A House to Let – Wilkie Collins (and others)

A Christmas and New Year’s Story. Though totally unlike any of Dickens’ Christmas stories of former years, this is by no means inferior to the best of them. It may not be so highly imaginative as the first of his productions of the kind, but it evinces even greater depth. Cunningly interwoven with the main plot of ‘A House To Let’ are three stories. The story of ‘The Manchester Marriage,’ contains two or three unexaggerated sketches of character. one of them, that of Mr. Openshaw, as new to fiction as it is true to life. To what artist we are indebted for the sketch few readers can fail to discover. It is entirely worthy of her reputation. We have a foil to its pathos in the humors of a showman, whose dwarf went into society with eleven thousand pounds won in a lottery, and came out of society again with as much knowledge of life as that sum purchased. In delicate and simple verse there is a story told-in verse that might be read aloud by cottage firesides, and come home to all hearts in the fireside circle-of a woman’s heart first sacrificing and then sacrificed, but ever pure and true. 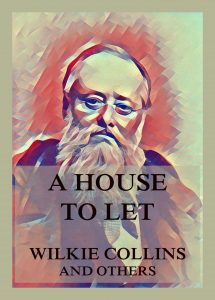 A House to Let.

A House to Let.

I had been living at Tunbridge Wells and nowhere else, going on for ten years, when my medical man—very clever in his profession, and the prettiest player I ever saw in my life of a hand at Long Whist, which was a noble and a princely game before Short was heard of—said to me, one day, as he sat feeling my pulse on the actual sofa which my poor dear sister Jane worked before her spine came on, and laid her on a board for fifteen months at a stretch—the most upright woman that ever lived—said to me, “What we want, ma’am, is a fillip.”

“Good gracious, goodness gracious, Doctor Towers!” says I, quite startled at the man, for he was so christened himself: “don’t talk as if you were alluding to people’s names; but say what you mean.”

“I mean, my dear ma’am, that we want a little change of air and scene.”

“Then Lard forgive you, Doctor Towers,” I said; “why don’t you get into a habit of expressing yourself in a straightforward manner, like a loyal subject of our gracious Queen Victoria, and a member of the Church of England?”

Towers laughed, as he generally does when he has fidgetted me into any of my impatient ways—one of my states, as I call them—and then he began,—

“Tone, ma’am, Tone, is all you require!”  He appealed to Trottle, who just then came in with the coal-scuttle, looking, in his nice black suit, like an amiable man putting on coals from motives of benevolence.

Trottle (whom I always call my right hand) has been in my service two-and-thirty years.  He entered my service, far away from England.  He is the best of creatures, and the most respectable of men; but, opinionated.

“What you want, ma’am,” says Trottle, making up the fire in his quiet and skilful way, “is Tone.”

“Lard forgive you both!” says I, bursting out a-laughing; “I see you are in a conspiracy against me, so I suppose you must do what you like with me, and take me to London for a change.”

For some weeks Towers had hinted at London, and consequently I was prepared for him.  When we had got to this point, we got on so expeditiously, that Trottle was packed off to London next day but one, to find some sort of place for me to lay my troublesome old head in.

Trottle came back to me at the Wells after two days’ absence, with accounts of a charming place that could be taken for six months certain, with liberty to renew on the same terms for another six, and which really did afford every accommodation that I wanted.

“Could you really find no fault at all in the rooms, Trottle?” I asked him.

“Not a single one, ma’am.  They are exactly suitable to you.  There is not a fault in them.  There is but one fault outside of them.”

“They are opposite a House to Let.”

“O!” I said, considering of it.  “But is that such a very great objection?”

“I think it my duty to mention it, ma’am.  It is a dull object to look at.  Otherwise, I was so greatly pleased with the lodging that I should have closed with the terms at once, as I had your authority to do.”

Trottle thinking so highly of the place, in my interest, I wished not to disappoint him.  Consequently I said:

“The empty House may let, perhaps.”

“How long has this unfortunate House been to let, in the name of Fortune?” said I.

The long and the short of this business was, that next day I had a pair of post-horses put to my chariot—for, I never travel by railway: not that I have anything to say against railways, except that they came in when I was too old to take to them; and that they made ducks and drakes of a few turnpike-bonds I had—and so I went up myself, with Trottle in the rumble, to look at the inside of this same lodging, and at the outside of this same House.

As I say, I went and saw for myself.  The lodging was perfect.  That, I was sure it would be; because Trottle is the best judge of comfort I know.  The empty house was an eyesore; and that I was sure it would be too, for the same reason.  However, setting the one thing against the other, the good against the bad, the lodging very soon got the victory over the House.  My lawyer, Mr. Squares, of Crown Office Row; Temple, drew up an agreement; which his young man jabbered over so dreadfully when he read it to me, that I didn’t understand one word of it except my own name; and hardly that, and I signed it, and the other party signed it, and, in three weeks’ time, I moved my old bones, bag and baggage, up to London.

For the first month or so, I arranged to leave Trottle at the Wells.  I made this arrangement, not only because there was a good deal to take care of in the way of my school-children and pensioners, and also of a new stove in the hall to air the house in my absence, which appeared to me calculated to blow up and burst; but, likewise because I suspect Trottle (though the steadiest of men, and a widower between sixty and seventy) to be what I call rather a Philanderer.  I mean, that when any friend comes down to see me and brings a maid, Trottle is always remarkably ready to show that maid the Wells of an evening; and that I have more than once noticed the shadow of his arm, outside the room door nearly opposite my chair, encircling that maid’s waist on the landing, like a table-cloth brush.

Therefore, I thought it just as well, before any London Philandering took place, that I should have a little time to look round me, and to see what girls were in and about the place.  So, nobody stayed with me in my new lodging at first after Trottle had established me there safe and sound, but Peggy Flobbins, my maid; a most affectionate and attached woman, who never was an object of Philandering since I have known her, and is not likely to begin to become so after nine-and-twenty years next March.

It was the fifth of November when I first breakfasted in my new rooms.  The Guys were going about in the brown fog, like magnified monsters of insects in table-beer, and there was a Guy resting on the door-steps of the House to Let.  I put on my glasses, partly to see how the boys were pleased with what I sent them out by Peggy, and partly to make sure that she didn’t approach too near the ridiculous object, which of course was full of sky-rockets, and might go off into bangs at any moment.  In this way it happened that the first time I ever looked at the House to Let, after I became its opposite neighbour, I had my glasses on.  And this might not have happened once in fifty times, for my sight is uncommonly good for my time of life; and I wear glasses as little as I can, for fear of spoiling it.

I knew already that it was a ten-roomed house, very dirty, and much dilapidated; that the area-rails were rusty and peeling away, and that two or three of them were wanting, or half-wanting; that there were broken panes of glass in the windows, and blotches of mud on other panes, which the boys had thrown at them; that there was quite a collection of stones in the area, also proceeding from those Young Mischiefs; that there were games chalked on the pavement before the house, and likenesses of ghosts chalked on the street-door; that the windows were all darkened by rotting old blinds, or shutters, or both; that the bills “To Let,” had curled up, as if the damp air of the place had given them cramps; or had dropped down into corners, as if they were no more.  I had seen all this on my first visit, and I had remarked to Trottle, that the lower part of the black board about terms was split away; that the rest had become illegible, and that the very stone of the door-steps was broken across.  Notwithstanding, I sat at my breakfast table on that Please to Remember the fifth of November morning, staring at the House through my glasses, as if I had never looked at it before.

All at once—in the first-floor window on my right—down in a low corner, at a hole in a blind or a shutter—I found that I was looking at a secret Eye.  The reflection of my fire may have touched it and made it shine; but, I saw it shine and vanish.