The Haunted House – Wilkie Collins (and others) 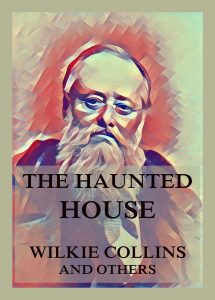 Under none of the accredited ghostly circumstances, and environed by none of the conventional ghostly surroundings, did I first make acquaintance with the house which is the subject of this Christmas piece. I saw it in the daylight, with the sun upon it. There was no wind, no rain, no lightning, no thunder, no awful or unwonted circumstance, of any kind, to heighten its effect. More than that: I had come to it direct from a railway station; it was not more than a mile distant from the railway station; and, as I stood outside the house, looking back upon the way I had come, I could see the goods train running smoothly along the embankment in the valley. I will not say that everything was utterly commonplace, because I doubt if anything can be that, except to utterly commonplace people and there my vanity steps in; but, I will take it on myself to say that anybody might see the house as I saw it, any fine autumn morning.

The manner of my lighting on it was this.

I was travelling towards London out of the North, intending to stop by the way, to look at the house. My health required a temporary residence in the country; and a friend of mine who knew that, and who had happened to drive past the house, had written to me to suggest it as a likely place. I had got into the train at midnight, and had fallen asleep, and had woke up and had sat looking out of window at the brilliant Northern Lights in the sky, and had fallen asleep again, and had woken up again to find the night gone, with the usual discontented conviction on me that I hadn’t been to sleep at all; – upon which question, in the first imbecility of that condition, I am ashamed to believe that I would have done wager by battle with the man who sat opposite me. That opposite man had had, through the night – as that opposite man always has – several legs too many, and all of them too long. In addition to this unreasonable conduct (which was only to be expected of him), he had had a pencil and a pocketbook, and had been perpetually listening and taking notes. It had appeared to me that these aggravating notes related to the jolts and bumps of the carriage, and I should have resigned myself to his taking them, under a general supposition that he was in the civil engineering way of life, if he had not sat staring straight over my head whenever he listened. He was a goggle-eyed gentleman of a perplexed aspect, and his demeanour became unbearable.

It was a cold, dead morning (the sun not being up yet), and when I had out-watched the paling light of the fires of the iron country, and the curtain of heavy smoke that hung at once between me and the stars and between me and the day, I turned to my fellow-traveller and said:

“I beg your pardon, sir, but do you observe anything particular in me?” For, really, he appeared to be taking down, either my travelling cap or my hair, with a minuteness that was a liberty.

The goggle-eyed gentleman withdrew his eyes from behind me, as if the back of the carriage were a hundred miles off, and said, with a lofty look of compassion for my insignificance

“I have nothing to do with you, sir,” returned the gentleman; “pray let me listen – 0.”

He enunciated this vowel after a pause, and noted it down.

At first I was alarmed, for an Express lunatic and no communication with the guard, is a serious position. The thought came to my relief that the gentleman might be what is popularly called a Rapper: one of a sect for (some of) whom I have the highest respect, but whom I don’t believe in. I was going to ask him the question, when he took the bread out of my mouth.

“You will excuse me,” said the gentleman, contemptuously, “if I am too much in advance of common humanity to trouble myself at all about it. I have passed the night – as indeed I pass the whole of my time now – in spiritual intercourse.”

“Oh!” said I, something snappishly.

“The conferences of the night began,” continued the gentleman, turning several leaves of his notebook, “with this message: ‘Evil communications corrupt good manners.’”

“New from spirits,” returned the gentleman.

I could only repeat my rather snappish “Oh!” and ask if I might be favoured with the last communication?

“‘A bird in the hand,’ “ said the gentleman, reading his last entry with great solemnity, “ ‘is worth two in the Bosh.’”

“It came to me, Bosh,” returned the gentleman.

The gentleman then informed me that the spirit of Socrates had delivered this special revelation in the course of the night. “My friend, I hope you are pretty well. There are two in this railway carriage. How do you do? There are seventeen thousand four hundred and seventy-nine spirits here, but you cannot see them. Pythagoras is here. He is not at liberty to mention it, but hopes you like travelling.” Galileo likewise had dropped in, with this scientific intelligence. “I am glad to see you, amico. Coma sta? Water will freeze when it is cold enough. Addio!” In the course of the night, also, the following phenomena had occurred. Bishop Butler had insisted on spelling his name, “Bubler,” for which offence against orthography and good manners he had been dismissed as out of temper. John Milton (suspected of wilful mystification) had repudiated the authorship of Paradise Lost, and had introduced as joint authors of that poem, two Unknown gentlemen, respectively named Grungers and Scadgingtone. And Prince Arthur, nephew of King John of England, had described himself as tolerably comfortable in the seventh circle where, he was learning to paint on velvet, under the direction of Mrs Trimmer and Mary Queen of Scots.

If this should meet the eye of the gentleman who favoured me with these disclosures, I trust he will excuse my confessing that the sight of the rising sun, and the contemplation of the magnificent Order of the vast Universe, made me impatient of them. In a word, I was so impatient of them, that I was mightily glad to get out at the next station, and to exchange these clouds and vapours for the free air of Heaven.

By that time it was a beautiful morning. As I walked away among such leaves as had already fallen from the golden, brown, and russet trees; and as I looked around me on the wonders of Creation, and thought of the steady, unchanging, and harmonious laws by which they are sustained; the gentleman’s spiritual intercourse seemed to me as poor a piece of journey work as ever this world saw. In which heathen state of mind, I came within view of the house, and stopped to examine it attentively.

It was a solitary house, standing in a sadly neglected garden: a pretty even square of some two acres. It was a house of about the time of George the Second; as stiff, as cold, as formal, and in as bad taste, as could possibly be desired by the most loyal admirer of the whole quartette of Georges. It was uninhabited, but had, within a year or two, been cheaply repaired to render it habitable; I say cheaply, because the work had been done in a surface manner, and was already decaying as to the paint and plaster, though the colours were fresh. A lopsided board drooped over the garden wall, announcing that it was “to let on very reasonable terms, well furnished.” It was much too closely and heavily shadowed by trees, and, in particular, there were six tall poplars before the front windows, which were excessively melancholy, and the site of which had been extremely ill chosen.

It was easy to see that it was an avoided house – a house that was shunned by the village, to which my eye was guided by a church spire some half a mile off – a house that nobody would take. And the natural inference was, that it had the reputation of being a haunted house.

No period within the four-and-twenty hours of day and night, is so solemn to me, as the early morning. In the summer time, I often rise very early, and repair to my room to do a day’s work before breakfast, and I am always on those occasions deeply impressed by the stillness and solitude around me. Besides that there is something awful in the being surrounded by familiar faces asleep – in the knowledge that those who are dearest to us and to whom we are dearest, are profoundly unconscious of us, in an impassive state anticipative of that mysterious condition to which we are all tending – the stopped life, the broken threads of yesterday, the deserted seat, the closed book, the unfinished but abandoned occupation, all are images of Death. The tranquillity of the hour is the tranquillity of Death. The colour and the chill have the same association. Even a certain air that familiar household objects take upon them when they first emerge from the shadows of the night into the morning, of being newer, and as they used to be long ago, has its counterpart in the subsidence of the worn face of maturity or age, in death, into the old youthful look. Moreover, I once saw the apparition of my father, at this hour. He was alive and well, and nothing ever came of it, but I saw him in the daylight, sitting with his back towards me, on a seat that stood beside my bed. His head was resting on his hand, and whether he was slumbering or grieving, I could not discern. Amazed to see him there, I sat up, moved my position, leaned out of bed, and watched him. As he did not move, I spoke to him more than once. As he did not move then, I became alarmed and laid my hand upon his shoulder, us I thought – and there was no such thing.

For all these reasons, and for others less easily and briefly statable, I find the early morning to be my most ghostly time. Any house would be more or less haunted, to me, in the early morning; and a haunted house could scarcely address me to greater advantage than then.

I walked on into the village, with the desertion of this house upon my mind, and I found the landlord of the little inn, sanding his doorstep. I bespoke breakfast, and broached the subject of the house.

The landlord looked at me, shook his head, and answered, “I say nothing.”

“Then it is haunted?”

“Well!” cried the landlord, in an outburst of frankness that had the appearance of desperation – “I wouldn’t sleep in it.”

“Is anything seen there?”

The landlord looked at me again, and then, with his former appearance of desperation, called down his stable yard for “Ikey!”

The call produced a high-shouldered young fellow, with a round red face, a short crop of sandy hair, a very broad humorous mouth, a turned up nose, and a great sleeved waistcoat of purple bars with mother-of-pearl buttons, that seemed to be growing upon him, and to be in a fair way – if it were not pruned – of covering his head and overrunning his boots.