The Queen of Hearts

The Queen of Hearts – Wilkie Collins

Mr. Wilkie Collins can tell a story well, and he has an ingenious knack of stringing stories together. After Dark consisted of a series of stories, and admirable they were, and ‘The Queen of Hearts’ is a work of the same description. The author lives in the region of fiction; but he does not aim at the higher objects contemplated by the more gifted writers of his class. He does not affect to be profound, philosophical, or didactic. His great object is so to write as to sustain interest and to amuse. But, though he does not aim at anything beyond that, thanks to his sympathies with many of the better qualities of human nature, he achieves something much higher. 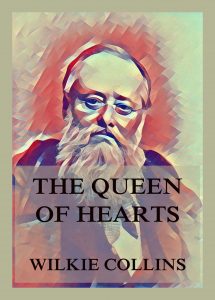 The Queen of Hearts.

The Queen of Hearts.

WE were three quiet, lonely old men, and SHE was a lively, handsome young woman, and we were at our wits’ end what to do with her.

A word about ourselves, first of all—a necessary word, to explain the singular situation of our fair young guest.

We are three brothers; and we live in a barbarous, dismal old house called The Glen Tower. Our place of abode stands in a hilly, lonesome district of South Wales. No such thing as a line of railway runs anywhere near us. No gentleman’s seat is within an easy drive of us. We are at an unspeakably inconvenient distance from a town, and the village to which we send for our letters is three miles off.

My eldest brother, Owen, was brought up to the Church. All the prime of his life was passed in a populous London parish. For more years than I now like to reckon up, he worked unremittingly, in defiance of failing health and adverse fortune, amid the multitudinous misery of the London poor; and he would, in all probability, have sacrificed his life to his duty long before the present time if The Glen Tower had not come into his possession through two unexpected deaths in the elder and richer branch of our family. This opening to him of a place of rest and refuge saved his life. No man ever drew breath who better deserved the gifts of fortune; for no man, I sincerely believe, more tender of others, more diffident of himself, more gentle, more generous, and more simple-hearted than Owen, ever walked this earth.

My second brother, Morgan, started in life as a doctor, and learned all that his profession could teach him at home and abroad. He realized a moderate independence by his practice, beginning in one of our large northern towns and ending as a physician in London; but, although he was well known and appreciated among his brethren, he failed to gain that sort of reputation with the public which elevates a man into the position of a great doctor. The ladies never liked him. In the first place, he was ugly (Morgan will excuse me for mentioning this); in the second place, he was an inveterate smoker, and he smelled of tobacco when he felt languid pulses in elegant bedrooms; in the third place, he was the most formidably outspoken teller of the truth as regarded himself, his profession, and his patients, that ever imperiled the social standing of the science of medicine. For these reasons, and for others which it is not necessary to mention, he never pushed his way, as a doctor, into the front ranks, and he never cared to do so. About a year after Owen came into possession of The Glen Tower, Morgan discovered that he had saved as much money for his old age as a sensible man could want; that he was tired of the active pursuit—or, as he termed it, of the dignified quackery of his profession; and that it was only common charity to give his invalid brother a companion who could physic him for nothing, and so prevent him from getting rid of his money in the worst of all possible ways, by wasting it on doctors’ bills. In a week after Morgan had arrived at these conclusions, he was settled at The Glen Tower; and from that time, opposite as their characters were, my two elder brothers lived together in their lonely retreat, thoroughly understanding, and, in their very different ways, heartily loving one another.

Many years passed before I, the youngest of the three—christened by the unmelodious name of Griffith—found my way, in my turn, to the dreary old house, and the sheltering quiet of the Welsh hills. My career in life had led me away from my brothers; and even now, when we are all united, I have still ties and interests to connect me with the outer world which neither Owen nor Morgan possess.

I was brought up to the Bar. After my first year’s study of the law, I wearied of it, and strayed aside idly into the brighter and more attractive paths of literature. My occasional occupation with my pen was varied by long traveling excursions in all parts of the Continent; year by year my circle of gay friends and acquaintances increased, and I bade fair to sink into the condition of a wandering desultory man, without a fixed purpose in life of any sort, when I was saved by what has saved many another in my situation—an attachment to a good and a sensible woman. By the time I had reached the age of thirty-five, I had done what neither of my brothers had done before me—I had married.

As a single man, my own small independence, aided by what little additions to it I could pick up with my pen, had been sufficient for my wants; but with marriage and its responsibilities came the necessity for serious exertion. I returned to my neglected studies, and grappled resolutely, this time, with the intricate difficulties of the law. I was called to the Bar. My wife’s father aided me with his interest, and I started into practice without difficulty and without delay.

For the next twenty years my married life was a scene of happiness and prosperity, on which I now look back with a grateful tenderness that no words of mine can express. The memory of my wife is busy at my heart while I think of those past times. The forgotten tears rise in my eyes again, and trouble the course of my pen while it traces these simple lines.

Let me pass rapidly over the one unspeakable misery of my life; let me try to remember now, as I tried to remember then, that she lived to see our only child—our son, who was so good to her, who is still so good to me—grow up to manhood; that her head lay on my bosom when she died; and that the last frail movement of her hand in this world was the movement that brought it closer to her boy’s lips.

I bore the blow—with God’s help I bore it, and bear it still. But it struck me away forever from my hold on social life; from the purposes and pursuits, the companions and the pleasures of twenty years, which her presence had sanctioned and made dear to me. If my son George had desired to follow my profession, I should still have struggled against myself, and have kept my place in the world until I had seen h im prosperous and settled. But his choice led him to the army; and before his mother’s death he had obtained his commission, and had entered on his path in life. No other responsibility remained to claim from me the sacrifice of myself; my brothers had made my place ready for me by their fireside; my heart yearned, in its desolation, for the friends and companions of the old boyish days; my good, brave son promised that no year should pass, as long as he was in England, without his coming to cheer me; and so it happened that I, in my turn, withdrew from the world, which had once been a bright and a happy world to me, and retired to end my days, peacefully, contentedly, and gratefully, as my brothers are ending theirs, in the solitude of The Glen Tower.

How many years have passed since we have all three been united it is not necessary to relate. It will be more to the purpose if I briefly record that we have never been separated since the day which first saw us assembled together in our hillside retreat; that we have never yet wearied of the time, of the place, or of ourselves; and that the influence of solitude on our hearts and minds has not altered them for the worse, for it has not embittered us toward our fellow-creatures, and it has not dried up in us the sources from which harmless occupations and innocent pleasures may flow refreshingly to the last over the waste places of human life. Thus much for our own story, and for the circumstances which have withdrawn us from the world for the rest of our days.

And now imagine us three lonely old men, tall and lean, and white-headed; dressed, more from past habit than from present association, in customary suits of solemn black: Brother Owen, yielding, gentle, and affectionate in look, voice, and manner; brother Morgan, with a quaint, surface-sourness of address, and a tone of dry sarcasm in his talk, which single him out, on all occasions, as a character in our little circle; brother Griffith forming the link between his two elder companions, capable, at one time, of sympathizing with the quiet, thoughtful tone of Owen’s conversation, and ready, at another, to exchange brisk severities on life and manners with Morgan—in short, a pliable, double-sided old lawyer, who stands between the clergyman-brother and the physician-brother with an ear ready for each, and with a heart open to both, share and share together.

Imagine the strange old building in which we live to be really what its name implies—a tower standing in a glen; in past times the fortress of a fighting Welsh chieftain; in present times a dreary land-lighthouse, built up in many stories of two rooms each, with a little modern lean-to of cottage form tacked on quaintly to one of its sides; the great hill, on whose lowest slope it stands, rising precipitously behind it; a dark, swift-flowing stream in the valley below; hills on hills all round, and no way of approach but by one of the loneliest and wildest crossroads in all South Wales.

Imagine such a place of abode as this, and such inhabitants of it as ourselves, and them picture the descent among us—as of a goddess dropping from the clouds—of a lively, handsome, fashionable young lady—a bright, gay, butterfly creature, used to flutter away its existence in the broad sunshine of perpetual gayety—a child of the new generation, with all the modern ideas whirling together in her pretty head, and all the modern accomplishments at the tips of her delicate fingers. Imagine such a light-hearted daughter of Eve as this, the spoiled darling of society, the charming spendthrift of Nature’s choicest treasures of beauty and youth, suddenly flashing into the dim life of three weary old men—suddenly dropped into the place, of all others, which is least fit for her—suddenly shut out from the world in the lonely quiet of the loneliest home in England. Realize, if it be possible, all that is most whimsical and most anomalous in such a situation as this, and the startling confession contained in the opening sentence of these pages will no longer excite the faintest emotion of surprise. Who can wonder now, when our bright young goddess really descended on us, that I and my brothers were all three at our wits’ end what to do with her!