A Vindication of the Rights of Men

A Vindication of the Rights of Men – Mary Wollstonecraft

In 1790 came that “extraordinary outburst of passionate intelligence,” Mary Wollstonecraft’s reply to Edmund Burke’s attack on the principles of the French Revolution entitled a “Vindication of the Rights of Men.” In this pamphlet she held up to scorn Burke’s defence of monarch and nobility, his merciless sentimentality. “It is one of the most dashing political polemics in the language,” Mr. Taylor writes enthusiastically, “and has not had the attention it deserves. . . . For sheer virility and grip of her verbal instruments it is probably the finest of her works. Some of her sentences have the quality of a sword-edge, and they flash with the rapidity of a practised duellist. It was written at a white heat of indignation; yet it is altogether typical of the writer that, in the midst of the work, quite suddenly, she had one of her fits of callousness and morbid temper, and declared she would not go on. With great skill Johnson persuaded her to take it up again; and with equal suddenness her eagerness returned, and the book was finished and published before any one else could answer Burke.” 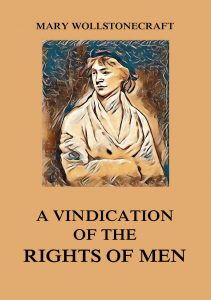 A Vindication of the Rights of Men

A Vindication of the Rights of Men.