Mr. Anthony Hope offers from time to time a welcome relief from the special brand of seriousness that has come to be the hall-mark of the school of British novelists. Not that he fails to take himself seriously; on the contrary, few writers in England show a greater contrast between their earlier and their later work than the author of The Prisoner of Zenda and of the A Young Man’s Year. From the rainbow air-castles of sheer romance to the practical problem of a young man’s first start in the working world is surely a broad enough step to satisfy any demand that present-day fiction shall be serious. But the big difference between the newer school and that which Mr. Hope’s later manner typifies is that his interest remains centred in the individual, in spite of all the new problems, social, ethical, moral or religious, that may have their formative influence; while writers like Galsworthy, Wells, and their followers although able to picture memorable characters when they choose to, are obviously more interested in movements and tendencies and problems than they are in the individual man or woman, and not infrequently give us characters that are really little more than types, standing symbolically for groups rather than for persons. That is why Mr. Hope’s new volume, without being a big achievement, is a welcome diversion. Yet it is simply a careful, minute and at the same time vivid chronicle of just one year in the early life of Arthur Lisle, who when.we first meet him is a specimen of that essentially British creation, a briefless barrister. As yet he has by no means made up his mind whether he will welcome his first brief, if it ever comes. He is diffident and self-distrustful, and the mere thought of rising to address the Court fills him with an anticipatory ague. Meanwhile, time hanging heavily upon him, he seeks to fill it in by various social relaxations, and forms friendships, some more desirable than others. There is, for instance, a certain semi-bohemian set that gathers almost nightly at the home of Marie Sarradet, only daughter of Clement Sarradet, who traces his ancestry to France and his fortune to a perfumer’s shop in Cheapside. With the exception of Arthur Marie’s friends lack, in one way or another, the stamp of true culture and refinement … 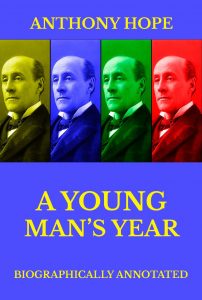