Anne of the Island

“Anne of the Island” is the chronicle of the doings of Anne and her friends during four years spent at Redmond, pleasant adventures of the sort which might happen to any likable young people in a small co-educational college. Anne herself, now a beautiful, clever, and charming young woman, has manyadmirers. Among them is the faithful Gilbert Blythe, her childhood friend who is also a student at Redmond, and eventually Anne discovers that her heart has always been his. In the intervening vacations, the scene shifts from Kingsport, Nova Scotia, the seat of Redmond, back to the Island, Prince Edward Island where the author’s pen and heart are so much at home. Here are the old school friends of former books, the gossipy old ladies, and a pair of twins whose liveliness suggests early Green Gable days. 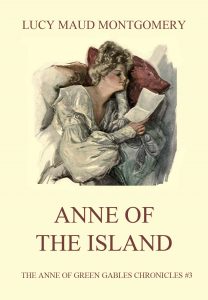 Anne of the Island

Anne of the Island.

Summary of Anne of the Island (from Wikipedia):

Anne leaves Green Gables and her work as a teacher in Avonlea to pursue her original dream (which she gave up in Anne of Green Gables) of taking further education at Redmond College in Nova Scotia. Gilbert Blythe and Charlie Sloane enroll as well, as does Anne’s friend from Queen’s Academy, Priscilla Grant. During her first week of school, Anne befriends Philippa Gordon, a beautiful girl whose frivolous ways charm her. Philippa (Phil for short) also happens to be from Anne’s birthplace in Bolingbroke, Nova Scotia.

The girls spend their first year in boardinghouses and decide to set up house thereafter in a lovely cottage called Patty’s Place, near campus. The girls enter their second year at Redmond happily ensconced at Patty’s Place, along with Queen’s classmate Stella Maynard and her “Aunt Jimsie” (their chaperone), while life continues in Avonlea. Diana Barry becomes engaged to Fred Wright and Davy and Dora continue to keep Marilla busy.

Midway through their college years, Gilbert Blythe, who has always loved Anne, proposes to her but Anne rejects him; although she and Gilbert are very close, she holds sentimental fantasies about true love (all featuring a tall, dark, handsome, inscrutable hero) and does not recognize her true feelings for Gilbert. Gilbert leaves, his heart broken, and the two drift apart.

Anne’s childhood friend Ruby Gillis dies of consumption very soon after finding her own true love. Anne later welcomes the courtship of Roy Gardner, a darkly handsome Redmond student who showers her with attention and poetic gestures. However, when he proposes after two years, Anne abruptly realizes that Roy does not really belong in her life, and that she had only been in love with the idea of him as the embodiment of her childhood ideal.

Anne is so ashamed in how she treated Roy that she feels her entire Redmond experience may have been spoiled. She returns to Green Gables, a “full-fledged B.A.”, but finds herself a bit lonely. Diana gives birth to her first child, and Jane Andrews, an old school friend, marries a Winnipeg millionaire. Having received an offer to be the principal of the Summerside school in the fall, Anne is keeping herself occupied over the summer when she learns that Gilbert is gravely ill with typhoid fever. With shock, Anne finally realizes how deep her true feelings for Gilbert are, and endures a white night of fear that he will leave this world without knowing that she does care. In the morning, Anne gratefully learns that Gilbert will survive. Gilbert recovers over the summer, bolstered by a letter from Phil assuring him that there is really nothing between Anne and Roy. After several visits to Green Gables, Gilbert and Anne take a late summer walk in Hester Gray’s garden, and finally become engaged.