Anne’s House of Dreams is a wholesome, sunny and refreshing story and a close rival to the author’s success “Anne of Green Gables”. The winsome heroine of the earlier tales marries a doctor and goes away to live in an old white house in Four Winds Harbour. The young bride makes some interesting friends among her few and far-between neighbors. There is the sharp-tongued old spinster with a grudge against men and their ways and a helping hand for the weak and needy. Then there is the entertaining old sea captain, keeper of the lighthouse, and the beautiful tragic girl whose history forms one of the most engrossing episodes of the book. It is a kindly tale, permeated with the spirit of common sense and the essence of happiness. 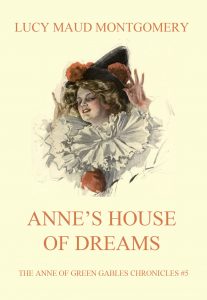 Summary of Anne’s House of Dreams (from Wikipedia):

The book begins with Anne and Gilbert’s wedding, which takes place in the Green Gables orchard. After the wedding, they move to their first home together, which Anne calls their “house of dreams”. Gilbert finds them a small house on the seashore at Four Winds Point, an area near the village of Glen St. Mary, where he is to take over his uncle’s medical practice.

In Four Winds, Anne and Gilbert meet many interesting people, such as Captain Jim, a former sailor who is now the keeper of the lighthouse, and Miss Cornelia Bryant, an unmarried woman in her 40s who lives alone in an emerald-green house and deems the Blythes part of “the race that knows Joseph”. Anne also meets her new neighbor, Leslie Moore, who lost her beloved brother and her father, and then was forced by her mother to marry the mean-spirited and unscrupulous Dick Moore at age 16. She felt free for a year or so after Dick disappeared on a sea voyage, but Captain Jim happened upon him in Cuba and brought him home, amnesiac, brain-damaged and generally helpless, and now dependent on Leslie like a “big baby”. Leslie becomes friends with Anne, but is sometimes bitter towards her because she is so happy and free, when Leslie can never have what Anne does.

Anne’s former guardian Marilla visits her occasionally and still plays an important role in her life. Marilla is present when Anne gives birth to her first child, Joyce, who dies shortly after birth (as Montgomery’s second son did). After the baby’s death, Anne and Leslie become closer as Leslie feels that Anne now understands tragedy and pain—as Leslie puts it, her happiness, although still great, is no longer perfect, so there is less of a gulf between them.

Later in the story, Leslie rents a room in her house to a writer named Owen Ford, who is the grandson of the former owners of Anne’s House of Dreams, the Selywns. Owen, who is looking to write the Great Canadian Novel, finds the inspiration he was looking for in Captain Jim’s shipboard diary, and transforms it into “The Life-Book of Captain Jim”. While Owen is finishing the novel, he and Leslie independently realize they have feelings for each other, but both know they cannot do anything about them. Owen leaves the Island and Leslie is even more miserable being trapped in her marriage to Dick.

Gilbert examines Dick Moore and suspects that if Dick underwent surgery on his skull, he might recover his faculties. Anne and Miss Cornelia are both opposed to the surgery, fearing that Leslie’s life will become infinitely harder if Dick returns to himself, but Gilbert feels obligated to let Leslie know there is a chance for Dick. Leslie consents, and Dick undergoes the surgery in Montreal; when he awakens, he reveals that he is actually Dick’s cousin George, who accompanied Dick to Cuba and was with him when Dick died of yellow fever twelve years before. George resembles Dick strongly because their fathers were brothers and their mothers were sisters, and both had the same peculiar eye coloring abnormality (heterochromia) by which Captain Jim recognized “Dick” in Cuba years before.

Leslie, abruptly set free by this news, returns home, and considers taking a nursing course to get on with her life. Owen Ford returns to the Island to court Leslie after Miss Cornelia informs him of what has happened, and they become engaged. While this is going on, Anne gives birth to her second child, a healthy son. He is named James Matthew, for Anne’s guardian Matthew Cuthbert and for Captain Jim.

At the end of the book, Owen Ford’s book is published, and Captain Jim dies with a smile on his face after reading his advance copy. Miss Cornelia, thought to be a confirmed spinster, announces that she has decided to marry Marshall Elliott, who may be a Grit but at least is a Presbyterian; she says she could have had him at any time but refused to marry him until he shaved his beard off, which he had refused to do for twenty years until the Grits came into power. Finally, Anne, Gilbert, Jem and their new housekeeper, Susan Baker, move to the old Morgan house in the Glen, later to be named Ingleside. Anne is greatly saddened to leave the House of Dreams, but knows that the little house is outgrown and Gilbert’s work as a doctor requires him to live closer to town.

This book introduces Susan Baker, the elderly spinster who is the Blythes’ maid-of-all-work.