A simple, wholesome love story in which the well-loved Anne, of “Anne of Green Gables” fame, appears, now the mother of six irresistible — and irrepressible — children. The story overflows with real humor and pure romance. It solves no problems, there is no hint of hate in it—it is just a simple love story chronicling the everyday events in a community of kindly people whose lives are the counterpart of other lives the country over. 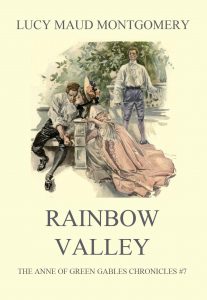 Summary of Rainbow Valley (from Wikipedia):

Anne Shirley has now been married to Gilbert Blythe for 15 years, and the couple have six children: Jem, Walter, Nan, Di, Shirley, and Rilla.

After a trip to London, Anne returns to the news that a new minister has arrived in Glen St. Mary. John Meredith is a widower with four young children: Gerald (Jerry), Faith, Una, and Thomas Carlyle (Carl). The children have not been properly brought up since the death of their mother, with only their father (who is easily absorbed by matters of theology) to parent them. The children are considered wild and mischievous by many of the families in the village (who tend only to hear about the Meredith children when they have gotten into some kind of scrape), causing them to question Mr. Meredith’s parenting skills and his suitability as a minister.

For most of the book, only the Blythes know of the Meredith children’s loyalty and kindness. They rescue an orphaned girl, Mary Vance, from starvation, and Una finds a home for her with Mrs. Marshall Elliott. When the children get into trouble, Faith sometimes tries to explain their behavior to the townsfolk, which generally causes an even bigger scandal.

The Merediths, Blythes, and Mary Vance often play in a hollow called Rainbow Valley, which becomes a gathering place for the children in the book. Jem Blythe tries to help the Merediths behave better by forming the “Good-Conduct Club,” in which the Merediths punish themselves for misdeeds. Their self-imposed punishments lead to Carl becoming very ill with pneumonia after spending hours in a graveyard on a wet night, and to Una fainting in church after fasting all day. When this happens, John Meredith is wracked with guilt over his failings as a father.

Mr. Meredith realizes that he should marry again and give the children a mother, though he has always thought he will never love anyone again as he did his late wife. He is surprised to find that he has fallen in love with Rosemary West, a woman in her late thirties who lives with her sister Ellen, who is ten years older. John proposes marriage to Rosemary, but Ellen forbids Rosemary from accepting, as years earlier they had promised each other never to leave the other following the deaths of their parents. However, Ellen eventually reunites with her childhood beau, Norman Douglas, and asks Rosemary to release her from her promise so she can marry Norman. Rosemary agrees, but now thinks that John Meredith hates her.

Una overhears her father expressing feelings for Rosemary and goes to ask Rosemary to marry her father despite her misgivings about stepmothers, who Mary Vance has told her are always mean. Rosemary sets her mind at ease and agrees to speak to John Meredith again. They become engaged, and Rosemary and Ellen plan a double wedding in the fall.