The scene of ” At Fault ” is laid in Louisiana , and the creole dialect used by Thérèse and her friends is much more agreeable than the slang indulged in by the wealthy St . Louis women. The tale has a somewhat pleasant flavor, and the local color seems to be well preserved. The story ends happily in the orthodox fashion. 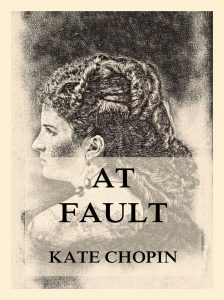 “You got to set mighty still in this pirogue,” said Grégoire, as with a long oar-stroke he pulled out into mid stream.

“Yes, I know,” answered Melicent complacently, arranging herself opposite him in the long narrow boat: all sense of danger which the situation might arouse being dulled by the attractiveness of a new experience.

Her resemblance to Hosmer ended with height and slenderness of figure, olive tinted skin, and eyes and hair which were of that dark brown often miscalled black; but unlike his, her face was awake with an eagerness to know and test the novelty and depth of unaccustomed sensation. She had thus far lived an unstable existence, free from the weight of responsibilities, with a notion lying somewhere deep in her consciousness that the world must one day be taken seriously; but that contingency was yet too far away to disturb the harmony of her days.

She had eagerly responded to her brother’s suggestion of spending a summer with him in Louisiana. Hitherto, having passed her summers North, West, or East as alternating caprice prompted, she was ready at a word to fit her humor to the novelty of a season at the South. She enjoyed in advance the startling effect which her announced intention produced upon her intimate circle at home; thinking that her whim deserved the distinction of eccentricity with which they chose to invest it. But Melicent was chiefly moved by the prospect of an uninterrupted sojourn with her brother, whom she loved blindly, and to whom she attributed qualities of mind and heart which she thought the world had discovered to use against him.

“You got to set mighty still in this pirogue.”

“Yes, I know; you told me so before,” and she laughed.

“W’at are you laughin’ at?” asked Grégoire with amused but uncertain expectancy.

“Laughing at you, Grégoire; how can I help it?” laughing again.

“Betta wait tell I do somethin’ funny, I reckon. Ain’t this a putty sight?” he added, referring to the dense canopy of an overarching tree, beneath which they were gliding, and whose extreme branches dipped quite into the slow moving water.

The scene had not attracted Melicent. For she had been engaged in observing her companion rather closely; his personality holding her with a certain imaginative interest.

The young man whom she so closely scrutinized was slightly undersized, but of close and brawny build. His hands were not so refinedly white as those of certain office bred young men of her acquaintance, yet they were not coarsened by undue toil: it being somewhat an axiom with him to do nothing that an available “nigger” might do for him.

Close fitting, high-heeled boots of fine quality incased his feet, in whose shapeliness he felt a pardonable pride; for a young man’s excellence was often measured in the circle which he had frequented, by the possession of such a foot. A peculiar grace in the dance and a talent for bold repartee were further characteristics which had made Grégoire’s departure keenly felt among certain belles of upper Red River. His features were handsome, of sharp and refined cut; and his eyes black and brilliant as eyes of an alert and intelligent animal sometimes are. Melicent could not reconcile his voice to her liking; it was too softly low and feminine, and carried a note of pleading or pathos, unless he argued with his horse, his dog, or a “nigger,” at which times, though not unduly raised, it acquired a biting quality that served the purpose of relieving him from further form of insistence.

He pulled rapidly and in silence down the bayou, that was now so entirely sheltered from the open light of the sky by the meeting branches above, as to seem a dim leafy tunnel fashioned by man’s ingenuity. There were no perceptible banks, for the water spread out on either side of them, further than they could follow its flashings through the rank underbrush. The dull plash of some object falling into the water, or the wild call of a lonely bird were the only sounds that broke upon the stillness, beside the monotonous dipping of the oars and the occasional low undertones of their own voices. When Grégoire called the girl’s attention to an object near by, she fancied it was the protruding stump of a decaying tree; but reaching for his revolver and taking quiet aim, he drove a ball into the black upturned nozzle that sent it below the surface with an angry splash.

Before she could ask a reason—for it was not her fashion to obey at word of command—the air was filled with the doleful hum of a gray swarm of mosquitoes, which attacked them fiercely.

“You didn’t tell me the bayou was the refuge of such savage creatures,” she said, fastening her veil closely about face and neck, but not before she had felt the sharpness of their angry sting.

“I reckoned you’d ’a knowed all about it: seems like you know everything.” After a short interval he added, “you betta take yo’ veil off.”

She was amused at Grégoire’s authoritative tone and she said to him laughing, yet obeying his suggestion, which carried a note of command: “you shall tell me always, why I should do things.”

“All right,” he replied; “because they ain’t any mo’ mosquitoes; because I want you to see somethin’ worth seein’ afta while; and because I like to look at you,” which he was doing, with the innocent boldness of a forward child. “Ain’t that ’nough reasons?”

“More than enough,” she replied shortly.

The rank and clustering vegetation had become denser as they went on, forming an impenetrable tangle on either side, and pressing so closely above that they often needed to lower their heads to avoid the blow of some drooping branch. Then a sudden and unlooked for turn in the bayou carried them out upon the far-spreading waters of the lake, with the broad canopy of the open sky above them.

“Oh,” cried Melicent, in surprise. Her exclamation was like a sigh of relief which comes at the removal of some pressure from body or brain.

The wildness of the scene caught upon her erratic fancy, speeding it for a quick moment into the realms of romance. She was an Indian maiden of the far past, fleeing and seeking with her dusky lover some wild and solitary retreat on the borders of this lake, which offered them no seeming foot-hold save such as they would hew themselves with axe or tomahawk. Here and there, a grim cypress lifted its head above the water, and spread wide its moss covered arms inviting refuge to the great black-winged buzzards that circled over and about it in mid-air. Nameless voices—weird sounds that awake in a Southern forest at twilight’s approach,—were crying a sinister welcome to the settling gloom.

“This is a place thet can make a man sad, I tell you,” said Grégoire, resting his oars, and wiping the moisture from his forehead. “I wouldn’t want to be yere alone, not fur any money.”

“It is an awful place,” replied Melicent with a little appreciative shudder; adding “do you consider me a bodily protection?” and feebly smiling into his face.

“Oh; I ain’t ’fraid o’ any thing I can see an on’erstan’. I can han’le mos’ any thing thet’s got a body. But they do tell some mighty queer tales ’bout this lake an’ the pine hills yonda.”

“W’y, ole McFarlane’s buried up there on the hill; an’ they’s folks ’round yere says he walks about o’ nights; can’t res’ in his grave fur the niggas he’s killed.”

“Gracious! and who was old McFarlane?”

“The meanest w’ite man thet ever lived, seems like. Used to own this place long befo’ the Lafirmes got it. They say he’s the person that Mrs. W’at’s her name wrote about in Uncle Tom’s Cabin.”

“Legree? I wonder if it could be true?” Melicent asked with interest.

“You’ll take me to his grave, won’t you Grégoire,” she entreated.

“Well, not this evenin’—I reckon not. It’ll have to be broad day, an’ the sun shinin’ mighty bright w’en I take you to ole McFarlane’s grave.”

They had retraced their course and again entered the bayou, from which the light had now nearly vanished, making it needful that they watch carefully to escape the hewn logs that floated in numbers upon the water.

“I didn’t suppose you were ever sad, Grégoire,” Melicent said gently.

“Oh my! yes;” with frank acknowledgment. “You ain’t ever seen me w’en I was real lonesome. ’Tain’t so bad sence you come. But times w’en I git to thinkin’ ’bout home, I’m boun’ to cry—seems like I can’t he’p it.”

“Why did you ever leave home?” she asked sympathetically.

“You see w’en father died, fo’ year ago, mother she went back to France, t’her folks there; she never could stan’ this country—an’ lef’ us boys to manage the place. Hec, he took charge the firs’ year an’ run it in debt. Placide an’ me did’n’ have no betta luck the naxt year. Then the creditors come up from New Orleans an’ took holt. That’s the time I packed my duds an’ lef’.”

“And you came here?”

“No, not at firs’. You see the Santien boys had a putty hard name in the country. Aunt Thérèse, she’d fallen out with father years ago ’bout the way, she said, he was bringin’ us up. Father, he wasn’t the man to take nothin’ from nobody. Never ’lowed any of us to come down yere. I was in Texas, goin’ to the devil I reckon, w’en she sent for me, an’ yere I am.”

“And here you ought to stay, Grégoire.”

“Oh, they ain’t no betta woman in the worl’ then Aunt Thérèse, w’en you do like she wants. See ’em yonda waitin’ fur us? Reckon they thought we was drowned.”