A Narrative from the Mexican War. There is hardly a book that gives so intelligent and lively a description of the actualities of the war in Mexico, and hardly a work in the English language which presents so interesting a picture of a soldier’s life — his round of conversation, his employments, his toils, dangers and escapes — what he sees and does, and how he does it — as this autobiography. The reader will find it difficult to part company with the author. There is no “fine writing” to pall upon the taste. Everything is told naturally, and everything is described earnestly. 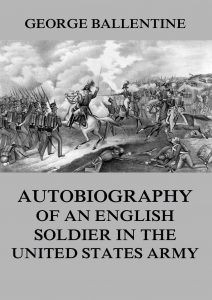 The Mexican War (from Wikipedia):

The Mexican–American War, also known as the Mexican War, the U.S.–Mexican War, the U.S.–Mexico War or the Invasion of Mexico, was an armed conflict between the United States of America and the United Mexican States from 1846 to 1848. It followed in the wake of the 1845 U.S. annexation of Texas, which Mexico considered part of its territory in spite of its de facto secession in the 1836 Texas Revolution.

After its independence in 1821 and brief experiment with monarchy, Mexico became a republic in 1824. It was characterized by considerable instability, leaving it ill-prepared for conflict when war broke out in 1846. Native American raids in Mexico’s sparsely settled north in the decades preceding the war prompted the Mexican government to sponsor migration from the U.S. to the Mexican province of Texas to create a buffer. However, Texans from both countries revolted against the Mexican government in the 1836 Texas Revolution, creating a republic not recognized by Mexico, which still claimed it as part of its national territory. In 1845, Texas agreed to an offer of annexation by the U.S. Congress, and became the 28th state on December 29 that year.

In 1845, James Polk, the newly-elected U.S. president, made a proposition to the Mexican government to purchase the disputed lands between the Nueces River and the Rio Grande. When that offer was rejected, American forces commanded by Major General Zachary Taylor were moved into the disputed territory. They were then attacked by Mexican forces, who killed 12 U.S. soldiers and took 52 as prisoners. These same Mexican troops later laid siege to an American fort along the Rio Grande. This led to the war and the eventual loss of much of Mexico’s northern territory.

The 1848 Treaty of Guadalupe Hidalgo ended the war and specified its major consequence: the Mexican Cession of the territories of Alta California and Santa Fe de Nuevo México to the United States. The U.S. agreed to pay $15 million compensation for the physical damage of the war. In addition, the United States assumed $3.25 million of debt owed by the Mexican government to U.S. citizens. Mexico acknowledged the loss of Texas and thereafter cited the Rio Grande as its national border with the United States.

The territorial expansion of the United States toward the Pacific coast had been the goal of US President James K. Polk, the leader of the Democratic Party. At first, the war was highly controversial in the United States, with the Whig Party, anti-imperialists, and anti-slavery elements strongly opposed. Critics in the United States pointed to the heavy casualties suffered by U.S. forces and the conflict’s high monetary cost. The war intensified the debate over slavery in the United States, contributing to bitter debates that culminated in the American Civil War.

In Mexico, the war came in the middle of political turmoil, which increased into chaos during the conflict. The military defeat and loss of territory was a disastrous blow, causing Mexico to enter “a period of self-examination … as its leaders sought to identify and address the reasons that had led to such a debacle.” In the immediate aftermath of the war, some prominent Mexicans wrote that the war had resulted in “the state of degradation and ruin” in Mexico, further claiming, for “the true origin of the war, it is sufficient to say that the insatiable ambition of the United States, favored by our weakness, caused it.” The shift in the Mexico-U.S. border left many Mexican citizens separated from their national government. For the indigenous peoples who had never accepted Mexican rule, the change in border meant conflicts with a new outside power.