John Calvin’s Commentaries On St. Paul’s Epistle To The Hebrews

Calvin produced commentaries on most of the books of the Bible. His commentaries cover the larger part of the Old Testament, and all of the new excepting Second and Third John and the Apocalypse. His commentaries and lectures stand in the front rank of Biblical interpretation. No doubt the Epistle next in importance to that to the Romans is this to the Hebrews. The truths explained in it might, indeed, have been deduced from other portions of Scripture; but it is a vast advantage and a great satisfaction to find them expressly set forth, and distinctly stated by an inspired Apostle. In condescension to our ignorance, it has pleased God, not only to give us what might have been deemed sufficient for our information, but also to add “line upon line,” so that there might be every help given to those who have a desire to know the truth, and every reasonable accuse taken away from such as resolve to oppose it, and to follow the guidance of self-will, and the delusions of their own proud minds and depraved hearts. It might then, seem strange to us that defect, insufficiency, and obscurity have been ascribed to the Scriptures, did we not know that these have been made by such as wish Revelation to be otherwise than it is; they having imbibed errors and adopted superstitions to which it yields no countenance, but which it condemns in terms so plain, that they must be represented as defective or obscure in order to be evaded. 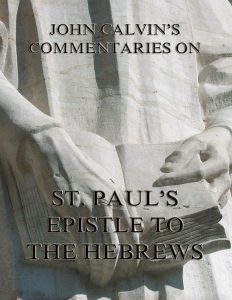 John Calvin’s Commentaries On St. Paul’s Epistle To The Hebrews

John Calvin’s Commentaries On St. Paul’s Epistle To The Hebrews.