A pretty book of tales drawn from life among the Creoles and Acadians of Louisiana. They represent with fidelity and spirit characters and customs unfamiliar to most readers ; they are admirably told, with just enough dialect for local color; and they can hardly fail to be very popular. Some of these stories are little more than croquis – just a brief incident of idea sketched in with a few rapid strokes and left to the imagination of the reader to be materialized, if we may so speak. Others are longer and more finished, but all are full of that subtle, alien quality which holds the Creole apart from the Anglo-Saxon – a quality we do not quite understand and can never reproduce, but which is full of fascination to us from the very fact that it is so unlike ourselves. 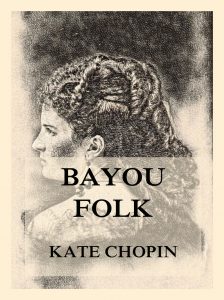 When Offdean learned that Euphrasie was coming to New Orleans, he was delighted to think he would have an opportunity to make some return for the hospitality which he had received from her father. He decided at once that she must see everything: day processions and night parades, balls and tableaux, operas and plays. He would arrange for it all, and he went to the length of begging to be relieved of certain duties that had been assigned him at the club, in order that he might feel himself perfectly free to do so.

The evening following Euphrasie’s arrival, Offdean hastened to call upon her, away down on Esplanade Street. She and the Duplans were staying there with old Mme. Carantelle, Mrs. Duplan’s mother, a delightfully conservative old lady who had not “crossed Canal Street” for many years.

He found a number of people gathered in the long high-ceiled drawing-room,—young people and old people, all talking French, and some talking louder than they would have done if Madame Carantelle had not been so very deaf.

When Offdean entered, the old lady was greeting some one who had come in just before him. It was Placide, and she was calling him Grégoire, and wanting to know how the crops were up on Red River. She met every one from the country with this stereotyped inquiry, which placed her at once on the agreeable and easy footing she liked.

Somehow Offdean had not counted on finding Euphrasie so well provided with entertainment, and he spent much of the evening in trying to persuade himself that the fact was a pleasing one in itself. But he wondered why Placide was with her, and sat so persistently beside her, and danced so repeatedly with her when Mrs. Duplan played upon the piano. Then he could not see by what right these young creoles had already arranged for the Proteus ball, and every other entertainment that he had meant to provide for her.

He went away without having had a word alone with the girl whom he had gone to see. The evening had proved a failure. He did not go to the club as usual, but went to his rooms in a mood which inclined him to read a few pages from a stoic philosopher whom he sometimes affected. But the words of wisdom that had often before helped him over disagreeable places left no impress to-night. They were powerless to banish from his thoughts the look of a pair of brown eyes, or to drown the tones of a girl’s voice that kept singing in his soul.

Placide was not very well acquainted with the city; but that made no difference to him so long as he was at Euphrasie’s side. His brother Hector, who lived in some obscure corner of the town, would willingly have made his knowledge a more intimate one; but Placide did not choose to learn the lessons that Hector was ready to teach. He asked nothing better than to walk with Euphrasie along the streets, holding her parasol at an agreeable angle over her pretty head, or to sit beside her in the evening at the play, sharing her frank delight.

When the night of the Mardi Gras ball came, he felt like a lost spirit during the hours he was forced to remain away from her. He stood in the dense crowd on the street gazing up at her, where she sat on the club-house balcony amid a bevy of gayly dressed women. It was not easy to distinguish her, but he could think of no more agreeable occupation than to stand down there on the street trying to do so.

She seemed during all this pleasant time to be entirely his own, too. It made him very fierce to think of the possibility of her not being entirely his own. But he had no cause whatever to think this. She had grown conscious and thoughtful of late about him and their relationship. She often communed with herself, and as a result tried to act toward him as an engaged girl would toward her fiancé. Yet a wistful look came sometimes into the brown eyes when she walked the streets with Placide, and eagerly scanned the faces of passers-by.

Offdean had written her a note, very studied, very formal, asking to see her a certain day and hour, to consult about matters on the plantation, saying he had found it so difficult to obtain a word with her, that he was forced to adopt this means, which he trusted would not be offensive.

This seemed perfectly right to Euphrasie. She agreed to see him one afternoon—the day before leaving town—in the long, stately drawing-room, quite alone.

It was a sleepy day, too warm for the season. Gusts of moist air were sweeping lazily through the long corridors, rattling the slats of the half-closed green shutters, and bringing a delicious perfume from the courtyard where old Chariot was watering the spreading palms and brilliant parterres. A group of little children had stood awhile quarreling noisily under the windows, but had moved on down the street and left quietness reigning.

Offdean had not long to wait before Euphrasie came to him. She had lost some of that ease which had marked her manner during their first acquaintance. Now, when she seated herself before him, she showed a disposition to plunge at once into the subject that had brought him there. He was willing enough that it should play some rôle, since it had been his pretext for coming; but he soon dismissed it, and with it much restraint that had held him till now. He simply looked into her eyes, with a gaze that made her shiver a little, and began to complain because she was going away next day and he had seen nothing of her; because he had wanted to do so many things when she came—why had she not let him?

“You fo’get I’m no stranger here,” she told him. “I know many people. I’ve been coming so often with Mme. Duplan. I wanted to see mo’ of you, Mr. Offdean”—

“Then you ought to have managed it; you could have done so. It’s—it’s aggravating,” he said, far more bitterly than the subject warranted, “when a man has so set his heart upon something.”

“But it was n’ anything ver’ important,” she interposed; and they both laughed, and got safely over a situation that would soon have been strained, if not critical.

Waves of happiness were sweeping through the soul and body of the girl as she sat there in the drowsy afternoon near the man whom she loved. It mattered not what they talked about, or whether they talked at all. They were both scintillant with feeling. If Offdean had taken Euphrasie’s hands in his and leaned forward and kissed her lips, it would have seemed to both only the rational outcome of things that stirred them. But he did not do this. He knew now that overwhelming passion was taking possession of him. He had not to heap more coals upon the fire; on the contrary, it was a moment to put on the brakes, and he was a young gentleman able to do this when circumstances required.

However, he held her hand longer than he needed to when he bade her good-by. For he got entangled in explaining why he should have to go back to the plantation to see how matters stood there, and he dropped her hand only when the rambling speech was ended.

He left her sitting by the window in a big brocaded armchair. She drew the lace curtain aside to watch him pass in the street. He lifted his hat and smiled when he saw her. Any other man she knew would have done the same thing, but this simple act caused the blood to surge to her cheeks. She let the curtain drop, and sat there like one dreaming. Her eyes, intense with the unnatural light that glowed in them, looked steadily into vacancy, and her lips stayed parted in the half-smile that did not want to leave them.

Placide found her thus, a good while afterward, when he came in, full of bustle, with theatre tickets in his pocket for the last night. She started up, and went eagerly to meet him.

“W’ere have you been, Placide?” she asked with unsteady voice, placing her hands on his shoulders with a freedom that was new and strange to him.

He appeared to her suddenly as a refuge from something, she did not know what, and she rested her hot cheek against his breast. This made him mad, and he lifted her face and kissed her passionately upon the lips.

She crept from his arms after that, and went away to her room, and locked herself in. Her poor little inexperienced soul was torn and sore. She knelt down beside her bed, and sobbed a little and prayed a little. She felt that she had sinned, she did not know exactly in what; but a fine nature warned her that it was in Placide’s kiss.