It is on the true story of Baron Carl Ludwig von Scheurer, in which so many insurance companies were interested, that Wilkie Collins based the plot of his novel ‘Blind Love,’ a work which he did not live to complete by his own hand. In August 1889, when its publication in serial form had been under way for a couple of months, Mr. Collins realized that he would not be able to finish the story. So he sent for Mr. Walter Besant, and that versatile and rapid worker undertook the completion of the book. He has done it, as he says in the preface, to the best of his ability, but he is so conscious of the difference between the style of his own work and that of Wilkie Collins that he invites the critic to lay his finger on the spot where Wilkie Collins’ writing ends and his own begins. Every scene and situation in the novel from beginning to end had been, however, outlined by Mr. Collins before the hand of death was laid upon his pen, and the story, as a story, must therefore be credited to him. In ‘Blind Love’ we find Baron von Scheurer transformed into Lord Harry Norland, the wild and reckless younger son of an Irish peer, while Dr. Castelnau furnishes the prototype of Dr. Vimpany, an impecunious and unscrupulous medical man practising in the English provinces. After some preliminaries in Ireland and England which serve to present the wild Irish Lord in a vivid way, and to lead the heroine, Iris Henley, into his clutches through the blind love which drives her to her ruin, the scene shifts to a suburb of Paris, where the conspiracy to swindle the insurance company is hatched and successfully consummated. In dealing with a plot of this character Wilkie Collins is on familiar ground, and it is needless to say that the whole business is managed in a masterly way. ‘Blind Love’ possesses, as the last work of the author of ‘The Moonstone’ and ‘The Woman in White’, a peculiar and melancholy interest. 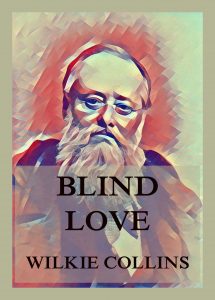 CAREFULLY following his instructions, he consulted the third volume of Gibbon’s great History, and found, between the seventy-eighth and seventy-ninth pages, something remarkable this time.

It was a sheet of delicately-made paper, pierced with a number of little holes, infinitely varied in size, and cut with the smoothest precision. Having secured this curious object, while the librarian’s back was turned, Dennis Howmore reflected.

A page of paper, unintelligibly perforated for some purpose unknown, was in itself a suspicious thing. And what did suspicion suggest to the inquiring mind in South-Western Ireland, before the suppression of the Land League? Unquestionably—-Police!

On the way back to his employer, the banker’s clerk paid a visit to an old friend—a journalist by profession, and a man of varied learning and experience as well. Invited to inspect the remarkable morsel of paper, and to discover the object with which the perforations had been made, the authority consulted proved to be worthy of the trust reposed in him. Dennis left the newspaper office an enlightened man—with information at the disposal of Sir Giles, and with a sense of relief which expressed itself irreverently in these words: “Now I have got him!”

The bewildered banker looked backwards and forwards from the paper to the clerk, and from the clerk to the paper. “I don’t understand it,” he said. “Do you?”

Still preserving the appearance of humility, Dennis asked leave to venture on a guess. The perforated paper looked, as he thought, like a Puzzle. “If we wait for a day or two,” he suggested, “the Key to it may possibly reach us.”

On the next day, nothing happened. On the day after, a second letter made another audacious demand on the fast failing patience of Sir Giles Mountjoy.

Even the envelope proved to be a Puzzle on this occasion; the postmark was “Ardoon.” In other words, the writer had used the postman as a messenger, while he or his accomplice was actually in the town, posting the letter within half-a-minute’s walk of the bank! The contents presented an impenetrable mystery, the writing looked worthy of a madman. Sentences appeared in the wildest state of confusion, and words were so mutilated as to be unintelligible. This time the force of circumstances was more than Sir Giles could resist. He took the clerk into his confidence at last.

“Let us begin at the beginning,” he said. “There is the letter you saw on my bed, when I first sent for you. I found it waiting on my table when I woke; and I don’t know who put it there. Read it.”

“Sir Giles Mountjoy,—I have a disclosure to make, in which one of the members of your family is seriously interested. Before I can venture to explain myself, I must be assured that I can trust to your good faith. As a test of this, I require you to fulfil the two conditions that follow—and to do it without the slightest loss of time. I dare not trust you yet with my address, or my signature. Any act of carelessness, on my part, might end fatally for the true friend who writes these lines. If you neglect this warning, you will regret it to the end of your life.”

To the conditions on which the letter insisted there is no need to allude. They had been complied with when the discoveries were made at the back of the milestone, and between the pages of Gibson’s history. Sir Giles had already arrived at the conclusion that a conspiracy was in progress to assassinate him, and perhaps to rob the bank. The wiser head clerk pointed to the perforated paper and the incomprehensible writing received that morning. “If we can find out what these mean,” he said, “you may be better able, sir, to form a correct opinion.”

“And who is to do that?” the banker asked.

“I can but try, sir,” was the modest reply, “if you see no objection to my making the attempt.”

Sir Giles approved of the proposed experiment, silently and satirically, by a bend of his head.

Too discreet a man to make a suspiciously ready use of the information which he had privately obtained, Dennis took care that his first attempt should not be successful. After modestly asking permission to try again, he ventured on the second occasion to arrive at a happy discovery. Lifting the perforated paper, he placed it delicately over the page which contained the unintelligible writing. Words and sentences now appeared (through the holes in the paper) in their right spelling and arrangement, and addressed Sir Giles in these terms:

“I beg to thank you, sir, for complying with my conditions. You have satisfied me of your good faith. At the same time, it is possible that you may hesitate to trust a man who is not yet able to admit you to his confidence. The perilous position in which I stand obliges me to ask for two or three days more of delay, before I can safely make an appointment with you. Pray be patient—and on no account apply for advice or protection to the police.”

“Those last words,” Sir Giles declared, “are conclusive! The sooner I am under the care of the law the better. Take my card to the police-office.”

“Do you mean that you don’t agree with me?”

“You were always an obstinate man Dennis; and it grows on you as you get older. Never mind! Let’s have it out. Who do you say is the person pointed at in these rascally letters?”

“One of the members of my family?” Sir Giles repeated, on his side. “Why, man alive, what are you thinking of? I’m an old bachelor, and I haven’t got a family.”

“There is your brother, sir.”

“My brother is in France—out of the way of the wretches who are threatening me. I wish I was with him!”

“There are your brother’s two sons, Sir Giles.”

“Well? And what is there to be afraid of? My nephew, Hugh, is in London—and, mind! not on a political errand. I hope, before long, to hear that he is going to be married—if the strangest and nicest girl in England will have him. What’s wrong now?”

Dennis explained. “I only wished to say, sir, that I was thinking of your other nephew.”

Sir Giles laughed. “Arthur in danger!” he exclaimed. “As harmless a young man as ever lived. The worst one can say of him is that he is throwing away his money—farming in Kerry.”

“Excuse me, Sir Giles; there’s not much chance of his throwing away his money, where he is now. Nobody will venture to take his money. I met with one of Mr. Arthur’s neighbours at the market yesterday. Your nephew is boycotted.”

“So much the better,” the obstinate banker declared. “He will be cured of his craze for farming; and he will come back to the place I am keeping for him in the office.”

For the moment, Sir Giles was staggered. “Have you heard something that you haven’t told me yet?” he asked.

“No, sir. I am only bearing in mind something which—with all respect—I think you have forgotten. The last tenant on that bit of land in Kerry refused to pay his rent. Mr. Arthur has taken what they call an evicted farm. It’s my firm belief,” said the head clerk, rising and speaking earnestly, “that the person who has addressed those letters to you knows Mr. Arthur, and knows he is in danger—and is trying to save your nephew (by means of your influence), at the risk of his own life.”

Sir Giles shook his head. “I call that a far-fetched interpretation, Dennis. If what you say is true, why didn’t the writer of those anonymous letters address himself to Arthur, instead of to me?”

“I gave it as my opinion just now, sir, that the writer of the letter knew Mr. Arthur.”

Dennis stood to his guns.

“Anybody who is acquainted with Mr. Arthur,” he persisted, “knows that (with all sorts of good qualities) the young gentleman is headstrong and rash. If a friend told him he was in danger on the farm, that would be enough of itself to make him stop where he is, and brave it out. Whereas you, sir, are known to be cautious and careful, and farseeing and discreet.” He might have added: And cowardly and obstinate, and narrow-minded and inflated by stupid self-esteem. But respect for his employer had blindfolded the clerk’s observation for many a long year past. If one man may be born with the heart of a lion, another man may be born with the mind of a mule. Dennis’s master was one of the other men.