The Legacy of Cain

The Legacy of Cain – Wilkie Collins

Wilkie Collins’ last-but-one novel was originally published in 1889. The Reverend Abel Gracedieu raises two daughters. One of them was adopted seventeen years before the story starts because her mother was executed for murdering her husband. The main question of the plot is whether this adoption will not end in a very bad away because the daughter is allegedly as evil and wicked as her mother …. 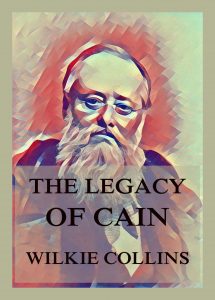 The Legacy of Cain.

The Legacy of Cain.

The Prisoner was seated on her bed, quietly talking with the woman appointed to watch her. When she rose to receive us, I saw the Minister start. The face that confronted him would, in my opinion, have taken any man by surprise, if he had first happened to see it within the walls of a prison.

Visitors to the picture-galleries of Italy, growing weary of Holy Families in endless succession, observe that the idea of the Madonna, among the rank and file of Italian Painters, is limited to one changeless and familiar type. I can hardly hope to be believed when I say that the personal appearance of the murderess recalled that type. She presented the delicate light hair, the quiet eyes, the finely-shaped lower features and the correctly oval form of face, repeated in hundreds on hundreds of the conventional works of Art to which I have ventured to allude. To those who doubt me, I can only declare that what I have here written is undisguised and absolute truth. Let me add that daily observation of all classes of criminals, extending over many years, has considerably diminished my faith in physiognomy as a safe guide to the discovery of character. Nervous trepidation looks like guilt. Guilt, firmly sustained by insensibility, looks like innocence. One of the vilest wretches ever placed under my charge won the sympathies (while he was waiting for his trial) of every person who saw him, including even the persons employed in the prison. Only the other day, ladies and gentlemen coming to visit me passed a body of men at work on the road. Judges of physiognomy among them were horrified at the criminal atrocity betrayed in every face that they noticed. They condoled with me on the near neighborhood of so many convicts to my official place of residence. I looked out of the window and saw a group of honest laborers (whose only crime was poverty) employed by the parish!

Having instructed the female warder to leave the room—but to take care that she waited within call—I looked again at the Minister.

Confronted by the serious responsibility that he had undertaken, he justified what he had said to me. Still pale, still distressed, he was now nevertheless master of himself. I turned to the door to leave him alone with the Prisoner. She called me back.

“Before this gentleman tries to convert me,” she said, “I want you to wait here and be a witness.”

Finding that we were both willing to comply with this request, she addressed herself directly to the Minister. “Suppose I promise to listen to your exhortations,” she began, “what do you promise to do for me in return?”

The voice in which she spoke to him was steady and clear; a marked contrast to the tremulous earnestness with which he answered her.

“I promise to urge you to repentance and the confession of your crime. I promise to implore the divine blessing on me in the effort to save your poor guilty soul.”

She looked at him, and listened to him, as if he was speaking to her in an unknown tongue, and went on with what she had to say as quietly as ever.

“When I am hanged to-morrow, suppose I die without confessing, without repenting—are you one of those who believe I shall be doomed to eternal punishment in another life?”

“I believe in the mercy of God.”

“Answer my question, if you please. Is an impenitent sinner eternally punished? Do you believe that?”

“My Bible leaves me no other alternative.”

She paused for a while, evidently considering with special attention what she was about to say next.

“As a religious man,” she resumed, “would you be willing to make some sacrifice, rather than let a fellow-creature go—after a disgraceful death—to everlasting torment?”

“I know of no sacrifice in my power,” he said, fervently, “to which I would not rather submit than let you die in the present dreadful state of your mind.”

The Prisoner turned to me. “Is the person who watches me waiting outside?”

“Will you be so kind as to call her in? I have a message for her.”

It was plain that she had been leading the way to the delivery of that message, whatever it might be, in all that she had said up to the present time. So far my poor powers of penetration helped me, and no further.

The warder appeared, and received her message. “Tell the woman who has come here with my little girl that I want to see the child.”

Taken completely by surprise, I signed to the attendant to wait for further instructions.

In a moment more I had sufficiently recovered myself to see the impropriety of permitting any obstacle to interpose between the Minister and his errand of mercy. I gently reminded the Prisoner that she would have a later opportunity of seeing her child. “Your first duty,” I told her, “is to hear and to take to heart what the clergyman has to say to you.”

“Take the parson away with you,” she said. “I refuse to listen to him.”

The patient Minister yielded, and appealed to me to follow his example. I reluctantly sanctioned the delivery of the message.

After a brief interval the child was brought to us, tired and sleepy. For a while the nurse roused her by setting her on her feet. She happened to notice the Minister first. Her bright eyes rested on him, gravely wondering. He kissed her, and, after a momentary hesitation, gave her to her mother. The horror of the situation overpowered him: he turned his face away from us. I understood what he felt; he almost overthrew my own self-command.

The Prisoner spoke to the nurse in no friendly tone: “You can go.”

The nurse turned to me, ostentatiously ignoring the words that had been addressed to her. “Am I to go, sir, or to stay?” I suggested that she should return to the waiting-room. She returned at once in silence. The Prisoner looked after her as she went out, with such an expression of hatred in her eyes that the Minister noticed it.

“What has that person done to offend you?” he asked.

“She is the last person in the whole world whom I should have chosen to take care of my child, if the power of choosing had been mine. But I have been in prison, without a living creature to represent me or to take my part. No more of that; my troubles will be over in a few hours more. I want you to look at my little girl, whose troubles are all to come. Do you call her pretty? Do you feel interested in her?”

The sorrow and pity in his face answered for him.

Quietly sleeping, the poor baby rested on her mother’s bosom. Was the heart of the murderess softened by the divine influence of maternal love? The hands that held the child trembled a little. For the first time it seemed to cost her an effort to compose herself, before she could speak to the Minister again.

“When I die to-morrow,” she said, “I leave my child helpless and friendless—disgraced by her mother’s shameful death. The workhouse may take her—or a charitable asylum may take her.” She paused; a first tinge of color rose on her pale face; she broke into an outburst of rage. “Think of my daughter being brought up by charity! She may suffer poverty, she may be treated with contempt, she may be employed by brutal people in menial work. I can’t endure it; it maddens me. If she is not saved from that wretched fate, I shall die despairing, I shall die cursing—”

The Minister sternly stopped her before she could say the next word. To my astonishment she appeared to be humbled, to be even ashamed: she asked his pardon: “Forgive me; I won’t forget myself again. They tell me you have no children of your own. Is that a sorrow to you and your wife?”

Her altered tone touched him. He answered sadly and kindly: “It is the one sorrow of our lives.”

The purpose which she had been keeping in view from the moment when the Minister entered her cell was no mystery now. Ought I to have interfered? Let me confess a weakness, unworthy perhaps of my office. I was so sorry for the child—I hesitated.

My silence encouraged the mother. She advanced to the Minister with the sleeping infant in her arms.

“I daresay you have sometimes thought of adopting a child?” she said. “Perhaps you can guess now what I had in my mind, when I asked if you would consent to a sacrifice? Will you take this wretched innocent little creature home with you?” She lost her self-possession once more. “A motherless creature to-morrow,” she burst out. “Think of that.”

God knows how I still shrunk from it! But there was no alternative now; I was bound to remember my duty to the excellent man, whose critical position at that moment was, in some degree at least, due to my hesitation in asserting my authority. Could I allow the Prisoner to presume on his compassionate nature, and to hurry him into a decision which, in his calmer moments, he might find reason to regret? I spoke to him. Does the man live who—having to say what I had to say—could have spoken to the doomed mother?

“I am sorry to have allowed this to go on,” I said. “In justice to yourself, sir, don’t answer!”

She turned on me with a look of fury.

“He shall answer,” she cried.

I saw, or thought I saw, signs of yielding in his face. “Take time,” I persisted—“take time to consider before you decide.”

She stepped up to me.

“Take time?” she repeated. “Are you inhuman enough to talk of time, in my presence?”