Wilkie Collins’ ‘Little Novels’ is a collection of ingenious stories, told with some of the marvellous skill that made the author of The Woman in White famous. Villany is frustrated by devious ways, and a mind must be much preoccupied indeed that cannot for a time lose itself in Mr. Collins’ ingenious combinations. Mr. Collins does not favor us with any wicked monk, and there is little of that coarseness which intrudes into several of his earlier stories. All over a fantastic read. 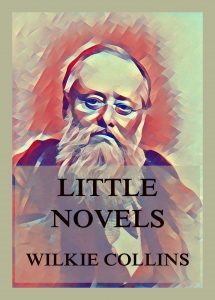 THE lady left the Gardens by the nearest gate; stopping to lower her veil before she turned into the busy thoroughfare which leads to Kensington. Advancing a little way along the High Street, she entered a house of respectable appearance, with a card in one of the windows which announced that apartments were to let.

Mr. Rayburn waited a minute—then knocked at the door, and asked if he could see the mistress of the house. The servant showed him into a room on the ground floor, neatly but scantily furnished. One little white object varied the grim brown monotony of the empty table. It was a visiting-card.

With a child’s unceremonious curiosity Lucy pounced on the card, and spelled the name, letter by letter: “Z, A, N, T,” she repeated. “What does that mean?”

Her father looked at the card, as he took it away from her, and put it back on the table. The name was printed, and the address was added in pencil: “Mr. John Zant, Purley’s Hotel.”

The mistress made her appearance. Mr. Rayburn heartily wished himself out of the house again, the moment he saw her. The ways in which it is possible to cultivate the social virtues are more numerous and more varied than is generally supposed. This lady’s way had apparently accustomed her to meet her fellow-creatures on the hard ground of justice without mercy. Something in her eyes, when she looked at Lucy, said: “I wonder whether that child gets punished when she deserves it?”

“Do you wish to see the rooms which I have to let?” she began.

Mr. Rayburn at once stated the object of his visit—as clearly, as civilly, and as concisely as a man could do it. He was conscious (he added) that he had been guilty perhaps of an act of intrusion.

The manner of the mistress of the house showed that she entirely agreed with him. He suggested, however, that his motive might excuse him. The mistress’s manner changed, and asserted a difference of opinion.

“I only know the lady whom you mention,” she said, “as a person of the highest respectability, in delicate health. She has taken my first-floor apartments, with excellent references; and she gives remarkably little trouble. I have no claim to interfere with her proceedings, and no reason to doubt that she is capable of taking care of herself.”

Mr. Rayburn unwisely attempted to say a word in his own defense.

“Allow me to remind you—” he began.

“Of what I observed, when I happened to see the lady in Kensington Gardens.”

“I am not responsible for what you observed in Kensington Gardens. If your time is of any value, pray don’t let me detain you.”

Dismissed in those terms, Mr. Rayburn took Lucy’s hand and withdrew. He had just reached the door, when it was opened from the outer side. The Lady of Kensington Gardens stood before him. In the position which he and his daughter now occupied, their backs were toward the window. Would she remember having seen them for a moment in the Gardens?

“Excuse me for intruding on you,” she said to the landlady. “Your servant tells me my brother-in-law called while I was out. He sometimes leaves a message on his card.”

She looked for the message, and appeared to be disappointed: there was no writing on the card.

Mr. Rayburn lingered a little in the doorway on the chance of hearing something more. The landlady’s vigilant eyes discovered him.

“Do you know this gentleman?” she said maliciously to her lodger.

“Not that I remember.”

Replying in those words, the lady looked at Mr. Rayburn for the first time; and suddenly drew back from him.

“Yes,” she said, correcting herself; “I think we met—”

Her embarrassment overpowered her; she could say no more.

Mr. Rayburn compassionately finished the sentence for her.

“We met accidentally in Kensington Gardens,” he said.

She seemed to be incapable of appreciating the kindness of his motive. After hesitating a little she addressed a proposal to him, which seemed to show distrust of the landlady.

“Will you let me speak to you upstairs in my own rooms?” she asked.

Without waiting for a reply, she led the way to the stairs. Mr. Rayburn and Lucy followed. They were just beginning the ascent to the first floor, when the spiteful landlady left the lower room, and called to her lodger over their heads: “Take care what you say to this man, Mrs. Zant! He thinks you’re mad.”

Mrs. Zant turned round on the landing, and looked at him. Not a word fell from her lips. She suffered, she feared, in silence. Something in the sad submission of her face touched the springs of innocent pity in Lucy’s heart. The child burst out crying.

That artless expression of sympathy drew Mrs. Zant down the few stairs which separated her from Lucy.

“May I kiss your dear little girl?” she said to Mr. Rayburn. The landlady, standing on the mat below, expressed her opinion of the value of caresses, as compared with a sounder method of treating young persons in tears: “If that child was mine,” she remarked, “I would give her something to cry for.”

In the meantime, Mrs. Zant led the way to her rooms.

The first words she spoke showed that the landlady had succeeded but too well in prejudicing her against Mr. Rayburn.

“Will you let me ask your child,” she said to him, “why you think me mad?”

He met this strange request with a firm answer.

“You don’t know yet what I really do think. Will you give me a minute’s attention?”

“No,” she said positively. “The child pities me, I want to speak to the child. What did you see me do in the Gardens, my dear, that surprised you?” Lucy turned uneasily to her father; Mrs. Zant persisted. “I first saw you by yourself, and then I saw you with your father,” she went on. “When I came nearer to you, did I look very oddly—as if I didn’t see you at all?”

“You are confusing my little girl,” he said. “Allow me to answer your questions—or excuse me if I leave you.”

There was something in his look, or in his tone, that mastered her. She put her hand to her head.

“I don’t think I’m fit for it,” she answered vacantly. “My courage has been sorely tried already. If I can get a little rest and sleep, you may find me a different person. I am left a great deal by myself; and I have reasons for trying to compose my mind. Can I see you tomorrow? Or write to you? Where do you live?”

Mr. Rayburn laid his card on the table in silence. She had strongly excited his interest. He honestly desired to be of some service to this forlorn creature—abandoned so cruelly, as it seemed, to her own guidance. But he had no authority to exercise, no sort of claim to direct her actions, even if she consented to accept his advice. As a last resource he ventured on an allusion to the relative of whom she had spoken downstairs.

“When do you expect to see your brother-in-law again?” he said.

She turned aside to take leave of Lucy.

“Good-by, my little friend. If you live to grow up, I hope you will never be such a miserable woman as I am.” She suddenly looked round at Mr. Rayburn. “Have you got a wife at home?” she asked.

“And you have a child to comfort you! Please leave me; you harden my heart. Oh, sir, don’t you understand? You make me envy you!”

Mr. Rayburn was silent when he and his daughter were out in the street again. Lucy, as became a dutiful child, was silent, too. But there are limits to human endurance—and Lucy’s capacity for self-control gave way at last.

“Are you thinking of the lady, papa?” she said.

He only answered by nodding his head. His daughter had interrupted him at that critical moment in a man’s reflections, when he is on the point of making up his mind. Before they were at home again Mr. Rayburn had arrived at a decision. Mrs. Zant’s brother-in-law was evidently ignorant of any serious necessity for his interference—or he would have made arrangements for immediately repeating his visit. In this state of things, if any evil happened to Mrs. Zant, silence on Mr. Rayburn’s part might be indirectly to blame for a serious misfortune. Arriving at that conclusion, he decided upon running the risk of being rudely received, for the second time, by another stranger.

Leaving Lucy under the care of her governess, he went at once to the address that had been written on the visiting-card left at the lodging-house, and sent in his name. A courteous message was returned. Mr. John Zant was at home, and would be happy to see him.