Bhakti-Yoga is a real, genuine search after the Lord, a search beginning, continuing, and ending in love. One single moment of the madness of extreme love to God brings us eternal freedom. This love cannot be reduced to any earthly benefit, because so long as worldly desires last, that kind of love does not come. Bhakti is greater than karma, greater than Yoga, because these are intended for an object in view, while Bhakti is its own fruition, its own means and its own end.

This edition includes the Swami’s ten lectures on Bhakti Yoga, plus ten more on the Supreme Devotion called Para-Bhakti. 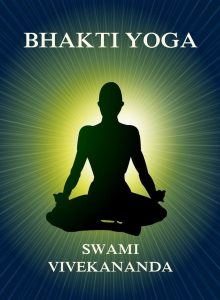 The Bhakti movement (from Wikipedia):

The Bhakti Movement was a rapid growth of bhakti, first starting in the later part of 1st millennium CE, from Tamil Nadu in Southern India with the Saiva Nayanars and the Vaisnava Alvars. Their ideas and practices inspired bhakti poetry and devotion throughout India over the 12th-18th century CE. The Alvars (“those immersed in God”) were Vaishnava poet-saints who wandered from temple to temple singing the praises of Vishnu. They established temple sites (Srirangam is one) and converted many people to Vaishnavism.

Like the Alvars the Saiva Nayanar poets were influential. The Tirumurai, a compilation of hymns by sixty-three Nayanar poets, is still of great importance in South India. Hymns by three of the most prominent poets, Appar (7th century CE), Campantar (7th century) and Sundarar (9th century), were compiled into the Tevaram, the first volumes of the Tirumurai. The poets’ itinerant lifestyle helped create temple and pilgrimage sites and spread devotion to Shiva. Early Tamil-Siva bhakti poets are quoted the Black Yajurveda. The Alwars and Nayanmars were instrumental in propagating the Bhakti tradition. The Bhagavata Purana’s references to the South Indian Alvar saints, along with its emphasis on bhakti, have led many scholars to give it South Indian origins, though some scholars question whether this evidence excludes the possibility that bhakti movement had parallel developments in other parts of India.

Scholars state that the bhakti movement focussed on the gods Vishnu, Shiva, Shakti and other deities, that developed and spread in India, was in response to the arrival of Islam in India about 8th century CE, and subsequent religious violence. This view is contested by other scholars.

The Bhakti movement swept over east and north India from the fifteenth-century onwards, reaching its zenith between the 15th and 17th century CE. Bhakti poetry and ideas influenced many aspects of Hindu culture, religious and secular, and became an integral part of Indian society. It extended its influence to Sufism, Christianity, and Jainism. Sikhism was founded by Nanak in the 15th century, during the bhakti movement period, and scholars call it a Bhakti sect of Indian traditions.

The movement has traditionally been considered as an influential social reformation in Hinduism, and provided an individual-focused alternative path to spirituality regardless of one’s birth caste or gender. Postmodern scholars question this traditional view and whether the Bhakti movement were ever a social reform or rebellion of any kind. They suggest Bhakti movement was a revival, reworking and recontextualization of ancient Vedic traditions.