Capital and Interest: A Critical History of Economic Theory

Von Boehm-Bawerk is one of the leading economists of the so-called Austrian school. With Karl Menger and others, he has contributed to the development of a theory of value which has received wide acceptance, and has been the cause of still wider discussion, in the economic world. This theory, as elaborated by Boehm von Bawerk, is based largely upon psychological principles. Its chief feature consists in a searching analysis of ‘subjective value.’ In his “Capital and Interest”, the author makes a brilliant and original study of these two subjects. He does not accept the connuon classification of land, labor, and capital as the three sources of production, but regards the two former only as real sources, while capital is only a means of production. ‘Interest’ is employed as a general term for interest in the common sense, and for profits, and its cause and justification are found in the great principle of the difference in value between present ‘goods’ and future ‘goods.’ 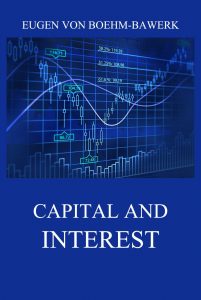 Capital and Interest: A Critical History of Economic Theory

Capital and Interest: A Critical History of Economic Theory.

While studying to be a lawyer at the University of Vienna, he read Carl Menger’s Principles of Economics. Though he never studied under Menger, he became an adherent of his theories. Joseph Schumpeter said that Böhm-Bawerk “was so completely the enthusiastic disciple of Menger that it is hardly necessary to look for other influences.” During his time at the Vienna university, he became good friends with Friedrich von Wieser, who later became Böhm-Bawerk’s brother-in-law. After Vienna, he studied political economy and social science at the universities of Heidelberg, Leipzig and Jena, under Karl Knies, Wilhelm Roscher and Bruno Hildebrand.

After completing his studies in 1872, he entered the Austrian ministry of finance. He held various posts until 1880, when he became qualified as a Privatdozent of political economy at Vienna. The following year, however, he transferred his services to the University of Innsbruck, where he remained until 1889, becoming professor in 1884. During this time, he published the first two (out of three) volumes of his magnum opus, Capital and Interest.

In 1889 he became councillor in the ministry of finance in Vienna, and represented the government in the lower house on all questions of taxation. He drafted a proposal for direct-tax reform. The Austrian system at the time taxed production heavily, especially during wartime, providing massive disincentives to investment. Böhm-Bawerk’s proposal called for a modern income tax, which was soon approved and met with a great deal of success in the next few years.

He then became Austrian minister of finance in 1895. He was to serve briefly and again on another occasion, although a third time he remained in the post from 1900 to 1904. As finance minister he fought continuously for strict maintenance of the legally fixed gold standard and a balanced budget. In 1902 he eliminated the sugar subsidy, which had been a feature of the Austrian economy for nearly two centuries. He finally resigned in 1904, when the increased fiscal demands of the army threatened to unbalance the budget. Economic historian Alexander Gerschenkron criticized his “penny pinching, ‘not-one-heller-more-policies’,” and lays much of the blame for Austria’s economic backwardness on Böhm-Bawerk’s unwillingness to spend heavily on public works projects. Joseph Schumpeter praised Böhm-Bawerk’s efforts toward “the financial stability of the country.” His image was on the one-hundred schilling banknote between 1984 and 2002, when the euro was introduced.

In 1897 he was ambassador to the German court. In 1899 he was elevated to the upper chamber (House of Peers). In 1907 he became vice-president and in 1911 president of the Akademie der Wissenschaften (Academy of Science).

He wrote extensive critiques of Karl Marx’s economics in the 1880s and 1890s, and several prominent Marxists—including Rudolf Hilferding—attended his seminar in 1905–06. He returned to teaching in 1904, with a chair at the University of Vienna. He taught many students including Joseph Schumpeter, Ludwig von Mises and Henryk Grossman. He died in 1914.