The Consolation of Philosophy of Boethius

The Consolation of Philosophy of Boethius – Boethius

Boethius’ best-known work is the “Consolations of Philosophy” written during his imprisonment — “by far the most interesting example of prison literature the world has ever seen.” It is a dialogue between Philosophy and Boethius, in which the Queen of Sciences strives to console the fallen statesman. The main argument of the discourse is the transitoriness and unreality of all earthly greatness and the superior desirability of the things of the mind. There are evident traces of the influence of the Neo-Platonists, especially of Proclus, and little, if anything, that can be said to reflect Christian influences. 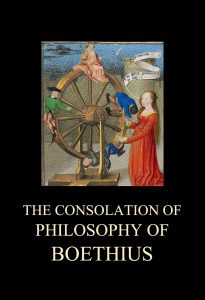 The Consolation of Philosophy of Boethius

The Consolation of Philosophy of Boethius.

Basics on the Consolation of Philosophy (from Wikipedia):

The Consolation of Philosophy was written in AD 523 during a one-year imprisonment Boethius served while awaiting trial – and eventual execution – for the alleged crime of treason under the Ostrogothic King Theodoric the Great. Boethius was at the very heights of power in Rome and was brought down by treachery. This experience inspired the text, which reflects on how evil can exist in a world governed by God (the problem of theodicy), and how happiness is still attainable amidst fickle fortune, while also considering the nature of happiness and God. It has been described as “by far the most interesting example of prison literature the world has ever seen.”

A link to Christianity is often assumed, yet there is no reference made to Jesus Christ or Christianity or any other specific religion other than a few oblique references to Pauline scripture, such as the symmetry between the opening lines of Book 4 Chapter 3 and 1 Corinthians 9:24. God is however represented not only as an eternal and all-knowing being, but as the source of all Good.

Boethius writes the book as a conversation between himself and Lady Philosophy. Lady Philosophy consoles Boethius by discussing the transitory nature of fame and wealth (“no man can ever truly be secure until he has been forsaken by Fortune”), and the ultimate superiority of things of the mind, which she calls the “one true good”. She contends that happiness comes from within, and that virtue is all that one truly has, because it is not imperilled by the vicissitudes of fortune.

Boethius engages questions such as the nature of predestination and free will, why evil men often prosper and good men fall into ruin, human nature, virtue, and justice. He speaks about the nature of free will and determinism when he asks if God knows and sees all, or does man have free will. On human nature, Boethius says that humans are essentially good and only when they give in to “wickedness” do they “sink to the level of being an animal.” On justice, he says criminals are not to be abused, rather treated with sympathy and respect, using the analogy of doctor and patient to illustrate the ideal relationship between prosecutor and criminal.

In the Consolation, Boethius answered religious questions without reference to Christianity, relying solely on natural philosophy and the Classical Greek tradition. He believed in the correspondence between faith and reason. The truths found in Christianity would be no different from the truths found in philosophy. In the words of Henry Chadwick, “If the Consolation contains nothing distinctively Christian, it is also relevant that it contains nothing specifically pagan either…[it] is a work written by a Platonist who is also a Christian, but is not a Christian work.”