Commentaries on the Laws of England Book I: Of the Rights of Persons

Commentaries on the Laws of England Book I: Of the Rights of Persons – Sir William Blackstone

The Commentaries were long regarded as the leading work on the development of English law and played a role in the development of the American legal system. They were in fact the first methodical treatise on the common law suitable for a lay readership since at least the Middle Ages. This is book one out of four, including more than 1000 footnotes and annotations. 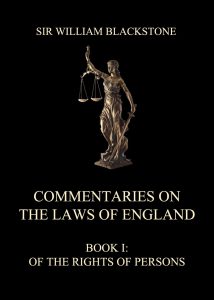 Commentaries on the Laws of England Book I: Of the Rights of Persons

Commentaries on the Laws of England Book I: Of the Rights of Persons.