Elmer Wallace Holmes provides us with a thorough history of one of the most beautiful counties in the US, with its beautiful valleys and magnificent mountains, its equable climate and fertile soil. He tells us about the big cities, the Perris and Moreno valleys, San Jacinto and San Gorgonio and much more … 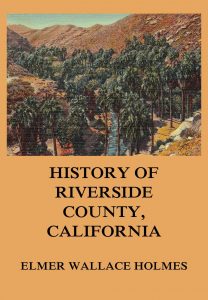 Riverside County, California, is one of fifty-eight counties in the U.S. state of California. As of the 2010 census, the population was 2,189,641, making it the 4th-most populous county in California and the 11th-most populous in the United States. The name was derived from the city of Riverside, which is the county seat.

Roughly rectangular, Riverside County covers 7,208 square miles (18,670 km2) in Southern California, spanning from the Greater Los Angeles area to the Arizona border. Geographically, the county is mostly desert in the central and eastern portions, but has a Mediterranean climate in the western portion. Most of Joshua Tree National Park is located in the county.

The resort cities of Palm Springs, Palm Desert, Indian Wells, La Quinta, Rancho Mirage, and Desert Hot Springs are all located in the Coachella Valley region of Riverside County. Large numbers of Los Angeles area workers have moved to the county in recent years (data from the US Census Bureau for 2007 through 2011) to take advantage of relatively affordable housing. Along with neighboring San Bernardino County, it was one of the fastest growing regions in the state prior to the recent changes in the regional economy. In addition, smaller, but significant, numbers of people have been moving into Southwest Riverside County from the San Diego-Tijuana metropolitan area. The cities of Temecula and Murrieta accounted for 20% of the increase in population of the county between 2000 and 2007.