‘Dear Enemy’, by Jean Webster, is a novel the events of which are related in the form of letters by the heroine. A formal introduction, indeed, to one of the most intimate, realistic and thoroughly enjoyable pieces of fiction ever! How a charming young woman, all depths and tenderness under her somewhat frivolous exterior, accepts the superintendency of an orphan asylum, and with it the charge of some hundred and thirteen sadly neglected orphans, is merely the beginning of this altogether whimsical, joyful tale. How she transforms the dreadful interior of the New York orphanage; what she does for the youngsters who don’t even know how to play; how she becomes engaged to the wrong man; how she storms the inward citadel of the smileless Scotch doctor, are all told in inimitable letters to which are attached many deliciously funny caricature pen sketches by the author. To those who have read Jean Webster’s previous story “Daddy Long-Legs”, this romance cannot but increase the enthusiasm for the popularity of its author. 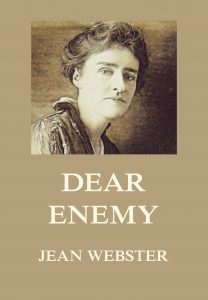 Dr. Robin MacRae and I fought another battle yesterday over a very trivial matter (in which I was right), and since then I have adopted for our doctor a special pet name. “Good morning, Enemy!” was my greeting today, at which he was quite solemnly annoyed. He says he does not wish to be regarded as an enemy. He is not in the least antagonistic—so long as I mold my policy upon his wishes!

We have two new children, Isador Gutschneider and Max Yog, given to us by the Baptist Ladies’ Aid Society. Where on earth do you suppose those children picked up such a religion? I didn’t want to take them, but the poor ladies were very persuasive, and they pay the princely sum of four dollars and fifty cents per week per child. This makes 113, which makes us very crowded. I have half a dozen babies to give away. Find me some kind families who want to adopt.

You know it’s very embarrassing not to be able to remember offhand how large your family is, but mine seems to vary from day to day, like the stock market. I should like to keep it at about par. When a woman has more than a hundred children, she can’t give them the individual attention they ought to have.

This letter has been lying two days on my desk, and I haven’t found the time to stick on a stamp. But now I seem to have a free evening ahead, so I will add a page or two more before starting it on a pleasant journey to Florida.

I am just beginning to pick out individual faces among the children. It seemed at first as though I could never learn them, they looked so hopelessly cut out of one pattern, with those unspeakably ugly uniforms. Now please don’t write back that you want the children put into new clothes immediately. I know you do; you’ve already told me five times. In about a month I shall be ready to consider the question, but just now their insides are more important than their outsides.

There is no doubt about it—orphans in the mass do not appeal to me. I am beginning to be afraid that this famous mother instinct which we hear so much about was left out of my character. Children as children are dirty, spitty little things, and their noses all need wiping. Here and there I pick out a naughty, mischievous little one that awakens a flicker of interest; but for the most part they are just a composite blur of white face and blue check.

With one exception, though. Sadie Kate Kilcoyne emerged from the mass the first day, and bids fair to stay out for all time. She is my special little errand girl, and she furnishes me with all my daily amusement. No piece of mischief has been launched in this institution for the last eight years that did not originate in her abnormal brain. This young person has, to me, a most unusual history, though I understand it’s common enough in foundling circles. She was discovered eleven years ago on the bottom step of a Thirty-ninth Street house, asleep in a pasteboard box labeled, “Altman & Co.”

“Sadie Kate Kilcoyne, aged five weeks. Be kind to her,” was neatly printed on the cover.

The policeman who picked her up took her to Bellevue where the foundlings are pronounced, in the order of their arrival, “Catholic, Protestant, Catholic, Protestant,” with perfect impartiality. Our Sadie Kate, despite her name and blue Irish eyes, was made a Protestant. And here she is growing Irisher and Irisher every day, but, true to her christening, protesting loudly against every detail of life.

Her two little black braids point in opposite directions; her little monkey face is all screwed up with mischief; she is as active as a terrier, and you have to keep her busy every moment. Her record of badnesses occupies pages in the Doomsday Book. The last item reads:

“For stumping Maggie Geer to get a doorknob into her mouth—punishment, the afternoon spent in bed, and crackers for supper.”

It seems that Maggie Geer, fitted with a mouth of unusual stretching capacity, got the doorknob in, but couldn’t get it out. The doctor was called, and cannily solved the problem with a buttered shoe-horn. “Muckle-mouthed Meg,” he has dubbed the patient ever since.

You can understand that my thoughts are anxiously occupied in filling every crevice of Sadie Kate’s existence.

There are a million subjects that I ought to consult with the president about. I think it was very unkind of you and him to saddle me with your orphan asylum and run off South to play. It would serve you right if I did everything wrong. While you are traveling about in private cars, and strolling in the moonlight on palm beaches, please think of me in the drizzle of a New York March, taking care of 113 babies that by rights are yours—and be grateful.

I remain (for a limited time),

I am sending herewith (under separate cover) Sammy Speir, who got mislaid when you paid your morning visit. Miss Snaith brought him to light after you had gone. Please scrutinize his thumb. I never saw a felon, but I have diagnosed it as such.