The books of Jean Webster, like ‘Just Patty’ or ‘When Patty Went to College’ have already shown her rare touch of humor. The letters which Judy writes to her anonymous benefactor might have been cut and dried formal reports of college work; but they aren’t, for Judy is an electric bundle of spicy originality; and her letters to ‘Dear Daddy Long-Legs’ are delicious chronicles of a young girl’s growth out of a starved, lonely childhood into happy, rich womanhood. The illustrations are the author’s own and they look as if they had just been scribbled in fun, on the margin of a letter. 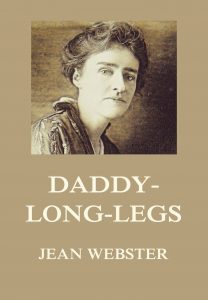 THE first Wednesday in every month was a Perfectly Awful Day—a day to be awaited with dread, endured with courage and forgotten with haste. Every floor must be spotless, every chair dustless, and every bed without a wrinkle. Ninety-seven squirming little orphans must be scrubbed and combed and buttoned into freshly starched ginghams; and all ninety-seven reminded of their manners, and told to say, “Yes, sir,” “No, sir,” whenever a Trustee spoke.

It was a distressing time; and poor Jerusha Abbott, being the oldest orphan, had to bear the brunt of it. But this particular first Wednesday, like its predecessors, finally dragged itself to a close. Jerusha escaped from the pantry where she had been making sandwiches for the asylum’s guests, and turned upstairs to accomplish her regular work. Her special care was room F, where eleven little tots, from four to seven, occupied eleven little cots set in a row. Jerusha assembled her charges, straightened their rumpled frocks, wiped their noses, and started them in an orderly and willing line toward the dining-room to engage themselves for a blessed half hour with bread and milk and prune pudding.

Then she dropped down on the window seat and leaned throbbing temples against the cool glass. She had been on her feet since five that morning, doing everybody’s bidding, scolded and hurried by a nervous matron. Mrs. Lippett, behind the scenes, did not always maintain that calm and pompous dignity with which she faced an audience of Trustees and lady visitors. Jerusha gazed out across a broad stretch of frozen lawn, beyond the tall iron paling that marked the confines of the asylum, down undulating ridges sprinkled with country estates, to the spires of the village rising from the midst of bare trees.

The day was ended—quite successfully, so far as she knew. The Trustees and the visiting committee had made their rounds, and read their reports, and drunk their tea, and now were hurrying home to their own cheerful firesides, to forget their bothersome little charges for another month. Jerusha leaned forward watching with curiosity—and a touch of wistfulness—the stream of carriages and automobiles that rolled out of the asylum gates. In imagination she followed first one equipage then another to the big houses dotted along the hillside. She pictured herself in a fur coat and a velvet hat trimmed with feathers leaning back in the seat and nonchalantly murmuring “Home” to the driver. But on the door-sill of her home the picture grew blurred.

Jerusha had an imagination—an imagination, Mrs. Lippett told her, that would get her into trouble if she didn’t take care—but keen as it was, it could not carry her beyond the front porch of the houses she would enter. Poor, eager, adventurous little Jerusha, in all her seventeen years, had never stepped inside an ordinary house; she could not picture the daily routine of those other human beings who carried on their lives undiscommoded by orphans.

And I think you ’d

Tommy Dillon who had joined the choir, came singing up the stairs and down the corridor, his chant growing louder as he approached room F. Jerusha wrenched herself from the window and refaced the troubles of life.

“Who wants me?” she cut into Tommy’s chant with a note of sharp anxiety.

Mrs. Lippett in the office,

And I think she‘s mad.

Tommy piously intoned, but his accent was not entirely malicious. Even the most hardened little orphan felt sympathy for an erring sister who was summoned to the office to face an annoyed matron; and Tommy liked Jerusha even if she did sometimes jerk him by the arm and nearly scrub his nose off.

Jerusha went without comment, but with two parallel lines on her brow. What could have gone wrong, she wondered. Were the sandwiches not thin enough? Were there shells in the nut cakes? Had a lady visitor seen the hole in Susie Hawthorn’s stocking? Had—O horrors!—one of the cherubic little babes in her own room F “sassed” a Trustee?

The long lower hall had not been lighted, and as she came downstairs, a last Trustee stood, on the point of departure, in the open door that led to the porte-cochère. Jerusha caught only a fleeting impression of the man—and the impression consisted entirely of tallness. He was waving his arm toward an automobile waiting in the curved drive. As it sprang into motion and approached, head on for an instant, the glaring headlights threw his shadow sharply against the wall inside. The shadow pictured grotesquely elongated legs and arms that ran along the floor and up the wall of the corridor. It looked, for all the world, like a huge, wavering daddy-long-legs.

Jerusha’s anxious frown gave place to quick laughter. She was by nature a sunny soul, and had always snatched the tiniest excuse to be amused. If one could derive any sort of entertainment out of the oppressive fact of a Trustee, it was something unexpected to the good. She advanced to the office quite cheered by the tiny episode, and presented a smiling face to Mrs. Lippett. To her surprise the matron was also, if not exactly smiling, at least appreciably affable; she wore an expression almost as pleasant as the one she donned for visitors.

“Sit down, Jerusha, I have something to say to you.”

Jerusha dropped into the nearest chair and waited with a touch of breathlessness. An automobile flashed past the window; Mrs. Lippett glanced after it.

“Did you notice the gentleman who has just gone?”

“He is one of our most affluential Trustees, and has given large sums of money toward the asylum’s support. I am not at liberty to mention his name; he expressly stipulated that he was to remain unknown.”

Jerusha’s eyes widened slightly; she was not accustomed to being summoned to the office to discuss the eccentricities of Trustees with the matron.

“This gentleman has taken an interest in several of our boys. You remember Charles Benton and Henry Freize? They were both sent through college by Mr.—er—this Trustee, and both have repaid with hard work and success the money that was so generously expended. Other payment the gentleman does not wish. Heretofore his philanthropies have been directed solely toward the boys; I have never been able to interest him in the slightest degree in any of the girls in the institution, no matter how deserving. He does not, I may tell you, care for girls.”

“No, ma’am,” Jerusha murmured, since some reply seemed to be expected at this point.

“To-day at the regular meeting, the question of your future was brought up.”

Mrs. Lippett allowed a moment of silence to fall, then resumed in a slow, placid manner extremely trying to her hearer’s suddenly tightened nerves.

“Usually, as you know, the children are not kept after they are sixteen, but an exception was made in your case. You had finished our school at fourteen, and having done so well in your studies—not always, I must say, in your conduct—it was determined to let you go on in the village high school. Now you are finishing that, and of course the asylum cannot be responsible any longer for your support. As it is, you have had two years more than most.”

Mrs. Lippett overlooked the fact that Jerusha had worked hard for her board during those two years, that the convenience of the asylum had come first and her education second; that on days like the present she was kept at home to scrub.

“As I say, the question of your future was brought up and your record was discussed—thoroughly discussed.”

Mrs. Lippett brought accusing eyes to bear upon the prisoner in the dock, and the prisoner looked guilty because it seemed to be expected—not because she could remember any strikingly black pages in her record.

“Of course the usual disposition of one in your place would be to put you in a position where you could begin to work, but you have done well in school in certain branches; it seems that your work in English has even been brilliant. Miss Pritchard who is on our visiting committee is also on the school board; she has been talking with your rhetoric teacher, and made a speech in your favor. She also read aloud an essay that you had written entitled, ‘Blue Wednesday.’”

Jerusha’s guilty expression this time was not assumed.

“It seemed to me that you showed little gratitude in holding up to ridicule the institution that has done so much for you. Had you not managed to be funny I doubt if you would have been forgiven. But fortunately for you, Mr. ——, that is, the gentleman who has just gone—appears to have an immoderate sense of humor. On the strength of that impertinent paper, he has offered to send you to college.”