A book which relates some of the earlier adventures of the Patty who went to college. The adventures are of the happy, healthy sort in which every girl of school age will delight. Older readers, too, who have already made Patty’s acquaintance as a college girl will enjoy these stories of her younger days. The book is full of humor and innocent pranks and perfect to give to our girls, because it is just clean, wholesome, and refreshing. 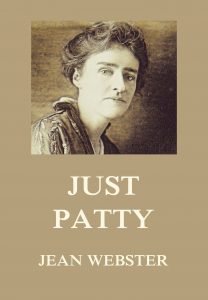 “To separate us now after we’ve been together three years—”

“And it isn’t as though we were awfully bad last year. Lots of girls had more demerits.”

“Only our badness was sort of conspicuous,” Patty admitted.

“But we were very good the last three weeks,” reminded Conny.

“And you should see my new room-mate!” wailed Priscilla.

“She can’t be any worse than Irene McCullough.”

“She is!—Her father’s a missionary, and she was brought up in China. Her name is Keren-happuch Hersey, after Job’s youngest daughter. And she doesn’t think it’s funny!”

“But you should see mine!” cried Patty, in exasperation. “Her name is Mae Mertelle Van Arsdale.”

“Keren studies every second; and expects me to walk on tiptoe so she can concentrate.”

“You should hear Mae Mertelle talk! She said her father was a financier, and wanted to know what mine was. I told her he was a reform judge, and that he spent his time putting financiers in prison. She says I’m an impertinent child,” Patty grinned feebly.

“She’s nineteen, and has been proposed to twice.”

“Mercy! Whatever made her choose St. Ursula’s?”

“Her father and mother ran away and got married when they were nineteen, and they’re afraid she inherited the tendency. So they picked out a good, strict, church school. Mae doesn’t know how she’s ever going to fix her hair without a maid. She’s awfully superstitious about moonstones. She never wears anything but silk stockings and she can’t stand hash. I’ll have to teach her how to make a bed. She always crosses on the White Star Line.”

Patty scattered these details at random. The others listened sympathetically, and added a few of their own troubles.

“Irene weighs a hundred and fifty-nine pounds and six ounces, not counting her clothes,” said Conny. “She brought two trunks loaded with candy. She has it hidden all over the room. The last sound I hear at night, is Irene crunching chocolates—and the first sound in the morning. She never says anything; she simply chews. It’s like rooming with a cow. And I have a sweet collection of neighbors! Kid McCoy’s across the hall, and she makes more noise than half-a-dozen cowboys. There’s a new French girl next door—you know, the pretty little one with the two black braids.”

“She looks rather desirable,” said Patty.

“She might be if she could talk, but she only knows about fifty words. Harriet Gladden’s rooming with her, as limp and mournful as an oyster, and Evalina Smith’s at the end of the corridor. You know what a perfect idiot Evalina is.”

“Lordy’s to blame,” said Conny. “The Dowager never would have separated us if she hadn’t interfered.”

“And I’ve got her!” wailed Patty. “You two have Mam’selle and Waddams, and they’re nice, sweet, unsuspicious lambs; but the girls in the East Wing simply can’t sneeze but Lordy—”

The Latin teacher, in passing, paused on the threshold. Conny disentangled herself from the mixture of clothes and books and sofa cushions that littered the bed, and politely rose to her feet. Patty slid down from the white iron foot-rail, and Priscilla descended from the top of the trunk.

“Ladies don’t perch about on the furniture.”

“No, Miss Lord,” they murmured in unison, gazing back from three pairs of wide, uplifted eyes. They knew, from gleeful past experience, that nothing so annoyed her as smiling acquiescence.

“Put on your uniform, Patty, and finish unpacking. The trunks go down to-morrow morning.”

“Priscilla and Constance, why aren’t you out of doors with the other girls, enjoying this beautiful autumn weather?”

“But we haven’t seen Patty for such a long time, and now that we are separated—” commenced Conny, with a pathetic droop of her mouth.

“I trust that your lessons will benefit by the change. You, Patty and Priscilla, are going to college, and should realize the necessity of being prepared. Upon the thorough foundation that you lay here depends your success for the next four years—for your whole lives, one might say. Patty is weak in mathematics and Priscilla in Latin. Constance could improve her French. Let us see what you can do when you really try.”

She divided a curt nod between the three and withdrew.

“We are happy in our work and we dearly love our teachers,” chanted Patty, with ironical emphasis, as she rummaged out a blue skirt and middy blouse with “St. U.” in gold upon the sleeve.

While she was dressing, Priscilla and Conny set about transferring the contents of her trunk to her bureau, in whatever order the articles presented themselves—but with a carefully folded top layer. The overworked young teacher, who performed the ungrateful task of inspecting sixty-four bureaus and sixty-four closets every Saturday morning, was happily of an unsuspicious nature. She did not penetrate below the crust.

“Lordy needn’t make such a fuss over my standing,” said Priscilla, frowning over an armful of clothes. “I passed everything except Latin.”

“Take care, Pris! You’re walking on my new dancing dress,” cried Patty, as her head emerged from the neck of the blouse.

Priscilla automatically stepped off a mass of blue chiffon, and resumed her plaint.

“I simply can’t study till they take Irene McCullough out of my room,” Conny echoed. “She’s just like a lump of sticky dough.”

“Wait till you get acquainted with Mae Mertelle!” Patty sat on the floor in the midst of the chaos, and gazed up at the other two with wide, solemn eyes. “She brought five evening gowns cut low, and all her shoes have French heels. And she laces—my dears! She just holds in her breath and pulls. But that isn’t the worst.” She lowered her voice to a confidential whisper. “She’s got some red stuff in a bottle. She says it’s for her finger nails, but I saw her putting it on her face.”

“Oh!—not really?” in a horrified whisper from Conny and Priscilla.

Patty shut her lips and nodded.

“I say, let’s mutiny!” cried Priscilla. “Let’s make the Dowager give us back our old rooms in Paradise Alley.”

“But how?” inquired Patty, two parallel wrinkles appearing on her forehead.

“Tell her that unless she does, we won’t stay.”

“That would be sensible!” Patty jeered. “She’d ring the bell and order Martin to hitch up the hearse and drive us to the station for the six-thirty train. I should think you’d know by this time that you can’t bluff the Dowager.”

“There’s no use threatening,” Conny agreed. “We must appeal to her feeling of—of—”

Conny stretched out a hand and brought her up standing.

“Come on, Patty, you’re good at talking. We’ll go down now while our courage is up.—Are your hands clean?”

“I’ll use diplomacy,” Patty whispered, as she turned the knob in response to the summons from within. “You people nod your heads at everything I say.”

Patty did use all the diplomacy at her command. Having dwelt touchingly upon their long friendship, and their sorrow at being separated, she passed lightly to the matter of their new room-mates.

“They are doubtless very nice girls,” she ended politely, “only, you see, Mrs. Trent, they don’t match us; and it is extremely hard to concentrate one’s mind upon lessons, unless one has a congenial room-mate.”

Patty’s steady, serious gaze suggested that lessons were the end of her existence. A brief smile flitted over the Dowager’s face, but the next instant she was grave again.

“It is very necessary that we study this year,” Patty added. “Priscilla and I are going to college, and we realize the necessity of being prepared. Upon the thorough foundation that we lay here, depends our success for the next four years—for our whole lives you might say.”

Conny jogged her elbow warningly. It was too patently a crib from Miss Lord.

“And besides,” Patty added hastily, “all my things are blue, and Mae has a purple screen and a yellow sofa cushion.”