Much Ado About Peter

Much Ado About Peter – Jean Webster

The reader that would have the delightful experience of falling- in love with the Carters’ serving-maid must read ‘Much Ado About Peter’ by Jean Webster. And, incidentally, she who would rather not fall in love with the Carters’ groom had better avoid this collection of short stories about Annie O’Reilly and Peter Malone. These ten tales of life from the viewpoint of those below stairs all have the same hero and heroine, and the fact that the conclusion brings them to the usual fate of lovers gives the book the semblance of a novel. Besides Annie and Peter, the gardener Vittorio, late of the Bersaglieri Corps, who fought Menelek in Abyssinia, makes a palpable showing in a bid for the reader’s sympathy. How the meek Italian gave Peter and the coachman a lesson in target shooting makes a story which will give the ordinary person a choky feeling in the region of his sentiment. There is much crisp dialogue, and a good deal of sunshiny humor throughout, and if some of the escapades related seem a little less than realistic, the wholesome preachments to which they act as vehicles are none the less pertinent and enjoyable. 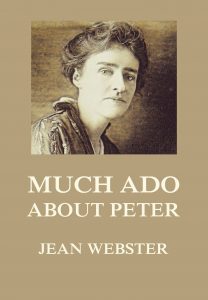 Much Ado About Peter.

Much Ado About Peter.

Peter and Billy, the two upper grooms at Willowbrook, were polishing the sides of the tall mail phaeton with chamois-skin rubbers and whistling, each a different tune, as they worked. So intent were they upon this musical controversy that they were not aware of Mrs. Carter’s approach until her shadow darkened the carriage-house doorway. She gathered up her skirts in both hands and gingerly stepped inside. Peter had been swashing water about with a liberal hand, and the carriage-house floor was damp.

“Where is Joe?” she inquired.

“He’s out in the runway, ma’am, jumpin’ Blue Gipsy. Shall I call him, ma’am?” Billy answered, as the question appeared to be addressed to him.

She advanced into the room, walking as nearly as possible on her heels. It was something of a feat; Mrs. Carter was not so light as she had been twenty-five years before. Peter followed her movements with a shade of speculative wonder in his eye; should she slip it would be an undignified exhibition. There was even a shade of hope beneath his respectful gaze.

“Why do you use so much water, Peter? Is it necessary to get the floor so wet?”

“It is very unpleasant to walk in.”

Peter winked at Billy with his off eye, and stood at attention until she should have finished her examination of the newly washed phæton.

“The cushions are dripping wet,” she observed.

“I washed ’em on purpose, ma’am. They was spattered thick with mud.”

“There is danger of spoiling the leather if you put on too much water.”

She turned to an inspection of the rest of the room, sniffing dubiously in the corner where the harness greasing was carried on, and lifting her skirts a trifle higher.

“It’s disgustingly dirty,” she commented, “but I suppose you can’t help it.”

“Well,” she resumed, returning to her errand with an appearance of reluctance, “I want you, William—or Peter either, it doesn’t matter which—to drive into the village this evening to meet the eight-fifteen train from the city. I am expecting a new maid. Take Trixy and the buckboard and bring her trunk out with you. Eight-fifteen, remember,” she added as she turned toward the doorway. “Be sure to be on time, for she won’t know what to do.”

They watched in silence her gradual retreat to the house. She stopped once or twice to examine critically a clipped shrub or a freshly spaded flower-bed, but she finally passed out of hearing. Billy uttered an eloquent grunt; while Peter hitched up his trousers in both hands and commenced a tour of the room on his heels.

“William,” he squeaked in a high falsetto, “you’ve spilt a great deal more water than is necessary on this here floor. You’d ought to be more careful; it will warp the boards.”

“An’ goodness me! What is this horrid stuff in this box?” He sniffed daintily at the harness grease. “How many times must I tell you, William, that I don’t want anything like that on my harnesses? I want them washed in nice, clean soap an’ water, with a little dash of ee-oo-dee cologne.”

“An’ now, Peter,” Peter resumed, addressing an imaginary self, “I am expectin’ a new maid to-night—a pretty little French maid just like Annette. I am sure that she will like you better than any o’ the other men, so I wish you to meet her at the eight-fifteen train. Be sure to be on time, for the poor little thing won’t know what to do.”

“She didn’t either,” said Peter, quickly reassuming his proper person. “She said either of us, which ever was most convenient, an’ I’ve got to go into town anyway on an errand for Miss Ethel.”

“Hey, Joe,” called Billy, as the coachman’s steps were heard approaching down the length of the stable, “Mrs. Carter come out here an’ said I was to meet a new maid to-night, an’ Pete says he’s goin’ to. Just come an’ tell him to mind ‘is own business.”

Joe appeared in the doorway, with a cap cocked on the side of his head, and a short bull-dog pipe in his mouth. It was strictly against the rules to smoke in the stables, but Joe had been autocrat so long that he made his own rules. He could trust himself—but woe to the groom who so much as scratched a safety-match within his domain.

“A new maid is it?” he inquired, as a grin of comprehension leisurely spread itself across his good-natured rubicund face. “I s’pose you’re thinking it’s pretty near your turn, hey, Billy?”

“You’re awful particular all of a sudden about obeying orders,” said Joe. “I don’t care which one of you fetches out the new maid,” he added. “I s’pose if Pete wants to, he’s got the first say.”

The Carter stables were ruled by a hierarchy with Joe at the head, the order of precedence being based upon a union of seniority and merit. Joe had ruled for twelve years. He had held the position so long that he had insidiously come to believe in the divine right of coachmen. Nothing short of a revolution could have dislodged him against his will; in a year or so, however, he was planning to abdicate in order to start a livery stable of his own. The money was even now waiting in the bank. Peter, who had commenced as stable-boy ten years before, was heir-presumptive to the place, and the shadow of his future greatness was already upon him. Billy, who had served but a few meagre months at Willowbrook, did not realize that the highest honours are obtained only after a painful novitiate. He saw no reason why he should not be coachman another year just as much as Peter; in fact, he saw several reasons why he should be. He drove as well, he was better looking—he told himself—and he was infinitely larger. To Billy’s simple understanding it was quantity, not quality, that makes the man. He resented Peter’s assumption of superiority, and he intended, when opportunity should present itself, to take it out of Peter.

“I don’t care about fetchin’ out the new maid any more than Billy,” Peter nonchalantly threw off after a prolonged pause, “only I’ve got to take a note to the Holidays for Miss Ethel, and I’d just as lief stop at the station; it won’t be much out o’ me way.”

Peter smiled slightly as he fell to work again, humming under his breath a song that was peculiarly aggravating to Billy. “Je vous aime, je vous adore,” it ran. Peter trilled it, “Gervie zame, gervie door,” but it answered the purpose quite as well as if it had been pronounced with the best Parisian accent.

The last maid—the one who had left four days before—had been French, and during her three weeks’ reign at Willowbrook she had stirred to its foundations every unattached masculine heart on the premises. Even Simpkins, the elderly English butler, had unbent and smiled foolishly when she coquettishly chucked him under the chin in passing through the hall. Mary, the chambermaid, had been a witness to this tender passage, and poor Simpkins’s dignity ever since had walked on shaky ground. But Annette’s charms had conquered more than Simpkins. Tom, the gardener, had spent the entire three weeks of her stay in puttering about the shrubs that grew in the vicinity of the house; while the stablemen had frankly prostrated themselves—with the exception of Joe, who was married and not open to Gallic allurements. It was evident from the first, however, that Peter and Billy were the favoured ones. For two weeks the race between them had been even, and then Peter had slowly, but perceptibly, pulled ahead.

He had returned one morning from an errand to the house with a new song upon his lips. It was in the French language. He sang it through several times with insistent and tender emphasis. Billy maintained a proud silence as long as curiosity would permit; finally he inquired gruffly:

“It’s a song,” said Peter, modestly. “Annette taught it to me,” and he hummed it through again.

“What does it mean?”

This episode was the beginning of strained relations between the two. There is no telling how far their differences would have gone, had the firebrand not been suddenly removed.

One morning Joe was kept waiting under the porte-cochère unusually long for Mrs. Carter to start on her daily progress to the village, but instead of Mrs. Carter, finally, his passenger was Annette—bound to the station with her belongings piled about her. Joe had a wife of his own, and it was none of his affair what happened to Annette, but he had observed the signs of the weather among his underlings, and he was interested on their account to know the wherefore of the business. Annette, however—for a French woman—was undemonstrative. All that Joe gathered in return for his sympathetic questions (they were sympathetic; Joe was human even if he was married) was a series of indignant sniffs, and the assertion that she was going because she wanted to go. She wouldn’t work any longer in a place like that; Mrs. Carter was an old cat, and Miss Ethel was a young one. She finished with some idiomatic French, the context of which Joe did not gather.

Billy received the news of the departure with unaffected delight, and Peter with philosophy. After all, Annette had only had three weeks in which to do her work, and three weeks was too short a space for even the most fetching of French maids to stamp a very deep impression upon Peter’s roving fancy. Four days had passed and his wound was nearly healed. He was able to sit up and look about again by the time that Mrs. Carter ordered the meeting of the second maid. Ordinarily the grooms would not have been so eager to receive the assignment of an unallotted task, but the memory of Annette still rankled, and it was felt between them that the long drive from the station was a golden opportunity for gaining a solid start in the newcomer’s affections.