Here is one of the best, if not the best, stories of mystery and tragedy of the 1900 years. To ‘Four-Pools,’ a quiet stock-farm set in the beautiful Shenandoah Valley, comes a worn-out New York lawyer for a vacation. He is a witness of many curious things and of the final tragedy. The unraveling of the mysteries which follow each other with a cumulative interest is due to a clever New York newspaper chap. It’s an unusual and stirring story, in which the portrayal of life on a Southern plantation and the horror and fear roused in the negroes by what they believed manifestations of the ancestral ‘ha’nt’ is clearly and vividly done. A book that will keep its readers up nights. 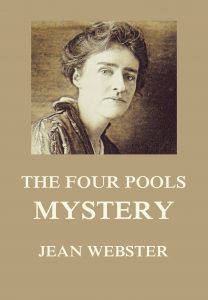 As I rolled southward in the train—”jerked” would be a fitter word; the roadbeds of western Virginia are anything but level—I strove to recall my old time impressions of Four-Pools Plantation. It was one of the big plantations in that part of the state, and had always been noted for its hospitality. My vague recollection of the place was a kaleidoscopic vision of music and dancing and laughter, set in the moonlit background of the Shenandoah Valley. I knew, however, that in the eighteen years since my boyhood visit everything had changed.

News had come of my aunt’s death, and of Nan’s runaway marriage against her father’s wishes, and of how she too had died without ever returning home. Poor unhappy Nannie! I was but a boy of twelve when I had seen her last, but she had impressed even my unimpressionable age with a sense of her charm. I had heard that Jeff, the elder of the two boys, had gone completely to the bad, and having broken with his father, had drifted off to no one knew where. This to me was the saddest news of all; Jeff had been the object of my first case of hero worship.

I knew that Colonel Gaylord, now an old man, was living alone with Radnor, who I understood had grown into a fine young fellow, all that his brother had promised. My only remembrance of the Colonel was of a tall dark man who wore riding boots and carried a heavy trainer’s whip, and of whom I was very much afraid. My only remembrance of Rad was of a pretty little chap of four, eternally in mischief. It was with a mingled feeling of eagerness and regret that I looked forward to the visit—eagerness to see again the scenes which were so pleasantly associated with my boyhood, and regret that I must renew my memories under such sadly changed conditions.

As I stepped from the train, a tall broad-shouldered young man of twenty-three or thereabouts, came forward to meet me. I should have recognized him for Radnor anywhere, so striking was his resemblance to the brother I had known. He wore a loose flannel shirt and a broad-brimmed felt hat cocked on one side, and he looked so exactly the typical Southern man of the stage that I almost laughed as I greeted him. His welcome was frank and cordial and I liked him from the first. He asked after my health with an amused twinkle in his eyes. Nervous prostration evidently struck him as humorously as it did Terry. Lest I resent his apparent lack of sympathy however, he added, with a hearty whack on my shoulder, that I had come to the right place to get cured.

A drive over sweet smelling country roads behind blooded horses was a new experience to me, fresh from city streets and the rumble of elevated trains. I leaned back with a sigh of content, feeling already as if I had got my boyhood back again.

Radnor enlivened the three miles with stories of the houses we passed and the people who lived in them, and to my law-abiding Northern ears, the recital indubitably smacked of the South. This old gentleman—so Rad called him—had kept an illicit still in his cellar for fifteen years, and it had not been discovered until after his death (of delirium tremens). The young lady who lived in that house—one of the belles of the county—had eloped with the best man on the night before the wedding and the rightful groom had shot himself. The one who lived here had eloped with her father’s overseer, and had rowed across the river in the only available boat, leaving her outraged parent on the opposite bank.

I finally burst out laughing.

“Does everyone in the South run away to get married? Don’t you ever have any legitimate weddings with cake and rice and old shoes?” As I spoke I remembered Nannie and wondered if I had touched on a delicate subject.

But Radnor returned my laugh.

“We do have a good many elopements,” he acknowledged. “Maybe there are more cruel parents in the South.” Then he suddenly sobered. “I suppose you remember Nan?” he inquired with an air of hesitation.

“Poor girl!” he said. “I’m afraid she had a pretty tough time. You’d best not mention her to the old gentleman—or Jeff either.”

“Does the Colonel still feel hard toward them?”

“He doesn’t forgive,” he returned.

“What was the trouble with Jeff?” I ventured. “I have never heard any particulars.”

“He and my father didn’t agree. I don’t remember very much about it myself; I was only thirteen when it happened. But I know there was the devil of a row.”

“I sent him some money once or twice, but my father found it out and shut down on my bank account. I’ve lost track of him lately—he isn’t in need of money though. The last I heard he was running a gambling place in Seattle.”

Radnor echoed my sigh but he did not choose to follow up the subject, and we passed the rest of the way in silence until we turned into the lane that led to Four-Pools. After the manner of many Southern places the house was situated well toward the middle of the large plantation, and entirely out of sight from the road. The private lane which led to it was bordered by a hawthorn hedge, and wound for half a mile or so between pastures and flowering peach orchards. I delightedly breathed in the fresh spring odors, wondering meanwhile how it was that I had let that happy Virginia summer of my boyhood slip so entirely from my mind.

As we rounded a clump of willow trees we came in sight of the house, set on a little rise of ground and approached by a rolling sweep of lawn. It was a good example of colonial—white with green blinds, the broad brick floored veranda, which extended the length of the front, supported by lofty Doric columns. On the south side a huge curved portico bulged out to meet the driveway. Stretching away behind the house was a sleepy box-bordered garden, and behind this, screened by a row of evergreens, were clustered the barns and out-buildings. Some little distance to the left, in a slight hollow and half hidden by an overgrowth of laurels, stood a row of one-story weather-beaten buildings—the old negro cabins, left over from the slave days.

“It’s just as I remember it!” I exclaimed delightedly as I noted one familiar object after another. “Nothing has changed.”

“Nothing does change in the South,” said Radnor, “except the people, and I suppose they change everywhere.”

“And those are the deserted negro cabins?” I added, my eye resting on the cluster of gray roofs showing above the shrubbery.

“Just at present they are not so deserted as we should like,” he returned with a suggestive undertone in his voice. “You visit the plantation at an interesting time. The Gaylord ha’nt has reappeared.”

“The Gaylord ha’nt!” I exclaimed in astonishment. “What on earth is that?”

“One of our godless ancestors once beat a slave to death and his ghost comes back, off and on, to haunt the negro cabins. We hadn’t heard anything of him for a good many years and had almost forgotten the story, when last week he reappeared. Devil fires have been seen dancing in the laurels at night, and mysterious moanings have been heard around the cabins. If you have ever had anything to do with negroes, you can know the state our servants are in.”

“Well!” said I, “that promises entertainment. I shall look forward to meeting the ha’nt.”

We had reached the house by this time, and as we drew up before the portico the Colonel stood on the top step waiting to welcome me. He was looking much as I remembered him except that his hair had turned from black to white, and his former imperious bearing had become a trifle querulous. I jumped out and grasped his outstretched hand.

My heart warmed toward the old man’s “my boy.” It had been a good many years since anyone had called me that.

“You’ve grown since I saw you last,” he chuckled, as he led the way into the house through the group of negro servants who had gathered to see me arrive.

My first fleeting glimpse through the open doors told me that it was indeed true, as Radnor had said, nothing had changed. The furniture was the same old-fashioned, solidly simple furniture that the house had contained since it was built. I was amused to see the Colonel’s gloves and whip thrown carelessly on a chair in the hall. The whip was the one token by which I remembered him.

“So you’ve been working too hard, have you, Arnold?” the old man inquired, looking me over with twinkling eyes. “We’ll give you something to do that will make you forget you’ve ever seen work before! There are half a dozen colts in the pasture just spoiling to be broken in; you may try your hand at that, sir. And now I reckon supper’s about ready,” he added. “Nancy doesn’t allow any loitering when it’s a question of beat biscuits. Take him up to his room, Rad—and you Mose,” he called to one of the negroes hanging about the portico, “come and carry up Marse Arnold’s things.”

At this one of them shambled forward and began picking up my traps which had been dumped in a pile on the steps. His appearance struck me with such an instant feeling of repugnance, that even after I was used to the fellow, I never quite overcame that first involuntary shudder. He was not a full-blooded negro but an octoroon. His color was a muddy yellow, his features were sharp instead of flat, and his hair hung across his forehead almost straight. But these facts alone did not account for his queerness; the most uncanny thing about him was the color of his eyes. They had a yellow glint and narrowed in the light. The creature was bare-footed and wore a faded suit of linsey-woolsey; I wondered at that, for the other servants who had crowded out to see me, were dressed in very decent livery.

Radnor noticed my surprise, and remarked as he led the way up the winding staircase, “Mose isn’t much of a beauty, for a fact.”

I made no reply as the man was close behind, and the feeling that his eyes were boring into the middle of my back was far from pleasant. But after he had deposited his load on the floor of my room, and, with a sidewise glance which seemed to take in everything without looking directly at anything, had shambled off again, I turned to Rad.

“What’s the matter with him?” I demanded.

Radnor threw back his head and laughed.