A study of the remains of the native religious literature of ancient Egypt which have come down to us has revealed the fact that the belief in magic, that is to say, in the power of magical names, and spells, and enchantments, and formulæ, and pictures, and figures, and amulets, and in the performance of ceremonies accompanied by the utterance of words of power, to produce supernatural results. 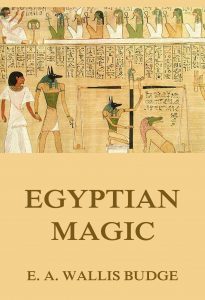 “There is no doubt”, he said of Egyptian religions in Osiris and the Egyptian Resurrection (1911), “that the beliefs examined herein are of indigenous origin, Nilotic or Sundani in the broadest signification of the word, and I have endeavoured to explain those which cannot be elucidated in any other way, by the evidence which is afforded by the Religions of the modern peoples who live on the great rivers of East, West, and Central Africa . . . Now, if we examine the Religions of modern African peoples, we find that the beliefs underlying them are almost identical with those Ancient Egyptian ones described above. As they are not derived from the Egyptians, it follows that they are the natural product of the religious mind of the natives of certain parts of Africa, which is the same in all periods.”
Budge’s contention that the religion of the Egyptians was derived from similar religions of the people of northeastern and central Africa was regarded as impossible by his colleagues. At the time, all but a few scholars followed Flinders Petrie in his theory that the culture of Ancient Egypt was derived from an invading Caucasoid “Dynastic Race,” which had conquered Egypt in late prehistory and introduced the Pharaonic culture.

Budge’s works were widely read by the educated public and among those seeking comparative ethnological data, including James Frazer. He incorporated some of Budge’s ideas on Osiris into his ever-growing work on comparative religion, The Golden Bough.

Budge was also interested in the paranormal, and believed in spirits and hauntings. Budge had a number of friends in the Ghost Club (British Library, Manuscript Collections, Ghost Club Archives), a group in London committed to the study of alternative religions and the spirit world. He told his many friends stories of hauntings and other uncanny experiences. Many people in his day who were involved with the occult and spiritualism after losing their faith in Christianity were dedicated to Budge’s works, particularly his translation of the Egyptian Book of the Dead. Such writers as the poet William Butler Yeats and James Joyce studied and were influenced by this work of ancient religion. Budge’s works on Egyptian religion have remained consistently in print since they entered the public domain.

Budge was a member of the literary and open-minded Savile Club in London, proposed by his friend H. Rider Haggard in 1889, and accepted in 1891. He was a much sought-after dinner guest in London, his humorous stories and anecdotes being famous in his circle. He enjoyed the company of the well-born, many of whom he met when they brought to the British Museum the scarabs and statuettes they had purchased while on holiday in Egypt. Budge never lacked for an invitation to a country house in the summer or to a fashionable townhouse during the London season.

Though Budge’s books remain widely available, since his day both translation and dating accuracy have improved, leading to significant revisions. The common writing style of his era—a lack of clear distinction between opinion and incontrovertible fact—is no longer acceptable in scholarly works.