John Calvin’s Commentaries On St. Paul’s Epistle To The Romans

His commentaries cover the larger part of the Old Testament, and all of the new excepting Second and Third John and the Apocalypse. His commentaries and lectures stand in the front rank of Biblical interpretation. On no portion of The New Testament have so many Commentaries been written as on the Epistle to the Romans. We have indeed no separate Comment extant by any of the Fathers on this Epistle; though it has been explained, together with other parts of Scripture, by Origen in the third century; by Jerome, Chrysostom, and in part by Augustine, in the fourth; by Theodoret in the fifth; by Ecumenius in the tenth; and by Theophylact in the eleventh century. But since the Reformation, many separate Expositions have been published, beside a learned Introduction by Luther, and Notes or Scholia by Zuingle and Melancthon. 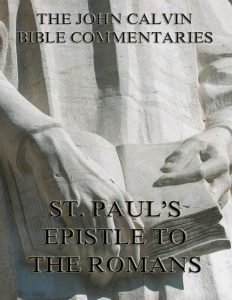 John Calvin’s Commentaries On St. Paul’s Epistle To The Romans

John Calvin’s Commentaries On St. Paul’s Epistle To The Romans.