Louis Claude de Saint-Martin was a French philosopher, also known as “le philosophe inconnu”. Under the influence of Martinez de Pasquales, who taught him a species of mysticism drawn from cabbalistic sources, he founded a cult of secret, magical and theurgical rites. He went on to become one of the major preachers of mysticism. Arthur Edward Waite’s biography of his life is one of the most detailed works about this man, who was influential on the formation of the Hermetic Order of the Golden Dawn. 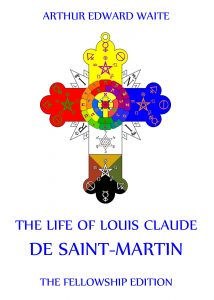 He was born at Amboise, into a poor but noble family.

As his father wished, he tried first law and then the army as a profession. While in the garrison at Bordeaux, he came under the influence of Martinez de Pasqually, usually called a Portuguese Jew (although later research has revealed the probability that he was a Spanish Catholic), who taught a species of mysticism drawn from cabbalistic sources, and endeavoured to found thereon a secret cult with magical or theurgical rites. Around September 1768 Saint-Martin was introduced to the Elect Coëns. From 1768 until 1771, Saint-Martin worked at Bordeaux as secretary to Martinez de Pasqually.

In 1771, Saint-Martin left the army to become a preacher of mysticism. Same year he was living with Jean-Baptiste Willermoz at Lyon, while writing his first book. His conversational powers made him welcome in Parisian salons; but his zeal led him to England, where he made the acquaintance of William Law, the English mystic, and to Italy and Switzerland, as well as to the chief towns of France. In February 1784, Saint-Martin joined Society of Harmony in Paris. In 1787, he met William Law on a trip to London. From 1788 until 1791 he resided at Strasbourg, where he met Baron Karl Göran Silfverhjelm, the nephew of Emanuel Swedenborg. At Strasbourg, in 1788, he met Charlotte de Boecklin, who introduced him to the writings of Jakob Böhme. In July 1790, he resigned from Rectified Scottish Rite and asked Jean-Baptiste Willermoz for his name to be removed from all Masonic registers. In 1792, Saint-Martin began corresponding with the Swiss theosopher Niklaus Anton Kirchberger von Liebisdorf.

A nobleman, he was interned and his property was confiscated during the French Revolution. He was later freed by local officials, who wanted him to become a school teacher. He was brought up a strict Catholic, and always remained attached to the Church, although his first work, Of Errors and Truth, was placed upon the Index. He died at Aulnay (now Châtenay-Malabry), from October 13 to October 14, 1803.